Little Ones Theatre have created a psychedelically camp but incredibly enjoyable production.
Mark Taylor
[This is archived content and may not display in the originally intended format.] 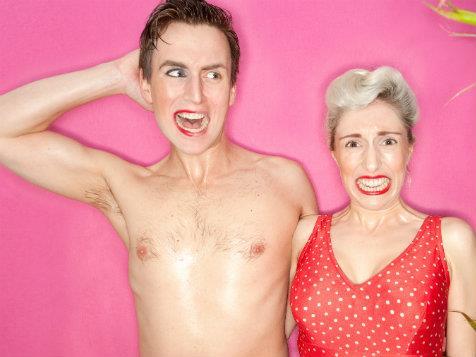 Walking past a set covered in leopard print from floor to ceiling to take one’s seat in Brisbane Festival venue The Loft immediately suggests that Psycho Beach Party is to be, perhaps, a rather camp offering. Once the performers emerge through the rear-lit glitter curtain, this impression is confirmed; Little Ones Theatre have created a psychedelically camp but incredibly enjoyable night out featuring a nerdy genius, B-grade horror movie glamour, a mentally unstable single mother, a closeted gay couple, a failed med student and a surfer god. In other words, rambunctious fun.

Charles Busch’s playful pastiche is set in Malibu in the swinging 60’s, a place where surfers ruled. But this beachside haven is suddenly turned on its head. The community is on edge: peculiar attacks are occurring on unsuspecting beachgoers, leaving them hair-free and terrified. Young Chicklet is not as developed as the other girls, but doesn’t care; all she wants to do is learn to surf. These desires however are met with overtly twee and cringe-worthy laughter by the ‘too cool for school’ beach bums, but any concerns that the intentional over-acting could get old are quickly diminished as the plot thickens and the ludicrous story takes you on an unusual ride.

Every performer captures their character brilliantly, from the obligatory goofy stances to the delivery of naff jokes in a manner that could put Greg Brady to shame. Ash Flanders as Chicklet, however, steals the show. This character truly puts the psycho into the mix, and Flanders’ seamless transitions through Chicklet’s many personalities are awe-inspiring, hilarious, and a little creepy. The riotous talent quest performance involving ‘choreographed’ skipping was to me worth the ticket price alone, and any soundtrack that includes the B52’s ‘Rock Lobster’ gets my vote. This is just one highlight of a night full of great tracks, often accompanied by the kind of dance moves any play set in the swinging 60’s simply has to include.

The animal fur covered beach umbrella and beach chairs on the leopard print set sufficiently support all the action, with the simplicity of the design allowing for seamless scene changes and never a moment nor a need to check your watch.

Psycho Beach Party plucks all that’s enjoyable about a 60’s B-grade horror film, from corny overacting to ludicrous analogies, and places it onto the stage, resulting in a laugh out loud psycho-palooza. If life is feeling a little serious, these joyous 80 minutes will bring it all back into focus.

As Manager - Open Stage at Opera Queensland Mark oversees the company's well established education offerings, promotes and oversees the new community workshop programs and works with sponsors and funders to make these initiatives possible. Mark also manages High Notes, a corporate venture designed to allow companies in Brisbane and throughout Queensland to hire professional singers and musicians for corporate and private events and festivals. Mark holds a Bachelor of Education degree (majoring in music) and a Master of Education (leadership and management).