A thrilling exploration of physical potential, choreography celebrating the limits of endeavour.
Nerida Dickinson
[This is archived content and may not display in the originally intended format.] 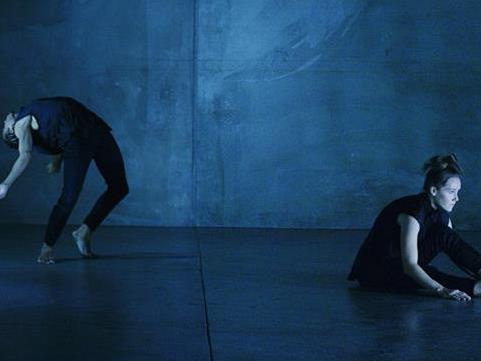 Silence, blackness, and then two narrow shafts of light spill across the stage to reveal four still bodies, standing, waiting. Abruptly, feet squeak against the floor as two bodies sprint forwards, inwards from diagonally opposite corners of the stage, stopping dead in the centre, eyeing each other, tension high. Slowly stepping around each other, never losing eye contact, they sprint on, away from each other. Silence. The other pair of bodies swaps sides in the same way. Remarkably, with no sound cues, at staggered times and at different paces – from saunter to barely pausing for a twirling leap in the middle – all four dancers maintain symmetry and intensity of regard with each other.

The unity of purpose, responsive movement and precise timing of the opening continues through the entire performance, but in a myriad of fashions, some complex, some mechanically simple but undoubtedly challenging in execution for human bodies. Choreographer Rachel Arianne Ogle presents an intriguing visual feast, tying together with stark and brutal lighting from Benjamin Cisterne and Luke Smiles / motion laboratories’ sound design that is more a technological soundscape than conventional soundtrack, the resultant whole assaulting the senses and stirring emotions. Kristy Armstrong’s costuming also plays a strong part, with the fabric selection working with the areas of deep shadow on stage to catch light and create shimmers of movement, drawing the eye beyond the obvious performance space.

Niharika Senapati maintains a haunted stare throughout the performance, intensely interacting other performers but often gazing into the ineffable, drawing attention to her distant point of contemplation. Her solo sections draw us in with her whole body reaching, yearning and striving for this elusive focal point, perpetually fluid in motion even when contorting into ungainly, unnatural poses in response to her companions and most impressively maintaining her legato motions while being dragged across the floor. Tyrone Robinson also maintains consistent facial work, but in his case it is a challenging, confronting stare. His solo work just to the side of the light, a flickering reflection of controlled movement, is a study in strongly held static poses and sudden bursts of freely whirling movements, impresses with its contrast to the patterns of tight unison exhibited by his three colleagues at that point.

Captivating choreography brought to life not only by the skills of the dancers but by a thoughtful embrace of all aspects of stage presentation, precipice is a mighty experience for an audience beyond aficionados of contemporary dance.