MALTHOUSE: A sudden noise that wakes you in the night. A shadowy movement glimpsed down a darkened alley. A visceral, theatrical exploration of fear.
Richard Watts 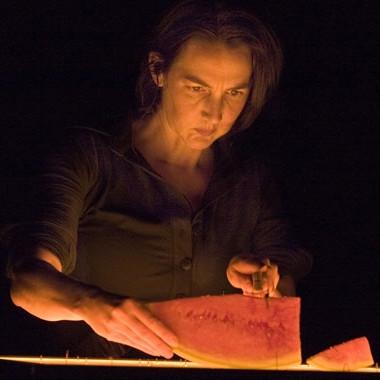 Originally staged in an all-too-brief season at the City of Melbourne’s Arts House in 2010, this genuinely startling one-woman show by Tamara Saulwick is a theatrical exploration of the experience of fear; an evocation of those incidents, events and imaginings that cause your pulse to quicken and raise the hairs on the back of your neck.

Clad in boots and a blue dress which she occasionally smoothes across her lap or picks invisible specks from, Saulwick recounts moments of genuine terror as told to her by a range of interviewees, women and girls ranging from six to 92 years of age.

Walking into your house to discover a man hiding in your wardrobe. Waking suddenly in the middle of the night as someone tries to break down your door. A late night train trip in an unknown country. A frantic race through a lonely forest. An obscene, threatening phone call.

Sometimes Saulwick embodies their stories, speaking their words in her own voice but copying their every inflection, stammer and pause. At other times she shares the stage with the interviewees’ fractured voices as their tales echo unpredictably from a series of speakers set around the theatre.

On many occasions the stage is plunged into darkness, with Saulwick’s voice whispering threats and fears; the unseen antagonist of your worst nightmares. At other times she crouches over a small light, illuminated for fleeting moments in a series of grotesque tableaux; or stands at the rear of the stage, a vast and threatening shadow looming over her.

Saulwick’s vocal mimicry of the interviewee’s voices is remarkable, her physicality controlled and assured. Only at one point, late in the show, when she talks about being paralysed with fear while executing a series of rapid, repetitive movements choreographed by Michelle Heaven, do Saulwick’s physical actions jar with her spoken narrative.

But as impressive as Saulwick’s performance is, it’s Peter Knight’s sound design that is the real star of this show: a haunting mix of brooding, blasting music, looped voices, echoing footsteps, and seemingly innocuous sounds – scissors cutting, a zip unzipping – that take on terrifying implications when amplified. Coupled with the evocative and atmospheric lighting design by Bluebottle, Knight’s sound work is striking in the extreme.

Perhaps most fascinating of all is how deeply gendered a performance Pin Drop is. While I was awed by the technical proficiency of the production and empathised with the stories Saulwick was recounting, Pin Drop failed to resonate with me emotionally. The fears explored in the performance are not my fears; they were not familiar to me. This is certainly not a criticism of the show, which is remarkable in the extreme, but perhaps an indication of the deeply personal nature of fear itself; particularly the fears that Saulwick taps into, given that all the women I spoke to after the show were deeply engaged by what they had just witnessed – even, in some cases, disturbed.