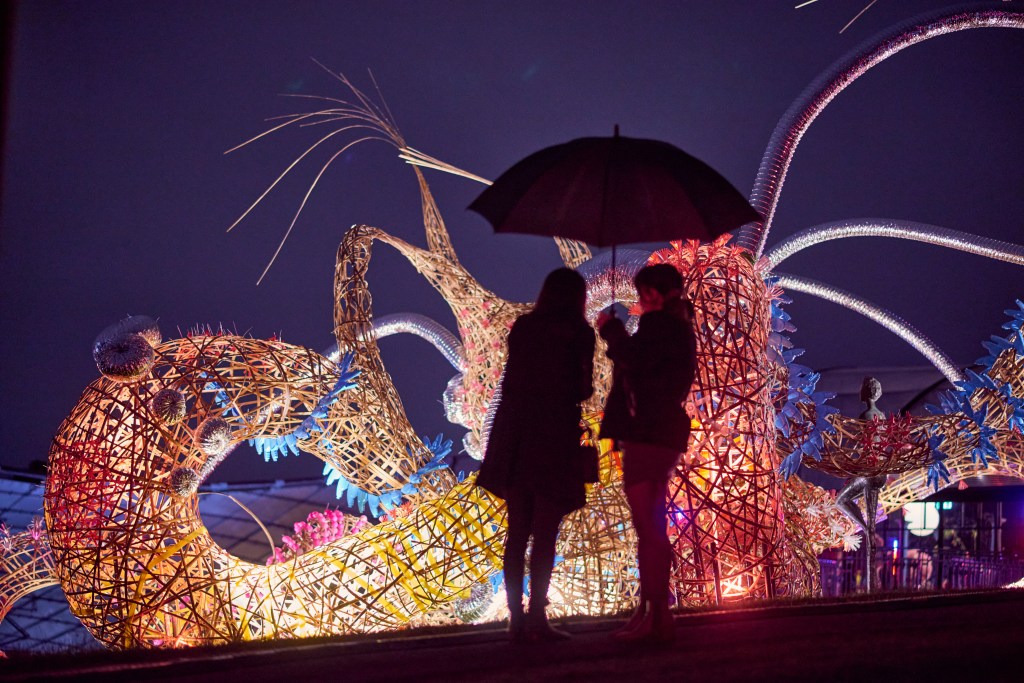 The Wilds offers ‘an opportunity for everyone and anyone to tap into wonder and curiosity.’ Photo by Eugene Hyland.

Walking through the crunch of autumn leaves towards the gates of the Sidney Myer Music Bowl, I felt an impending sense of wonder and curiosity as large, illuminated objects began to glow in the distance and a reverberating hum of sounds circulated the night air. It was a surprisingly busy night out, considering we are in the middle of a vicious cold snap here in Melbourne.

The Wilds, as part of Melbourne’s RISING Festival, has transformed The Bowl into a moonlit wonderland of multi-sensory experiences. It is art, music, sound, and performance that blurs the boundaries of the organic and manufactured, science and psychedelia. I have never witnessed the iconic Melbourne venue like this before.

Upon entering the gates, smoke swirls upwards from glowing pond and I get the feeling I am entering some kind of magical realm. The senses are immediately loaded. The auditory sense is activated by a complex soundscape developed by sound artists Mark Mitchell and Pascal Babare. It is an impressive layering of processed ambient resonances, dispersed with the terrestrial noises and ethereal, trancey notes. It seems to come from everywhere and nowhere at once.

Visual stimulation is initiated by rectangular screens that appear to protrude from earth, displaying luminous moving spheres. The creation of New York City-based Australian artists Tin & Ed, these bright structures look part video game graphics and something out of a chemistry textbook.

Sometimes it was hard to know where to place your attention.

A procession of energetic performers in tights and puffy neck pieces shuffle down a path to what looks like a cave entrance. The performers, known as Discordia, playfully manoeuvre around the live exhibition throughout the night.

Giant inflatable 3D sculptures are plotted over the slopes surrounding the bowl. These stationary blobs morph colours that appears to give them life. They look like something out of a child’s imagination and the kids are certainly enthralled, but the adults seem equally as impressed.

Also inhabiting the grassed amphitheatre are Leeroy New’s structures of ‘bamboo bones’, made of recycled materials from last year’s The Wilds. People wander around and through them and it feels as though you’re inside a giant, woven, dinosaur skeleton maze. They gaze over the amphitheatre and almost look right down into the bowl itself.

In the belly of the bowl is the Rinky Dink ice skating rink, packed with rugged-up Melburnians clumsily attempting to ice skate. It is certainly not our natural habitat. Here there is another sonic landscape of synthesised ethereal hums punctured with more animal-like noises. Several giant inflatable creatures hang from the roof, overseeing the crowd. Rising to the top of the soundscape are the uplifting voices of the Night Chorus, who heartfully belt out reimagined retro ‘80s and ‘90s hits, from Adele to Queen to Toto.

In true Melbourne style, the food and drink offerings are first class with a stellar line-up of Melbourne icons, including San Telmo Group, Smith and Daughter and 1800 Lasagne. The latter also being responsible for some extra funky DJ tunes.

The Wilds is an exceptional sensory experience. Judging by overheard conversations it is clearly a hit with kids and adults alike, affording an opportunity for everyone and anyone to tap into wonder and curiosity. I think we all need a bit of this after surviving the past few years in Melbourne.