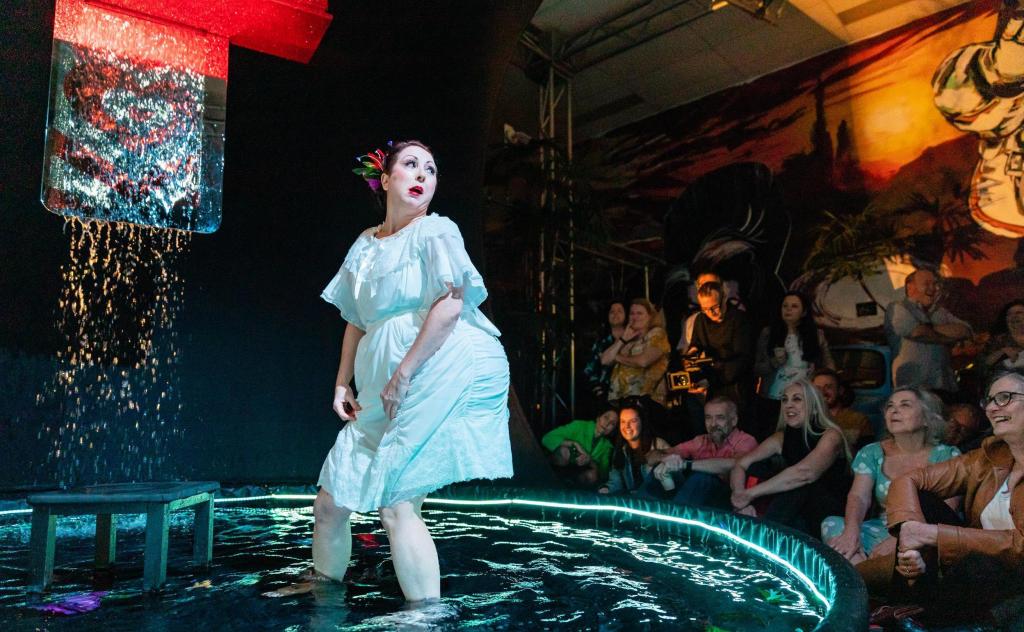 Perspectives on plastic surgery and the authentic self are explored with wit and insight in Meat Mirror. Photo credit: Joe Ruckli.

Brisbane-based artist Jay Younger and performer/choreographer Lisa O’Neill present Meat Mirror, a new feminist artwork that takes form as a performance-activated installation with the BBL (Brazilian Butt Lift) as its subject. It encompasses a four-metre pool, flowers, and an upturned red glitter vanity with a waterfall running down the face of the vanity’s mirror. For the duration of the exhibition, the multimedia installation comes alive with an eerily captivating performance by Lisa O’Neill.

Meat Mirror is presented amongst the plants at Mappins Nursery + Aquarium in Brisbane’s West End. If you have been to Mappins, you will know that going there is like stepping into a 1970s discotheque surrounded by flora and fauna. It is here that Younger and O’Neill bring to life a vision for an ‘aqua-musical’ performance that highlights the dark side of the cosmetic surgery industry in Australia. Surrounded by succulents (plant-based and booty-based), we are immersed in a performance where natural and unnatural beauty collide.

Meat Mirror tells the story of a semi-retired synchronized swimmer who, through trials and tribulations, decides to undertake cosmetic surgery. In this case, the swimmer chooses the BBL. The character’s aesthetic is modelled on Esther Williams (1921-2013), a glamorous swimmer and actress who was termed ‘Hollywood’s Mermaid’. In this performance, O’Neill effortlessly presents the grace, ease and style of a Hollywood starlet who is headed for troubled waters. The character enters the aquatic stage in a white frilly dress, picks up flowers from the water below and executes aqua aerobics. While her actions are sweet and innocent, the movements are almost too perfect,as if they are being watched by some invisible judge of beauty.

As the performance continues, the artists display an Instagram feed, and scroll through images of famous BBLs celebrities like Kim Kardashian and Iggy Azalea. The Instagram feed is projected on to the upside-down vanity mirror, which is then reflected right-way up on to the wall adjacent. The audience sees the Instagram feed play out in multiple perspectives, with the performance mirrored onto the water below. In this way, Meat Mirror plays with reflections of self, recalling the Greek myth of Narcissus, who was so obsessed with the beauty of his own reflection that he eventually fell into the image and drowned. Instagram is seen as a key influencer in decisions around plastic surgery. The power of seeing others transform can shape ideas of self. Meat Mirror explores perspectives on what is the ‘authentic’ self.

While the Instagram feed scrolls through booty pics, the character’s bum inflates, becoming larger and larger, encouraged by her followers’ attention. At the same time, images of famous butts are followed by less salubrious and then disfigured bottoms, as well as pictures of needles, knives and surgeries involved with the BBL procedure. Soon the audience will stop laughing. Beauty is conjoined here, with death. While there is humour to Meat Mirror, there is also confusion and pain. In this way, Younger and O’Neill’s work cleverly lures in the audience with comedy and aesthetics, all the while reflecting back to them the conundrum of the dissatisfied self that will tolerate pain to be another version of self.

Plastic surgery can appear harmless when it is presented by social media influencers. However, many of these treatments can cause severe health consequences, death. What’s even more troubling is that plastic surgery companies often position themselves within low socio-economic areas, siting their shop fronts near Centrelink, offering payment plans, dodgy deals and pushing consultation about certain surgeries. The artists talk about this as a form of gaslighting, where people are persuaded that something is wrong with them. The siting of this performance amongst the natural beauty of plants and fountains strikes home about the absurdity of human vanity.

Meat Mirror will tour to THE WALLS at the Gold Coast from 5–20 June.