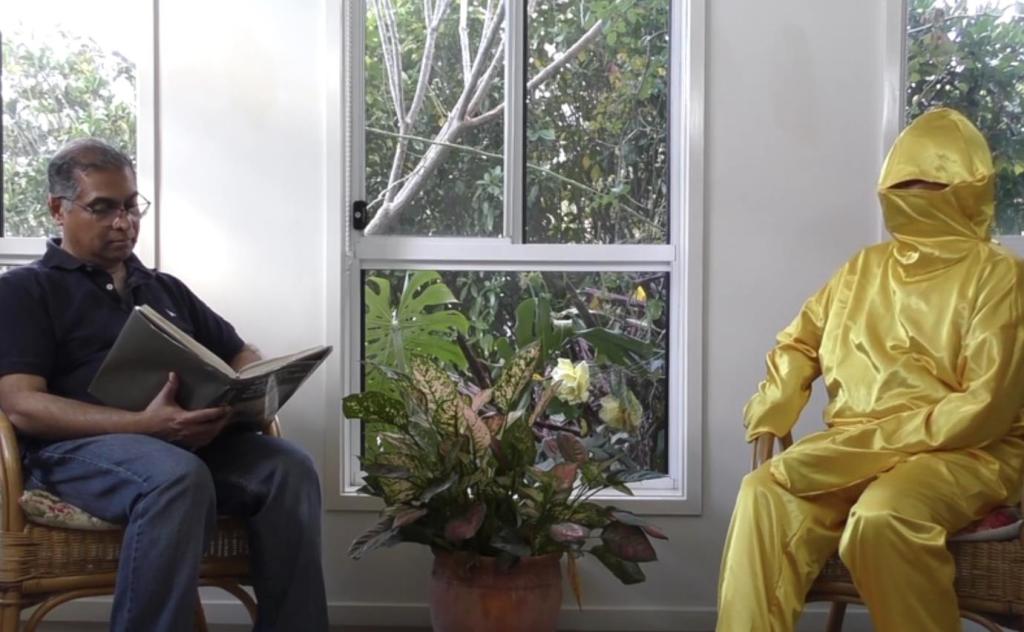 Originally intended to be a live performance before COVID-19 and its associated restrictions got in the way, inter-disciplinary artist Jagath Dheerasekara’s Break the Cinnamon Branch ended up as four short videos.

As it happens, the work, presented by the Campbelltown Arts Centre in New South Wales, might have inadvertently found its best form, as the TV interview/cooking show conceit content works so well on a more typical platform.

In four short videos, Jagath Dheerasekara offers the viewer a compressed, beguilingly accessible yet unsettling glimpse of the colonial legacy of his native Sri Lanka, a country burdened by first Portuguese then Dutch then British invasions.

Dheerasekara’s performances are part cooking demonstrations and part interviews, threaded with family memories and snippets of colonial history, which he reads out of history books he takes from his own bookshelf.

‘With simple dignity, Dheerasekara responds to the questions about who he is and what he’s cooking.’

All this is interspersed with blunt and insensitive questions from an unseen character ­– questions illustrating the casual yet culturally brutal racism that people from Sri Lanka routinely face when they come to Australia,  for example, assumptions that they’re from India, that they’re Muslim and that the language they speak is ‘Sri Lankan’. With simple dignity, Dheerasekara responds to the questions about who he is and what he’s cooking. That the word ’curry’ doesn’t appear in any of the numerous language groups of the region is a perfect metaphor for the blanket othering and unseeing of the white gaze when it comes to people from the region of the Indian sub-continent.

Each video follows the same format, revolving around Dheerasekara preparing a particular dish – Dello,
Parrippu, Mekaral, and Embulthiyal. Dheerasekara talks about the significance of each dish to his family, and to Sri Lankan society at large, making brief observations along the way: we learn how there were once thousands of rice varieties, but the world now knows very few, and that chilli was introduced to Sri Lanka by the Portuguese.

Images of Sri Lankan forests intercut the cooking scenes – we see a man in a shiny yellow alien-esque suit striding through the trees: the ghost, albeit an alive and present one who lives on in the consciousness of Sri Lankans, perhaps invisibly, perhaps not, of their country’s colonial past. He also turns up in Dheerasekara’s own home.

We learn that under Dutch rule to interfere in any way with cinnamon plants was a crime punishable by death. Hence the name of this series of performances – to break a cinnamon branch is an overt form of rebellion.

‘We learn that under Dutch rule to interfere in any way with cinnamon plants was a crime punishable by death.’

It’s warming to see Dheerasekara take such pleasure in making his favourite dishes, something he says the average Sri Lankan male is seldom permitted in his home country, as he is usually banned from the kitchen.

Break the Cinnamon Branch comprises a beguilingly simple, intimate set of performances. The format is so accessible that the information, delivered in short chunks, sinks in deeply and you remember it easily. All of the content – the activity of cooking, the anecdotes, reading historical facts, and outdoor scenes – is given the same patient, gentle delivery, more or less the same emotional intensity within the video, and is presented at the same even pace. Yet the effect is profound.

Dheerasekara has been selected as one of the artists in the upcoming Hobart Current initiative by the Tasmanian Museum and Art Gallery (TMAG) and the City of Hobart.