An effervescent concoction designed to bemuse as much as to delight.
David Barmby 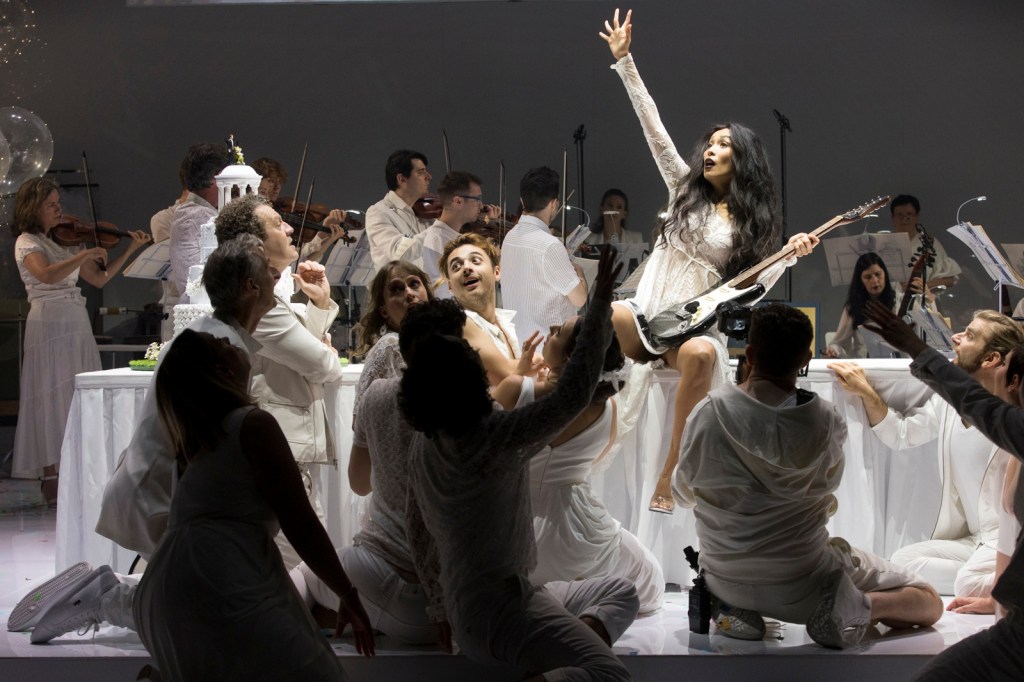 Platée, Rameau’s first attempt at comic opera, is set to a libretto by Jacques Autreau modified by Le Valois d’Orville and Sylvain Ballot de Sauvot. The work’s exotic and fanciful plot, spread broadly over a prologue and three acts, revolves around a notably plain marsh nymph residing at the foot of Mount Cithaeron (in the interests of a more vivid theatrical coup, the character is presented as an ugly frog).

Platée is cruelly deceived into thinking that through careful planning she might take the place of jealous Juno, wife of Jupiter. Her ill-conceived love is mercilessly mocked. Once Juno removes Platée’s veil at the wedding ceremony with Jupiter, she realises at once the ghastly trick her colleagues have played on her. For the briefest of moments we might feel her sadness as the gods return to their clouds while a humiliated Platée retreats to her pond, not before swearing revenge on all.

It was something of a dream come true for Erin Helyard, Artistic Director of Pinchgut Opera, to bring this elaborate production together in the company’s 20th year. Following many months of planning and five full weeks of rehearsals, the ensemble’s enthusiasm and drive was readily evident from start to finish on opening night. Certainly there was a genuine sense of camaraderie and fun shared by all on stage.

Possibly to increase the absurdity of the plot, Rameau chose to set Platée and Amour/Cupid as travesti roles, that is, taking on opposite genders. In this production by Neil Armfield, it was these two roles that excelled in breaking out of the mould. Maverick haute-contre Kanen Breen was larger than life in his transgender role. He literally towered over the cast in negotiating an extraordinary vocal range from his low chest through to stratospheric falsetto while perched throughout in powder-pink, patent-leather, over-the-knee, 20cm stiletto boots.

In ludicrous wigs, chiffon and fur outfits and outlandish makeup this burlesque was all great fun, even if exhaustingly and unrelentingly camp, often overshadowing the more subtle and tender aspects of Rameau’s exquisite score. An edge-of-seat urgency became constant. Some relief from the agony of the fixed smile would have been welcome. The exquisite incidental music seemed to get in the way, perhaps being considered too static, something to be quickly overlooked and forgotten.

Cathy-Di Zhang was extraordinary as La Folie (Madness) a male role sung by a soprano. This was her first appearance in a Pinchgut production; we hope that she returns soon. Unimaginable athleticism in voice and physical movement in Act Two while shackled to an electric guitar, standing on a wedding table and moshing into the chorus was a show stopper, even in this show full of stoppers.

Peter Coleman-Wright (Jupiter) and Cheryl Barker (Juno) contributed their distinction and artistry in more sage and dignified measure, while David Greco (Momus) and Nicholas Jones (Mercury/Thespis) both provided first-rate performances despite being dressed in tennis shorts and yet more stilettos. Cantillation and the Orchestra of the Antipodes, with its two restored pair of Baroque bassoons (incidentally, named ‘Castor’ and ‘Pollux’) were in impeccable form.

Of concern was the production’s design, furnishing the stage with a half-dozen slippery steps responsible for two – thankfully not serious – heavy falls throughout the night. With trailing bridal veils and absurdly tall stilettos, I hope no one breaks a leg for the rest of the season.

For this dream-come-true production many of us wondered if a less gratuitously vulgar interpretation might have been possible. Is the music not enough?