‘Bling’ in spades; an exhausting and non-stop binge of hyperactive excess, but loads of fun nonetheless.
David Barmby 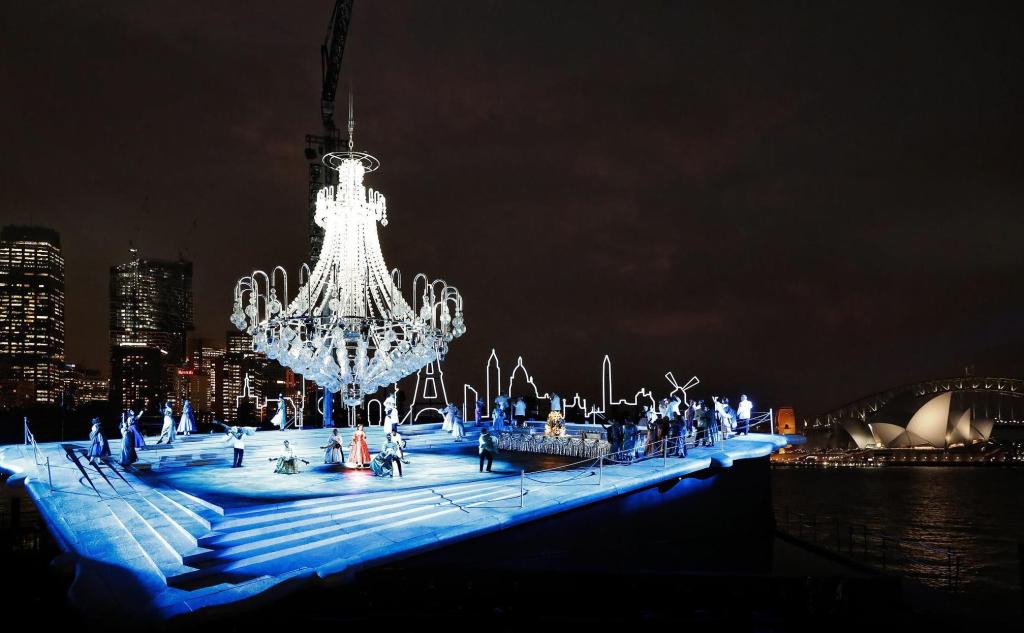 Giuseppe Verdi’s popular La traviata (‘The Fallen Woman’) with libretto by Francesco Maria Piave is based on the play La Dame aux camélias (‘The Lady with the Camellias’) itself adapted from a novel by Alexandre Dumas, fils. The main role portrays a young courtesan residing in Paris, named Violetta, briefly having the time of her life in society yet facing her certain demise or even death from a mixture of tuberculosis and abandonment.

There has been a ‘writing on the wall’ for Violetta as a ‘kept woman’ before she meets the young, handsome and virile Alfredo at one of her soirees. He presents freedom and escape from her trapped situation, though alas it seems, little to finance it.  Nonetheless, stunned by love, Violetta is bravely willing to support him and they leave for rural pleasures together.  Her deep well of support soon dries and Violetta needs to sell everything to subsidise her new remote dream home with Alfredo in the countryside. Germont (Alfredo’s father) persuades Violetta to give up her claim to love for the sake of Alfredo’s sister. Her self-sacrifice in Act II is the turning point of the plot. Violetta, however, expires of her illness (Act III). She dies. The End.

‘Since the first Handa Opera on the Harbour event in 2012 this yearly harbourside extravaganza has become a much-loved and touted ‘Sydney Experience’.’

The tale was considered structurally and morally fractured though it is now a much-loved inclusion in the standard operatic repertoire presenting a relevant debate between indulgent pleasure, love and the sacrifice of duty.  Alas, today there is also the more-than-ever resonance of the abusive treatment of susceptible women by men under their influence and authority.

Developing a hybrid of spectacle, circus, ballet and opera, where enough is apparently never nearly enough, Opera Australia’s Handa Opera on the Harbour La traviata’s opening on Friday night was, of course, not intended to provoke reflection on theatrical subtlety or musical nuance.

Since the first Handa Opera on the Harbour event in 2012 this yearly harbourside extravaganza has become a much-loved and touted ‘Sydney Experience’. For there is grandstand outdoor seating, popup bars, restaurants and kilometres of red carpet.  Amplified singers on stage and the orchestra beneath competed with the natural sounds aloft of screeching bats annoyed by this noisy and bright invasion of their homes in the nearby fig trees. Crowning all of this is a 3.5 tonne chandelier suspended from a floating crane allegedly sparkling with 10,000 crystals. It all serves to provide ‘bling’ in spades with non-stop, exhausting-to-witness colour and movement.

Francesca Zambello’s 2012 production, updating the work from Belle Époque to the cool 1950s, is here revisited by Constantine Costi, much visual charm of the period abandoned in the process. Costumes (Tess Schofield) mainly in single-coloured pastels disappointed; Violetta has to convincingly confront Alfredo’s father and thereby losing the love of her life while dressed in ‘capri pants’ and ruby flats. Brian Thompson’s neon-lit set is effectively simple, modular but utterly frigid, while John Rayment’s lighting design served to startle rather than evoke. Over two and a half hours in duration, the work seemed the longest death-scene in all opera.

The star of the show on opening night was unequivocally Stacey Alleaume (in the principal role of Violetta) who well negotiated its vocal challenges and theatrical demands, from frivolous and reckless ebullience at the start to heart-wrenching pathos by the work’s conclusion.  Her lover Alfredo (Rame Lahaj) oozed a brooding virility throughout, though had difficulty in accurately pitching his notes at the same time.

Some of the finest singing came from Michael Honeyman as Giorgio Germont, Alfredo’s father.  The dancing and choreography (Shannon Burns) was breathtakingly athletic and Brian Castles-Onion direction of Opera Australia’s Orchestra and Chorus kept the pace snappy. Further, there were ‘fun-boats’ on the harbour and, at the end of the famous Brindisi the sky lit up with fireworks. If Dykes on Bikes had roared onto the stage at this point, it would not have jarred nor surprised.

Closer to Luna Park and Mardi Gras than serious opera it was nonetheless fun to experience, but became tiresome over two hours.  Hopefully it might attract others to more deeply investigate aspects of opera and this one in particular.