This is a power-packed psychological opera squeezed into just 60-minutes, and manages to strike a contemporary #MeToo chord and questions of gender-based agency.
Gina Fairley 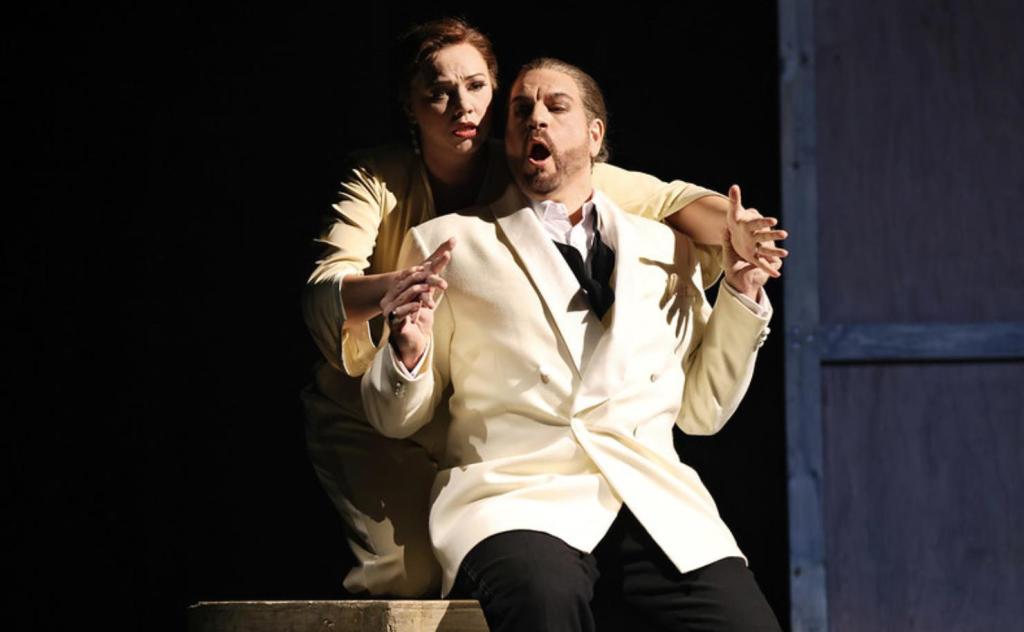 This opera is short (just 60 minutes), but oh is it dark! Taking its cue from Charles Perrault’s novel from 1697, Bluebeard, Hungarian composer Bela Bartok’s re-visioned it as Bluebeard’s Castle, an opera with just two protagonists.

First performed in 1918, it is every bit as current today in terms of misongyst narratives when considered in context of Margaret Atwood’s Handmade’s Tale and The Bloody Chamber, or Sam Taylor-Johnson’s Fifty Shades of Grey.

Rather than shy from that disconnection from reality that opera offers, Directors Andy Morton and Priscilla Jackman – directing together for the first time – have staged Bluebeard’s Castle contemporaneously, and purposefully stark. There are no foiling illusions here.

It is all the more potent a choice in the wake of the recent outings of predatory repeat offenders Harvey Weinstein and Jeffrey Epstein, among others – but I am not the first to suggest Bluebeard’s Castle is the ultimate #MeToo narrative.

‘… I am not the first to suggest Bluebeard’s Castle is the ultimate #MeToo narrative.’

The role of misogyny in opera has been on the table for discussion increasingly in recent years, questioning whether there is a place for such narratives in contemporary society.

The premise of this opera rests in the beautiful Judith, who leaves her sun-filled home, family and fiancée to join Bluebeard in his castle – better perhaps described as a dank dungeon. She has heard the rumours of his penchant for murdering his former wives, but in choosing to join Bluebeard of her own free will, there is the curious twist that she is in charge of her own agency here – hardly an angle expected of the early 20th century, when this opera was written.

The opera opens with a spoken prologue. While this is often omitted when Bluebeard’s Castle is performed – Morton and Jackman chose to include it, and further, ensured it was delivered by a woman.

Faced with seven locked doors, Judith – with an almost nagging “Karen insistence” – begs to have each opened, only led to her own demise. On the one hand, this opera offers a cautionary tale about uninvited curiosity; and on the other, it is a trope long painted in fiction – and life alike – the blinding portrait of desire for the ‘bad guy’.

Opening the first door and faced with tools of torture dripping with blood – Bluebeard’s offhand comment was, ‘well that’s just my torture chamber, Judith’, as if every bachelor had one. Torture is followed by weapons, blood-encrusted jewels and so on – Judith’s demise only escalates with each opened door.

Both Carmen Topciu and Daniel Sumegi are superb in their roles. Sumegi’s first strands resonate with such depth and darkness, his icy tone sets the energy. There is a violence in his character, and his constant catch-cry, ‘are you afraid Judith?’, is like a cat taunting a mouse.

Topciu’s performance is at times sunny in disposition, then spirals in to a vacillating emotional confusion, and eventually a kind of resignation.

Conductor Andrea Molino takes the audience through the huge range of Bartok’s emotions – significantly shifting with the opening of each door – incrementally building tension, and at time sorrow and melancholy.

Where this opera really finds its own definition, is in its stark staging. John Rayment’s lightening is incredible! There is a moment towards the end of the opera where, through light, a square doorway seemingly opens to another dimension – a kind of portal between evil and hope is superbly achieved in his hands.

‘Conductor Andrea Molino takes the audience through the huge range of Bartok’s emotions – significantly shifting with the opening of each door – incrementally building tension, and at time sorrow and melancholy.’

The set is merely populated by a flotilla of crates that are seamlessly moved around by stagehands, creating a kind of Escher-like architecture of surreal stairs and platforms. It is low cost and high impact, and in some ways is instructive that opera need not be limited by spectacular ‘over-staging’ that comes with equally spectacular budgets.

This opera is often performed in a concert version, because it is seen as rather static, but this combination of lightening and movement – and with not a door in sight – is incredibly transportive and in-sync with the tone of Bartok’s libretto.

One is not distracted by lavish sets and costumes; rather they are plunged deeper into the narrative.

To date, Bluebeard’s Castle has not been performed by Opera Australia. I am curious whether COVID had an impact on this decision, given the length of the performance (aka a shorter contact period) – and clearly its modest production budget –  plus the fact that it relies on just two performers?

My only complaint – the season is too short.