The opening concert of the QSO's 2021 season was chosen from classic orchestral favourites suggested by the audience.
Suzannah Conway 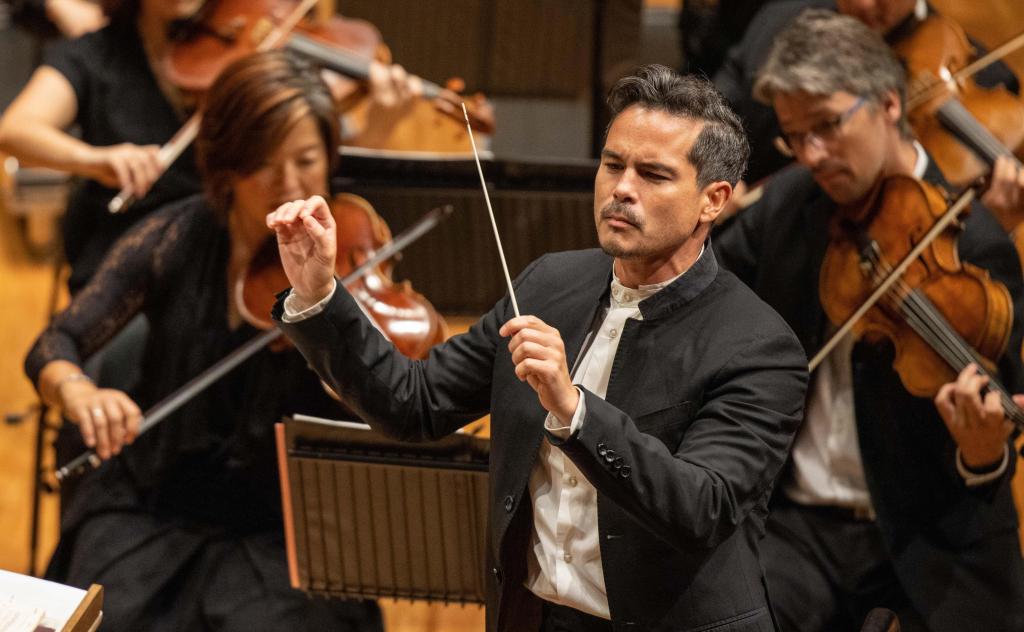 Providing an interesting mix that commenced with a Mozart overture, progressed to well-loved movements from Beethoven, Tchaikovsky and Dvorak symphonies and finally to the twentieth century with Gershwin and Ravel, Queensland Symphony Orchestra’s (QSO) season opening was a well-balanced, generally effective program that demonstrated the orchestra’s versatility and the skills of its individual players.

Under the baton of Queensland-born conductor, Dane Lam, there was an additional energy and youthfulness that married well with a revitalised QSO, who are clearly raring to be back on the stage after a difficult musical year in 2020.

Mozart ‘s overture from his opera The Marriage of Figaro is one of his most beloved pieces of music, played the world over in concert halls as a signature work. It is surprisingly short, as Mozart deleted the middle slower movement after the opening night, perhaps in compensation for the length of the opera itself. What we are left with is a glorious cacophony of sound; a fast-paced, mad-cap overture representing opera characters scurrying in all directions and heralding the opera buffa that is to come. Starting at speed with a brisk, perhaps overly fast, opening theme from strings and bassoon, Lam controlled his orchestral forces with alacrity. However, with such a well-known score, that is both complex and demanding, this rendition by Lam seemed to lack crispness and the attention to detail required to make it fresh and inviting.

‘What we are left with is a glorious cacophony of sound.’

The second movement of Beethoven’s Symphony No.7 in A, the Allegretto, is by contrast a stately, majestic and elegant work. Lam took a measured and careful approach to the solemn march of this movement with its dotted syncopation, commencing with fine work from the celli and violi. The rhythm gently and gradually gathered momentum with the addition of horns, trumpets and woodwind. Some fine melodic flute solos added an intensity to this wondrous movement, one of Beethoven’s finest and most moving compositions.

Tchaikovsky’s Symphony No.5 in E minor, movement 3, the Waltz, seemed an unusual choice in a program of ‘all favourites’ as there are many pieces by the Russian composer that one might deem more worthy than this. The movement is pleasant enough, though the second movement of this symphony would have better illustrated the emotional roller-coaster of the composer’s music and is undoubtedly one of his greatest love songs. The waltz theme was nevertheless well-executed by marvellous string and woodwind playing in particular, clearly demonstrating why Tchaikovsky was such a first-rate ballet composer.

The celebrated Largo from Dvořák’s Symphony No.9 in E minor, from the New World suite, a definite favourite with audiences, was beautifully played by the orchestra, the understated yearning expressed sensitively and with a controlled emotion under Lam’s baton. Its opening poignant theme, the melody repeated throughout, was extremely well played by Vivienne Brooke on the cor anglais, who deserves special mention for her exacting attention to detail and the sweetness of the sound. However, all the woodwind are to be commended for exceptional work alongside the tenderness of the strings and solid work by the brass.

It is difficult to listen to Gershwin’s extraordinary An American in Paris, without recalling dancer Gene Kelly as the gauche American exploring the European city. However, Dane Lam managed equally well to convey all the sights, sounds and flavour of the city in a passionate sonic rendition of this glorious work.  Demonstrating the many musical colours of their instruments, the orchestra was able to show off its many talented instrumentalists in a range of solo parts, to great aplomb.

Lam started with a lively and light-hearted approach to the City of Light, the noises of the street including the vivacious brass, the klaxon horns of the taxicabs, the intensity of flutes and oboes, and the solo violin representing the American himself.  Intrinsic to the composition, the jazz and blues themes allowed the brass to have a field day, with some terrific contributions from trumpets, trombones and tuba, underscored by the double basses, and made complete by excellent saxophones. Exciting and exhilarating, this work was a highlight of the evening.

Ravel’s wonderful Bolero was given star treatment as the final offering and is a perennial favourite.  Representing a Spanish dance that starts slowly and quietly, building to a frenzied cacophony of sound in its thirteen minutes, Lam started his Bolero with a whisper-light simple rhythm on the snare-drum, pizzicato celli and violi, and the quietest repetitive melody on the flute. A mesmerising start that built gradually and slowly as more instruments joined or took up the theme, with additional pizzicato strings that eventually started to play fiercely and ever louder. With the enormous energy of full percussion and brass, the work finally came to a riotous and full-blooded climax, to the delight of the audience.

Clearly thrilled with being back in the concert hall, a short and fun encore was also presented, which the audience relished. Brahms’ Hungarian Dance no.6 was both light and enjoyable.