Curator Deborah Hart takes a look at the lesser known artist Hugh Ramsay, a prodigy who died at just 28, but whose impact on Australian art is more deeply felt than we realised.
Gina Fairley 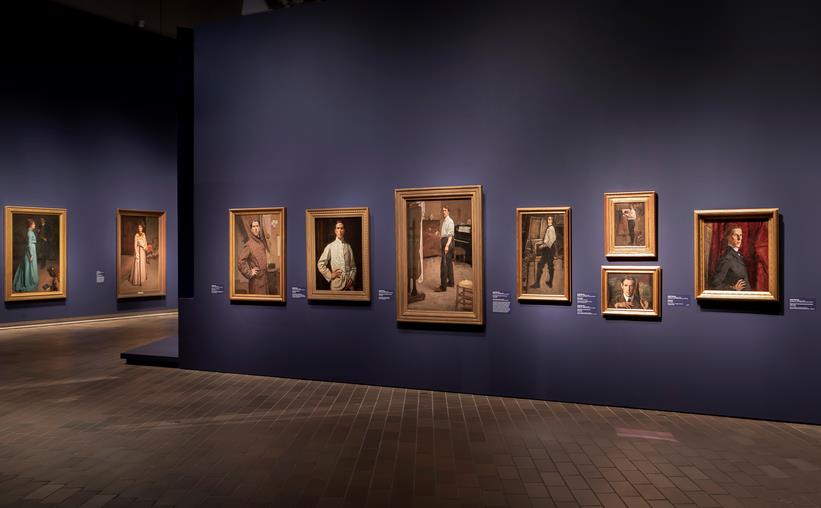 Hugh Ramsay was just 28 when his career was cut short. In Australia, we have a well-articulated passion for celebrating our early career artists, but was that the case at the time of Ramsay’s death in 1906?

National Gallery of Australia’s Head of Australian Art, Deborah Hart, suggests not. Her exhibition, Hugh Ramsay, offers a rare chance to see the depth of his artistic achievement through more than 85 works. It also puts a historical anchor on that passion for painting and talent that comes with the young, but is not exclusive to our times.

She told ArtsHub: ‘I wanted to give people something that is a new discovery – a talent in Australia not known before – not just that “wow he was 28”, but that the works themselves are so compelling.’

She added: ‘There is this temptation to ask, “What would he have done afterwards?” But to me, it is really important to show what he did.’

At 14, Ramsay painted his first painting, Kookaburra (1891). He signs and dates it as he really wants to be an artist. By 16, he was attending art school. And by 25, he was making an international reputation.

He had four works selected for a new Salon exhibition at the Grand Palais in Paris in 1902. Three of the paintings are on show in the retrospective at NGA, while the fourth work has never been found. He was the only Australian artist to claim such a success. Hart added: ‘[Rupert] Bunny only had one, and he had four.’

So why is Hugh Ramsay not a household name like Bunny, George Lambert, Tom Roberts and Arthur Streeton?  To address that, Hart has curated the most comprehensive retrospective of Ramsay’s work in 25 years – essentially a generation – which recently opened at the NGA.

Among the first works that viewers are introduced to is a set of pencil drawings and a collection of seven nudes he made at art school. They feel quiet contemporary. In one, Seated girl (c1897), a woman has her back turned to the viewer; her hair is parted revealing her back. They are not the traditional poses you would expect of the day.

Ramsay has long been described as a ‘painter’s painter’, and it is not surprising walking around this exhibition.

His drawings capture a sensitivity and uncanny connection with the sitter in what would come to be a signature for Ramsay. This is extended in the most beautiful selection of artist books and studies gifted by the Ramsay family, and presented in a vitrine in that first gallery, and on another wall, the secondary pillar of Ramsay’s career is introduced – portraits of his sisters Madge and Jessie, who along with another sister, Nell, continued to be muses throughout his career.

As viewers move through the space, they travel with Ramsay to Paris, where he lives less with the bohemian joie de vivre we associate with artists living in Montparnasse, but rather a kind of earthy raw studio practice that was about human relationships, dosed with a level of resilience and drive for making on so little.

This is reason why his Ramsay’s art has appealed to so many artists across generations – that silent connection across time – for that understanding of what an artist’s studio practice really is. We get a window into that with Portrait of the artist standing before easel (1901), marched out with a suite of self-portraits made abroad.

Hart said of this work: ‘He wants no distraction. We can see it in his eyes and his pose.’ Adding, ‘The thing he always does is pares it back; it is really focussed and that is something that is beautiful about his work.’

Journeying their length in the exhibition, the audience can see how Ramsay is experimenting. They can see that he is looking at the greats – at Diego Velázquez, at Sargent Singer, at James McNeill Whistler and at George Lambert – but in that, we are witness to him finding his own version of these classic genres.

This is emphasised through the inclusion of a small collection of works by Lambert, paying recognition to his influence on Ramsay.

There is an almost cultish passion for portraiture in Australia, evidenced by the number of portrait prizes, and insanely large crowds that attend them. This exhibition will appeal to that audience, but at the same time, it’s less a rolling out of celebrity and more a persistent conversation with form, with light, and with gesture that defines his canvases through figuration.

The thing that is most striking, when viewing this exhibition, is Ramsay’s ability to capture the spirit of his sitter. It is not just a likeness; it is not just a sense of who they are – these portraits are so much more. For example in Jessie with doll (1897), Ramsay captures his sister’s incredible quizzical, emphatic, strong stare back to the onlooker. It is palpable.

It was a real precursor of what was to come, especially if we are to jump forward to his portrait Miss Nellie Patterson (1903), commissioned by Dame Nellie Melba of her niece. While she sits in a formal pose, there is such energy and lightness in the abstracted brushstroke and veiling of paint in her dress.

Hart has paired it with a portrait of his concierge’s daughter, Jeanne (1901), connecting Paris and Melbourne. ‘I have wanted to get these works together for about 20 years. I do believe these are among the best child portraits in Australian art,’ Hart said.

The girl in white was there right from the beginning, and again is the theme of what Hart describes it as Ramsay’s ‘greatest work’ at the end of the show. In 1904’s Two girls in white (also known as The sisters) from the Art Gallery of New South Wales, we see that same intimate connection and proximity, noting its clear homage to Whistler.

But while it reads as your typical Victorian era narrative, Ramsay makes it personal and brings it into his own world, overlaying it with truth. You can almost feel the imminent loss in his sisters, who are aware of Ramsay’s illness.

Ramsay’s health started to fail during that time in Paris, and he was diagnosed with tuberculosis. He returned to Australia at the turn of the century, but not to be defeated by his illness, he painted the largest work of his entire career, An equestrian portrait (1904).

I wouldn’t describe it as Ramsay’s best painting, but it embraced that determination to pursue his painting to the best of his ability and push every avenue until his days were snuffed.

While the majority of Ramsay’s paintings here could be perceived as just beautiful portraits of a certain style, time and class, there is an incredible capacity for Ramsay to push his own understanding of painting within that traditional genre.

Towards the end of his career we start to see freeness in his canvases, wanting to punch beyond his times. It is our loss indeed that we never learnt the course it might have taken in our history of Australian art.

This is a beautiful show. Hart has spent two years working on it, describing to ArtsHub the joy of research, and finding the narratives that shaped what these paintings have become.

I think this exhibition will undoubtedly please audiences. It will extend and broaden a chapter of Australian art history that many of us know little of, and it will offer surprises that are enduring.

Hart quotes the Go-Between’s Robert Forster: ‘[Ramsay] was of his time, but he was not trapped in time.’