This multi-layered show offers a series of interesting experimentations but leaves the audience with questions unanswered.
Jo Pickup 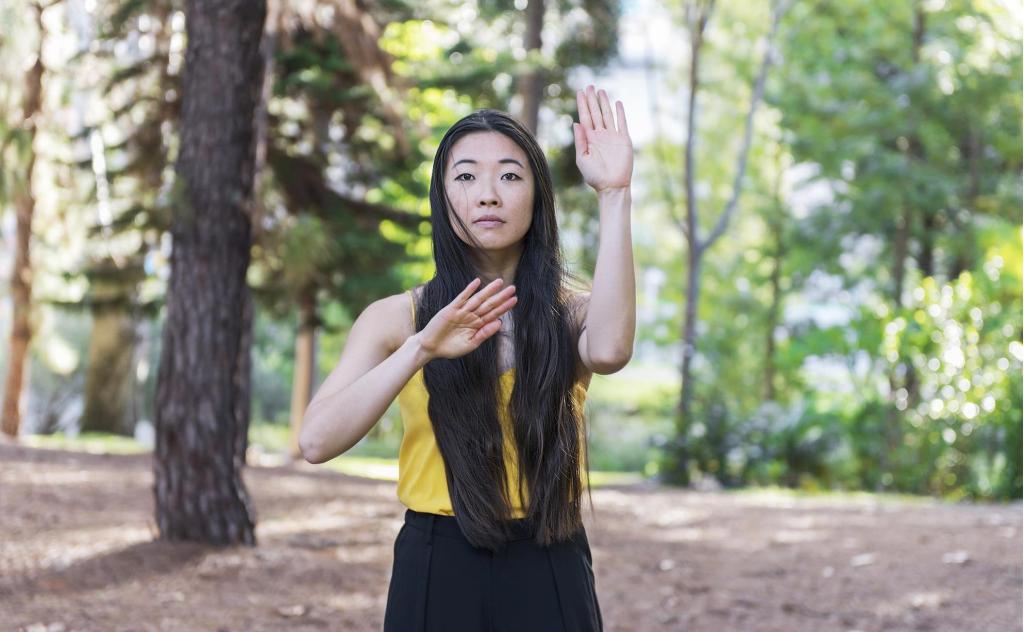 歸屬 Gui Shu (Belong) is a multi-disciplinary show that is the result of a series of artist residencies and exchanges between artists from Australia (predominantly from Perth) and Taiwan (Taipei) over the past four years.

Led by Perth-based Sally Richardson, director of Steamworks Arts, and facilitated by co-producers Performing Lines and PICA, these exchanges have allowed four female performers (two from each country), to collaborate and explore ideas of what it means to belong. Musicians, media artist and designers have also played key roles in creating this multi-layered 50-minute sensory installation of sound, light and movement.

The work’s multiple visual layers seem central to the work. Five enormous pieces of soft, semi-transparent silk-like fabric are draped from ceiling to floor and are frequently used as projection screens for moving imagery throughout the work. From rushing images of an Asian metropolis (presumably Taipei) to meditative scenes of slow-moving rain-droplets and other natural phenomena, these delicate silks are often moved about by the four performers offering many different views of their interplays of light and shadow.

We sit in near-darkness and we watch these screens and stage-space become intermittently flooded or dappled with the colours of these illuminations. A rather brooding, sorrowful score plays in the background. These sounds are a mix of electronic sound by Yenting Hsu and live cello by Tristen Parr.

As the four female performers (Laura Boynes, Yulin Kong, Yiching Liao and Hsiao-Tzu Tien) inhabit the small space – stretching and lunging through the draped fabric – they too emit sorrowful tones. Their moves are laden with tension and sometimes they carry a stone with them (in their hands, on their feet, on their backs), hinting at being weighed down and burdened.

Soon the piece gives way to a more fiery scene where the dancers’ movement speeds up and is more forceful. This short, frenzied scene is awash with red and yellow lights, taking the mood from darkness to a firestorm setting. The women are raging together through thrusts and dives… but admittedly, it’s unclear why.

And this is the biggest question to linger in mind throughout the work. These beautiful women are clearly suffering through different states of being (and artfully so), but why? What burdens are they carrying? And then, later on, what are they raging against?

Then a lively, pop-infused interlude occurs towards the end where the women share fun memories of the styles of music that work best for them for singing out loud to themselves (think karaoke in front of the mirror). This brings a range of more pastel lighting states to the stage as the women let it all out and the lights wash over them.

But again, one is left asking – why?

Perhaps these directorial choices are part of the team’s wish to evoke the complex layers of experience and emotion that underpin one’s sense of belonging. Perhaps these are visualisations of our continually altering states of belonging and its opposite. As our daily lives ebb and flow, we can feel like insiders in one moment and foreigners the next, and we all have layers memory and stories we tell ourselves to define our place in it all.

The exquisite moves of 歸屬 Gui Shu (Belong)’s four performers under the ever-changing interplays of light and colours are at times a marvel to watch. However, for the most part, the work’s multi-layered, multi-dimensional qualities do not ever seem to fuse into a greater, cohesive whole.

Consequently, at this stage in its development, this work is one to enjoy as a series of visual and sensory experimentations whose wide-ranging abstract qualities inform the journey.