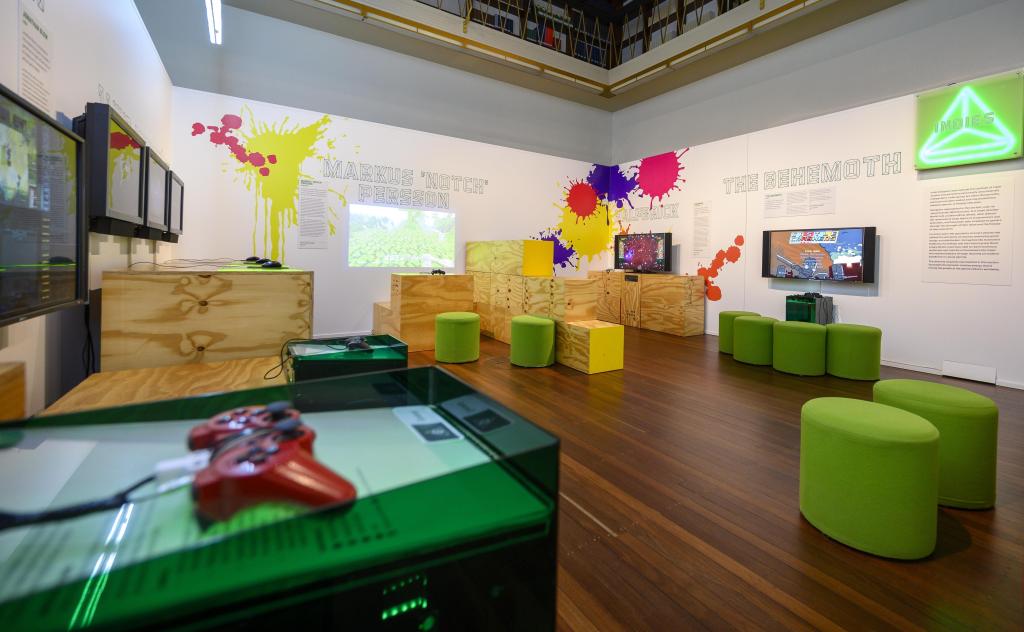 The Game Masters exhibition comes to NFSA from ACMI in Melbourne, where it was first exhibited in 2012. Photo Irene Dowdy, courtesy NFSA.

The significance of video games goes beyond the millions of people who play them and the many of hours of entertainment they provide. The Game Masters exhibition at Canberra’s National Film and Sound Archive provides a rare opportunity to see games as a complex artform, and reflect on their wider role in popular culture and the world. Best of all, you can play the games.

The exhibition is in three parts: Arcade Heroes, Game Changers, and Indie Games. These three categories give visitors an insight into the massive gaming industry, the development process, the creative directions in which creators have taken games, and guides us on a nostalgic tour of old favourites.

The arcade games – including titles like Pacman, Asteroids, and Space Invaders – are set up to play in their original forms, complete with joysticks, iconic sounds and imagery, plastic buttons, and CRT monitors. The exhibition then segues into hugely influential controller games including franchises like The Sims, Sim City, Streets of Rage, Warcraft, Rock Band, Dance Central, Lego, and Starcraft.

It’s at this point that the complexity of games and their interplay with art and the world comes into fore. Take Sonic the Hedgehog, for example. The game was developed out of a unique economic situation where its company, Sega, was deep in competition with Nintendo for market dominance. Its 16-bit graphics seem like limited technology by today’s standards, but enabled unique character designs and movements that the more simplistic arcade games couldn’t have achieved. The design of Sonic is inspired by Japanese anime, putting art and cultural history within the gameplay. And the unique way Sonic uses speed and momentum to complete levels and combat enemies integrates real-world physics with fast-paced action. These games are complex, arising from specific moments in history, and made new artistic and technological contributions.

The indie games included in the exhibition open up the possibilities of games beyond the commercial realm, exploring art, politics, problem-solving, and technological functionality while also providing engaging playtime. These games often had a more whimsical feel to them, as though you’re exploring an idea or embarking on an experiment. They give an expansive view of what games can be beyond pointing and shooting, levelling-up, and escaping enemies.

Game Masters prominently displays the names of creators throughout the exhibition, emphasising the point that these are names we often don’t know. We do remember the names of our favourite artists, authors, musicians, and directors, yet games developers enjoy much less notoriety. It’s an odd paradox because video games are very popular, and are on par artistically with the rest of pop culture as a form that integrates technology, sound, graphics, design, and story. It’s a rare move for museums and galleries to even acknowledge this.

It’s also rare for exhibitions to be so interactive. It’s unusual to even be allowed to touch pieces, let alone to immerse yourself in them so fully. Several studies show that people spend, on average, under 30 seconds looking at gallery paintings, yet even the worst gamers would likely last longer than that before ending up on the ‘Game Over’ screen. Game Masters makes an engaging change from the more standard ‘high art’ fare, while also demonstrating that games should have space in our cultural institutions. So, head to the National Film and Sound Archives, clear a few hours in your day so you have a chance to play through the exhibition, and take a friend as your player two.