Complex and incredibly beautiful, Farm tells its story without flinching.
Zoe Barron
[This is archived content and may not display in the originally intended format.] 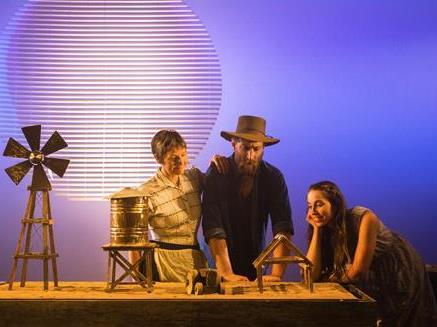 Spare Parts Puppet Theatre has a penchant for making work that appeals across generations – tackling subject matter that challenges kids and takes them seriously as insightful small humans, while making their parents think and feel too. Farm is a brilliant example of this. Complex and incredibly beautiful, it’s a show that tells its story without flinching, exploring the family-wrenching desolation of farming, the stubborn determination, and the small moments of joy.

Farm has been a long time in the making. Lead actor Chole Flockart’s family has farmed in the small Wheatbelt town of Merridin for a century, and two or so years ago she suggested a collaboration. This lead to a sponsorship deal from a wind farm, two immersive residencies in the farming town for the creative team, a collaboration with local schools in the region, and a show that uses puppetry, dance and movement to tell a very rich story.

Central to the story is a family – mother (Rebecca Bradley), father (St John Cowcher), daughter (Chloe Flockart), and grandfather (Voiced by Humphrey Bower) – who also stand to represent generations of farmers from colonial times to present. The other character is Nature, or the natural landscape and all its elements, played by dancer Ruth Battle. She controls the sun and interacts with the trees. A largely vengeful and mischievous character, she’s the escaping sheep in the shearing shed, the smidgen of rain that falls in the wrong place, the rising salinity of over-farmed land, the kangaroos that eat the crops, and the bushfire that razes everything. In many ways, the show represents a battle between the farmers – who interrupt the balance of the land by clearing the trees and shooting the ‘big bloody pest’ kangaroos – and the unpredictable, harsh Australian landscape. In one scene, the father dishes out gold coins to his wife and daughter who gleefully pour them into the sandy soil, until there’s nothing left, and the family falls apart.

As depressing as the show sounds from this description – it’s not. It’s just real. There is a rich beauty to the execution, with visual metaphors doing much of the talking and some extremely inventive puppetry. Matt McVeigh’s dynamic set – consisting mostly of a collection of wheeled crates upon which sit the sandy soil, the farm stead and the (very) occasional tree – is almost a sixth character. You can sense the layering of stories in the script, suggesting that the engagement with the Merriden community is at the very heart of this work, and the central family speaks for many. The show has its occasional naff moments, and Lee Buddle’s otherwise illustrative soundtrack sometimes dips into Age of Empires territory, but these complaints are so minor as to become unnoticeable.

Though ostensibly simple, there is a subterranean complexity to Farm, bound together with a consistency and grace that speaks of great direction, great writing, and great collaboration. It’s a wonderful piece of theatre and one well worth taking your kids, partner, grandmother or best mate to. I don’t see how they won’t enjoy it.