Celebrating the flaws in real life lived, one feels equally a voyeur and a participant in William Yang's narratives.
Gina Fairley 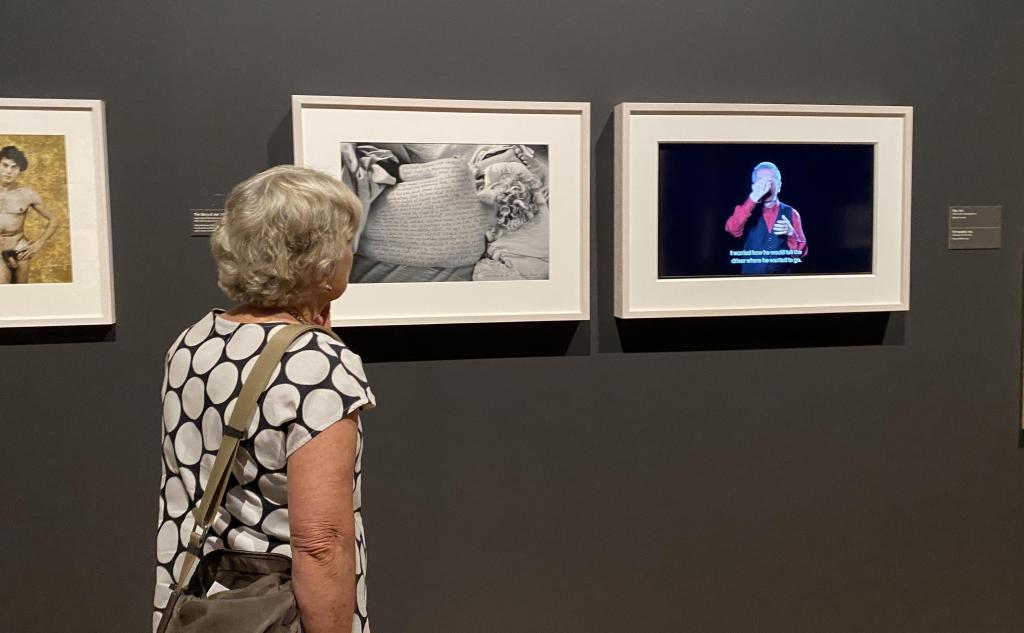 Photography is about capturing a moment; it’s a vehicle for storytelling. That is no better demonstrated than in the work of Queensland-born artist, William Yang.

A new exhibition, Seeing and Being Seen at the Queensland Art Gallery (QAG), draws together over 250 of his images spanning five decades. It is the first major survey of his work to be presented by a state gallery – but Yang insists he prefer to think of it as a retrospective (a term usually used posthumously).

His exhibition, however, is very much alive.

On the one hand, there is a sense of voyeurism on the part of the viewer, peering into the deepest hallows of Yang’s emotional reckoning, his family tensions, conflicted identity, racism and sexuality. There is an incredible frankness bared in plain sight.

And yet, in doing that, there is a vulnerability and intimacy that is also relatable and recognisable in our own stories as viewers.

Curator Rosie Hays says: ‘There is confession and courage in William’s storytelling. His most well-known works are often deeply personal and represent the means by which he reckons with his past, his relationships, and his experience outside the mainstream.’

The exhibition’s design helps to corral those conversations, and encourages a very personal engagement by the viewer. Black angled blade walls cut across and through the gallery space, tightening our viewing, and forcing an intensity with the work. They are edged with gold, offering a zip of colour and bling – a celebration at their core.

The show is presented in series, or mapped narratives. Yang’s childhood, his relationship with his mother, his uncle’s murder, his friendship with author Patrick White, and friends living with AIDS. These images are typically printed in black and white and are presented more formally in their arrangement. For example, the images of his mother march in an orderly fashion across a strongly angled wall, shepherding or honing the intensity of that story.

In contrast, other series of works break out of the mould, and burst with colour across organic salon hangs. This is where Yang maps other relationships – the Sydney gay community and Mardi Gras, his brush with fame, and friendships with celebrities and other artists, and celebrating the flaws in ‘real’ lives lived.

‘I was attracted to the so-called glamorous world and aspired to be a fashion photographer but I was terrible at it – I couldn’t cover up the flaws.’

Small videos perforate these salon hangs at moments, offering a natural extension to the role of storytelling. Where this works best is for the portrait of Joe, a hearing-impaired friend. Characteristically scribed with Yang’s words atop the image, he always felt it wasn’t complete as a portrait, and so for this hanging added a small video of himself signing the text, to create a diptych (pictured top).

Overall, this is an exhibition that welcomes time – time to read the texts over each image, to dwell in nostalgia or voyeurism. But at the same time, it is not a demanding exhibition. One can view it very comfortably digging deep or skimming with sheer pleasure.

There is a sense of the familiar despite often ‘hard’ subjects. I think this is because of the incredible empathy and humanity that Yang captures through his lens. It is an exhibition that is right for our times, when human contact has been rethought, life is celebrated, and death is honoured as we live in a pandemic. (Within days of opening Brisbane went into a further snap lockdown).

Conversations of diversity, racism and gender have also entered a new age of protocol and acceptance since many of these images were shot, and Yang’s exhibition offers an important point of reference – and indeed escalated thinking.

Talking about the exhibition, Yang said he felt his ‘ethnicity had been suppressed’, bought up in the ‘Western way’, where his mother thought ‘being Chinese was a liability’.

Aptly, this framing is the starting point for viewing this exhibition. One walks into two rather formal suites of work that shaped Yang – the images of his childhood and the murder of his uncle. There is an underlying message that no matter how far we run or mask who we are, those foundations are always with us.

A hand-scrawled didactic text sits high on the wall. It reads: ‘You see things differently 20 years on; I could almost say that a photograph isn’t any good until it’s 20 years old.’

It was reiterated in a new performance premiered over the opening weekend, In Search of Home, arguable self-indulgent. Yang has often described himself as a ‘born again Chinese’ or as ‘coming out as Chinese’ (which happened long after he came out as a Gay man). Was that the harder subject or acceptance?

Moving into the body of this exhibition, the navigational paths are somewhat unclear – but then so is life – it all seemingly folds in on itself as our adult lives are informed.

What is interesting is the end point of this show. It is the first institutional celebration of Yang’s landscapes, which largely continue the tropes of portrait in a metaphorical sense and embrace the Australian tradition of ‘body in the landscape’.

Yang also reiterated in his new performance work, the role landscape has played as a constant. It is interesting when you think of curatorial agendas. Yang’s celebrities, gay portraits, or Chinese coming out have undoubtedly been popular, but they have also served an institutional message at various points along that 50-year journey. The landscapes, less so.

Speaking with Yang in the lead up to this exhibition, he said it was at his insistence that they were included. Just as much as growing up as Chinese-Australian and gay, Yang also grew up in far north Queensland – a landscape that left an indelible impression – and he returned often to a community in Maleny (QLD) as a kind of elixir.

You get the sense that this survey finally completes Yang.

William Yang: Seeing and Being Seen