A four-part group exhibition that considers what it means to be shaped by the internet.
Megan Koch 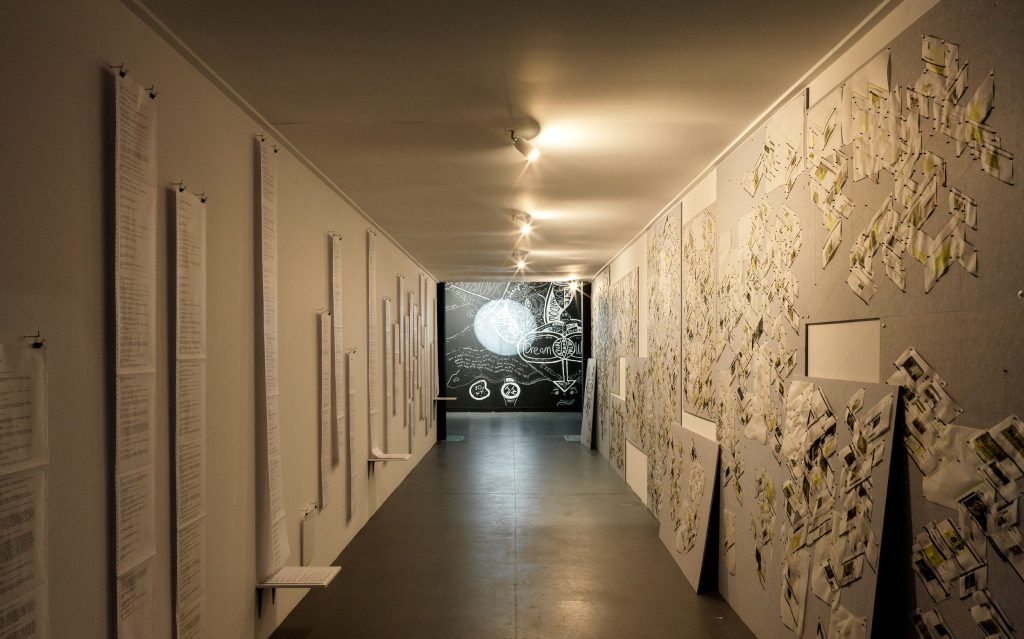 Developed in response to a news cycle filled with stories of the lofty ambitions of tech giants, the rise in internet-fuelled hate crimes, and the ever-growing encroachment of the virtual world into our daily lives, ACE Open’s new exhibition, Metaverse, takes a rather dystopian view of our relationship to the internet. The four large-scale works that fill the gallery space present us with uncanny visions of a sci-fi future, while also expressing a yearning to reclaim something more tangible, more human.

Britt d’Argaville’s installation, the chords are kissing, stretches across the first room. At first glance this column of cables seems to have burst from the white wall in a muscular, writhing show of power. Up close, however, one realises that most of these chords, tangled up and clogged with sticky PVC, are now obsolete in our wireless digital age. They appear more vulnerable: exposed and outdated.

In the next room, the scrawled text and diagrams of Giselle Stanborough’s Labyrinthitis wrap around the dark walls, nonsensical yet somehow familiar, evoking the feeling of having fallen down an internet spiral as one follows the swirls and scribbles. Spotlights roam the space – a reminder of an older form of surveillance. The work’s title refers to a real-life medical condition that causes disorientation and dizziness: a fitting description of the internet’s impact too, perhaps.

An illuminated tunnel in the centre of this shadowy room houses Roy Ananda’s Electronic void illusion, an installation specially commissioned for Metaverse. For this piece, Ananda completed one thousand online personality quizzes, ranging from ‘clickbait to earnest fan-created content, to quasi-scientific psychometric testing’. The results of these are printed on reams of old perforated printer paper (a nod to how rapidly new technologies become nostalgic). It quickly becomes apparent that there is nothing coherent to be deciphered from these thousand internet-mediated attempts at self-knowledge. They seem rather to splinter and obfuscate the quiz-taker’s personality.

Passing through Electronic void illusion, one is channelled into a viewing room where German filmmaker Harun Farocki’s film-essay series Parallel I-IV (2012-2014) is on display. In this four-part work, Farocki looks at computer animation in videogames, exploring the player’s relationship to other figures, the ‘natural’ environment, and the limits and borders of these animated worlds, as well as charting the growing complexity and realism made possible by developments in animation technology. This is a thought-provoking opportunity to experience an international artist’s final work (Farocki passed away in 2014).

Our ambivalent relationship with the internet is certainly a popular topic at the moment, but Metaverse manages to offer a refreshing take on the subject. There is something satisfying about an exhibition that focuses on just four nuanced pieces and showcases them thoughtfully by utilising the gallery space in a way that complements their theme. The large-scale, concrete tangibility of the whole exhibition is a fitting antidote to the impalpable nature of the online world. In this way, despite all its warnings of peril and fractured humanity, it is strangely reassuring.