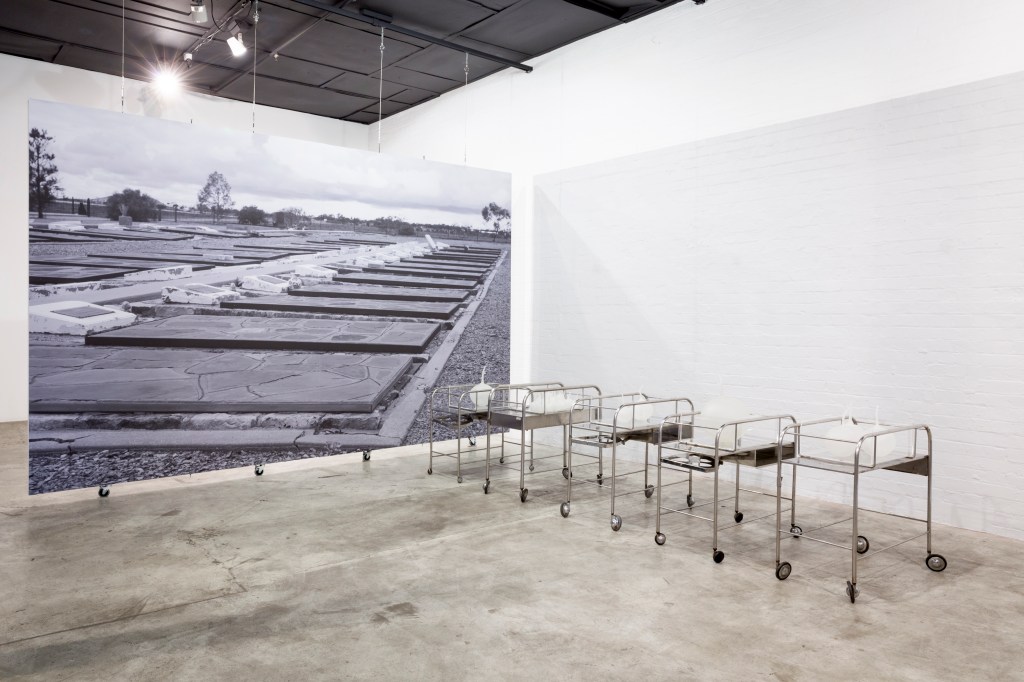 Looking Glass is Judy Watson’s and Yhonnie Scarce’s joint exhibition. A Waanyi woman from north-west Queensland, and a Kokatha and Nukunu descendant from Woomera, South Australia, the artists celebrate through their practice, Indigenous identity, history and organic connection to the Country.

At the entrance to the gallery, I am greeted by Watson’s resistance pins (2020). It depicts five out-scaled, translucent pins superimposed on a spectral background of colours and shades of blue. Of wide format, unprimed, unstretched, the canvas manipulates relational aesthetic. It shrinks the body of the viewer and disrupts their scholarly learned seeing.

Characteristic of Watson’s processes, the fabric is wrinkled and stained. Recursive and elliptical, the dyeing guides to incursions into an erased Indigenous past. Hidden images, maps and itineraries, borders, intermezzos or relays, softly reveal themselves only to morph into each other. I journey, pause, resume, divert and zigzag across the painting in a continuous act of non-structured enquiry.

Uncompleted and unlimited by the conventions of frames, Watson’s canvases hung freely on the gallery walls. Simply fastened at the upper ends, they poignantly forge an experience of instability and precariousness, softness and fragility, but also of change, transformation and possibility.

They acquire agency, assume their spatial dimensions, and respond to the conditions of display. Their vivid, lived sense of tangibility and sensation brings to the fore the metaphor of canvas as skin.

It is as skin that Watson ultimately approaches her paintings. She touches, grips, grasps, holds, stretches, clutches or squashes and squeezes the cloth, splashing pigments and water, rubbing them and forcing their trace into the material.

Sometimes, Watson lays the canvas on the studio floor, brushing, spreading, pulling or pressing indigo and ultramarine blues against the woven fibers with her own feet. Bearing the imprint of the artist’s body, the paintings become cultural objects.

As I wander through the gallery space, I observe how themes of Indigenous history are synergically reiterated, reimagined and rearticulated in the context of artists’ distinct mediums and styles.

With Scarce’s creative use of glass, explorations of Indigenous resistance are located at the level of the material. Glass is brittle – liable to shatter into pieces easily, yet strong, it cannot be simply destroyed. Its qualities eloquently sustain the forgotten narratives of Aboriginal survival that Scarce unravels through her sculptures.

Australia colonialist past and the ravenous exploitation of the Country come to the fore in a number of Scarce’s installations. Hollowing Earth (2016-17) examines the mining of Uranium on Indigenous land and its devasting consequences. It consists of blown and hot formed Uranium glass objects shaped as bush bananas or bodily organs. With tinges of brown or irregular creases and grooves, some of them suggest deformity and illness.

It is a form of mutuality between man and land that Scarce acutely demonstrates in this work. Flesh of the body and flesh of the harvest are continuous with each other in a mode of inherent relatedness. ‘Uranium glass has been used in this work to represent the sickness that this material inflicts on those who have been in contact with,’ points out Scarce, ‘each bush banana form identifies the desecration of the Country.’

In Fallout Babies (2016), Only a mother could love them (2016), or Nucleus (2020), Scarce investigates the impact of the British nuclear bomb testing in Maralinga, South Australia, between 1956 and 1963, on Indigenous people, especially children.

Fallout Babies presents a series of blown white glass sculptures. Of different sizes, they are placed on found neonatal hospital cribs, in small groups or individually. Adopting the form of bush plums, they are frail and luminous. Photographic documentation of infants’ graves at Woomera Cemetery complements the installation.

The relational identity between babies and bush plums is also captured by the artist in Only a mother could love them. However, the hand blown glass sculptures are now blackened to signify deformity or the missing body parts of Maralinga children.

Highly poetic, the title conjures motherhood as locus in which the crippled body is nor pitied or foresaken, but loved without condition. It is an underlying vulnerability of the work that aligns feeling with knowledge, drawing me towards it.

Scarce’s installations unveil the deep spiritual, emotional and physical trauma caused by the white exploitation of the land. Whereas testing might have ceased, its effects are carried in the sickened bodies and the sickened soil, and passed on to the next generation. The refractive properties of glass further solicit the viewer to look through it and see what lies beyond surfaces.

As I contemplate Scarce’s works, I sense that seeking knowledge of Australian colonialisation history, horrendous crimes against the Aborigines and the Country, and their consequences to the present day, is our unassumed responsibility.

Through the layering of narratives and chronologies, Watson and Scarce construct archives of collective memory. Their artistic gestures are ‘acts of transfer’ that provide us access to an Indigenous lost past.

Looking Glass will be exhibited until 19 June 2022

Crisia Constantine is an arts facilitator and doctoral researcher at the Queensland College of Art, Brisbane. She writes on visual arts, film and contemporary culture tricks.