A display of spherical sculptures that are an evocative meld of nature and hand-made.
Pamela See 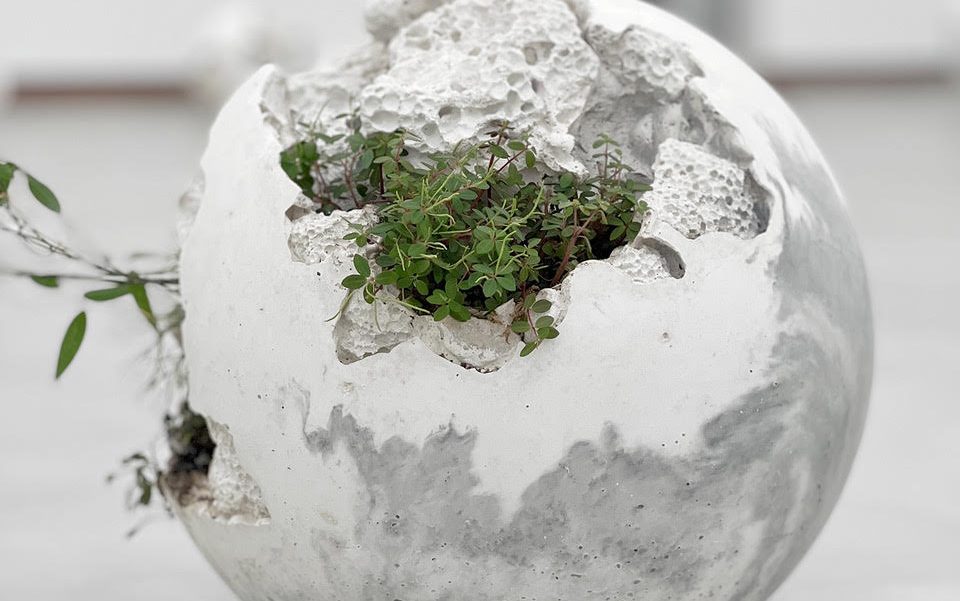 ‘The sculptures emphasise the interplay between the constructed and the natural, with the viewers themselves adding another organic element to the environment.’ Photo supplied.

After a six-year absence from the Brisbane contemporary art scene, Ryan and Danielle Renshaw have just recently opened Jamie North’s exhibition Falsework in their new eponymously named gallery, The Renshaws. To make a biblical reference, the exhibition explores ‘from dust to dust’. As a euphemism for death, it is the life in between, and arguably afterwards, that matters.

Cast in a composite that includes cement, perlite (expanded volcanic glass) and marble dust (calcium carbonate), the stunning series of sculptures appear as minimalist forms suspended in states of deterioration. The forms are also vessels, with the cracks cradling native Australian flora. In Lone Arch No.1, a vine embellishes the geometry of the composition with the elegance of embroidery. Emerging from a cavity within a sphere, the areas of its attachment to an adjacent arch appear eroded as though to suggest a ceding of construction to nature.

Many of the moulds for the spheres were light fittings, with the capriciousness of the casting process playing a role in shaping the sculptures. Some surfaces were polished to accentuate the neoclassic aspects of both the materials and forms. Within the latter, North embedded meta-forms moulded from blast furnace slag slabs, a by-product from iron and steel fabrication, unadulterated by the grinding that ordinarily processes it into cement.

This staging in production introduces a curious narrative element to his investigations into materiality. It also adds visual complexity and enticing tactility. The spheres command the space of the two rooms, with visitors warning each other to be careful navigating around them. The sculptures emphasise the interplay between the constructed and the natural, with the viewers themselves adding another organic element to the environment.

In the absence of organic matter, it is the evidence of erosion that breathes life into a series of La Nina Paintings. North engaged a process of weathering to create the patterns, exposing clay to the sun and rain during the 2021-2022 summer, prior to moulding and casting the natural forms. In the absence of colour, tones become discernible in the shadows cast by the undulating surfaces of the panels. They appear like tactile extensions of the white wall, entropic cracks that enable life to permeate.

Falsework is filled with fascinating dichotomies, readable in a diversity of cultural contexts, from the Japanese principle of wabi-sabi (beauty in imperfection) to the Chinese wu wei (effortless action). The forms were designed with sympathy to the distinct geometry of the gallery, making the spaces seductive to inhabit. The materiality of calcium carbonate, crafted into crumbling objects, cuts to the bone. The sentiments of fragility and indomitability of nature may be especially affecting in the wake of the 2022 floods in South-East Queensland.