A trip through memory and a time long gone.
Vicki Renner 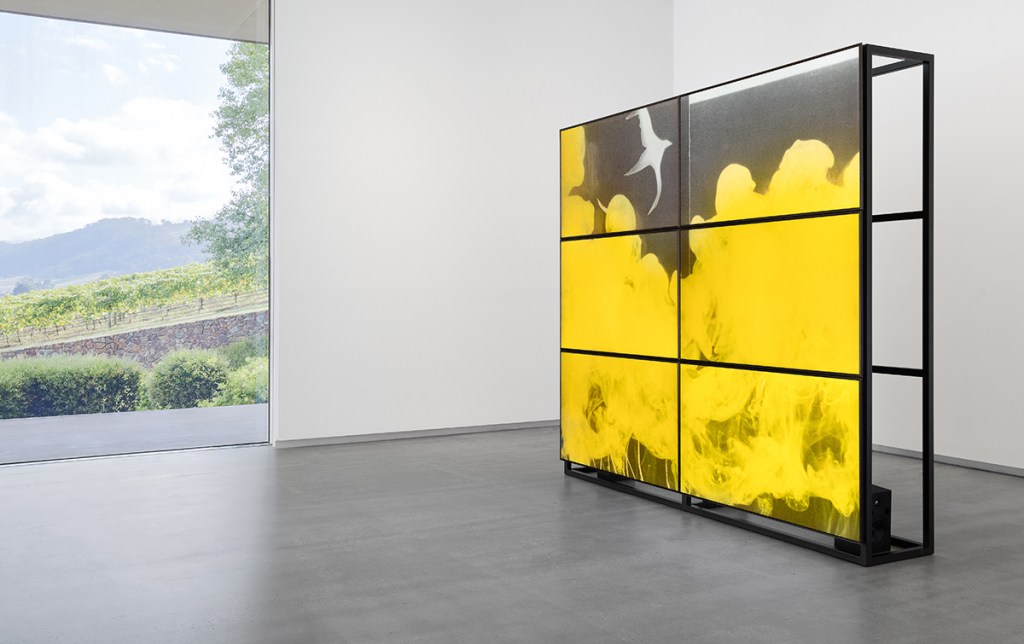 Themes of lost childhood, the masks we wear, and the impermanence of life and memory are threaded through David Noonan’s exhibition Only when it’s cloudless, which brings together artwork from private collections and various galleries for the first time. In TarraWarra Museum of Art, each space evokes a different emotion, welcoming you into a different aesthetic as you wind your way through the rooms and past tall windows that frame the outside world.

In the first room, there is a melancholy that speaks to the unfulfilled promise of youth, as young faces peer out of layers of collage. At first glance, it looks as if fabric has been laid over the figures, but closer examination shows instead careful layering of photographs of threads.

Other images, especially those of stylised kabuki actors, are obscured with smoke-like fault-lines that suggest a tear in the fabric of the world. Some of these photos are repeated in the final space, the corridor that leads back to the outside world. Images that, in the first room, were masked and filled with longing, reveal a lighter expression of avant-garde theatre when the original source photographs are not obscured by collage.

Noonan’s work seems both timeless and firmly rooted in a bygone world of black and white photos, wooden dolls, and childlike performances with ribbons and masks. He draws on his own extensive collection of imagery and photography for his artwork. Many of the images are from the 1960s and 1970s, an era when the world was simple, made of wood and fabric. This old source material gives his work an archaic aesthetic, and in some pieces, I’m reminded of the freedom and experimentation of Woodstock. In others I feel as if I’ve stepped into a 1960s Bertolt Brecht performance. In still others I feel as if I’m looking at old books I had as a kid in the 70s, but with masks partially obscuring the children’s faces.

In the second room, large characters stretch and ache to escape the confines of their printed world, surrounded by black walls that evoke a maze or dimly lit corridor. Most of the other pieces in the exhibition are static, as faces gaze gloomily out of layers of monochrome, but in this room, the images are active, battling with the edges of their world, forcing their way into our consciousness. While the original source material might be simple, the way Noonan plays with the images changes them, breathing new life into them with each new treatment.

In a room overlooking the vines of TarraWarra, you’ll be captured for over 20 minutes by a slow-moving, mesmerising 16mm film projected onto six conjoined LED screens. Accompanied by a dream-like score by Warren Ellis (of Bad Seeds fame), this is the central masterpiece of the show. At first, the conscious brain wonders what’s going on as faces, blackened landscapes, fish kites, textures and fabrics, old dolls and arcane shop windows drift past your view. As the yellow or black smoke washes over the images, you’re forced to put aside the questioning mind and just be, just watch, just wait.

The piece is called Mnemosyne, after the goddess of memory. One of the few titled pieces in the exhibition, it is aptly named. The coloured smoke (or clouds) obscures and reveals, drifting over the surface of the still images in the way memory comes and goes. The smoke is actually pigments dropped into water; Noonan shot the films through a fish tank filled with water. It’s beautiful, poignant, disturbing and peaceful.

Noonan, born in Ballarat, is one of Australia’s most significant contemporary artists, although he is now based in London. This exhibition brings together pieces from galleries across Sydney, Melbourne and London and is a unique opportunity to see such a large collection of his artwork in the one space. The deceptive simplicity of black and white images printed on linen, tapestry and collage is anything but simplistic. Each piece invites us to stand still, to let it be, resisting the desire to explain or understand intellectually.

Indeed, the title of the exhibition – Only when it’s cloudless – reminds us to just be in the present moment. It is an adaptation of writing by a 14th Century Japanese Buddhist monk, who reminds us that we should not look at the moon ‘only when it is cloudless’. The world – and this exhibition – has far more to offer us if we look at the shadows and the edges of the seen and allow what’s there to reveal itself.

David Noonan: Only when it’s cloudless is showing until 11 July 2022