This year's edition of the NSW Visual Arts Emerging Fellowship is a tight and punchy exhibition, with a strong focus on materiality, experimentation and conversations that count.
Gina Fairley 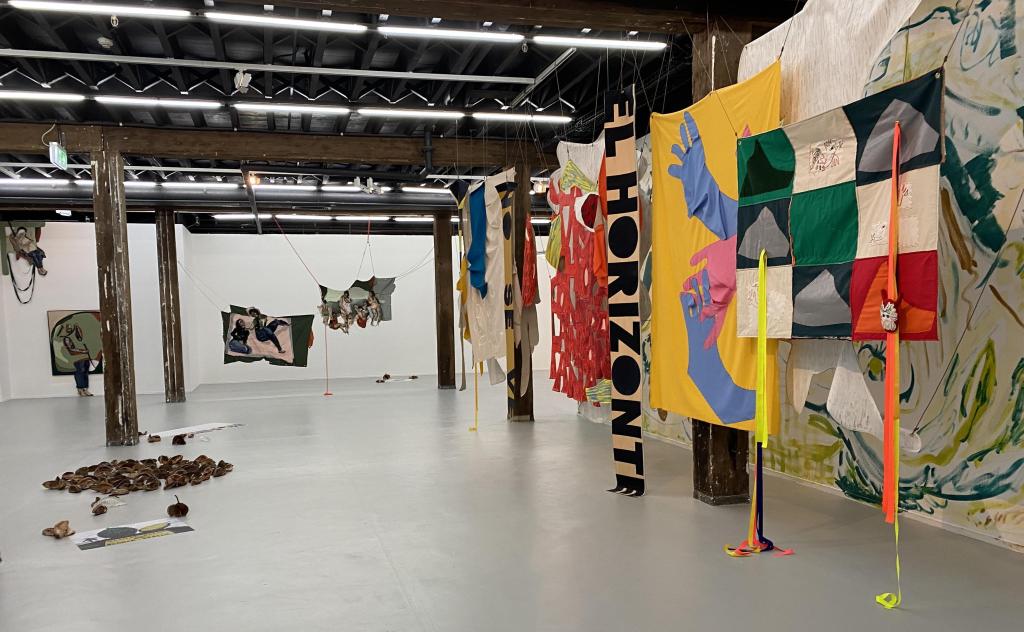 Each year Artspace partners with Create NSW to present the NSW Visual Arts Emerging Fellowship exhibition. It’s like the ultimate dance card date for an emerging artist to receive. And more so, it equates to $30,000 if you are the one to be awarded (announced 14 November).

Understandably, it is a diverse show in terms of making and practice, however, this year there’s a strong materiality and experimentation across the pool.

There’s also a fabulous diversity culturally across this group of artists, which is a true celebration of the landscape of contemporary artists working today in Australia.

Walking into the space it feels fresh. There is the immediate chatter of Kate Brown’s experimental voice and video work that clusters on the ancient timber columns of The Gunnery like barnacles.

Alongside is the bold colourful seven-meter textile work of Nadia Hernández, and in sight of both, the expansive ribbon of Kirtika Kain’s experimental prints, acting as a kind of quiet anchor across the space.

This is perhaps best witnessed in the work of Tiyan Baker, who has created a series of resin sculptures that sit alongside, and mimic, the husks of durians, which have been scattered in clumps throughout the exhibition, and are offset by graphic text and propaganda.

Completing her installation is an olfactory element that is said to, ‘blend the smells of coconut oil and Durian to contaminate the gallery space’.

While I struggled to get that unique pungency on the wet day of my visit (I know it well having lived in Malaysia), Baker’s installation plays off that Western repulsion and wronged perception of the durian, which is a symbol of great nationalism for many Malaysians.

I always remember a friend calling durians, ‘the power rangers of fruit’, gutsy crusaders for identity and cultural heritage that are fertile and prolific. It is easy to understand then, drawing on her Bidayuh ancestry of Sarawak, where her family farms durian, Baker calls on the fruit as an allegory for loss of culture, language and traditional methods due to colonisation.

The hang of this Fellowship show is simply, great. It is not your kind of box-tick progression through a roll call – seen and on to the next artist – but works thread and play across the two galleries, throwing up new conversations in different juxtapositions, or blips of recognition and repetition.

Kain’s 30 screen-prints for The Solar Line take on a sculptural quality; the paper seemingly embossed with raised text, and drawing on her Indian Dalit heritage (the ‘untouchable’ caste), and interrogating language, ‘as a weapon of oppression’, she describes.

These prints appear as jewels in rich golds and reds, denoting messages of value and ritual and using materials such as gold leaf, tar, religious sindoor pigment and green screen printing emulsion. And yet they are frayed, cracked and scarred; their frames often exposed adding another conceptual level of containment.

Kain uses salvaged and recycled silk screens sourced online. Each one has excerpts from the Laws of Manu, ‘an ancient Hindu legal text that codifies caste and patriarchy,’ explains Kain.

There is a nice play on the cycle of reproduction with a print, but more so, Kain calls to question the validity and veracity of the Law, which still holds currency in contemporary India – a country that has one of the highest global rates of rape and injustice against women.

With a similar tone of dishevelled opulence, Dennis Golding recreates the Victorian fencing we find on Australian terrace housing in his work Cast in cast out – but in his hands the lacework panels are cast in epoxy resin and iron oxides as fragments.

Golding explains that the reproductions stand in for memories broken over time. Growing up in Redfern, a suburb of Sydney steeped in 20th Century immigration and factory migrant workers, Golding pulls apart – literally – these colonial vestiges of land ownership and architecture. In the gallery space they cast gorgeous shadows, that adds to his conversation of a bygone era.

Bring a tech tick to the show, artist Akil Ahamat presents an immersive glass sculpture and sound dome, which continues his exploration into autonomous sensory meridian response (ASMR); while at the other end of the exhibition, Tarik Ahlip turns to photovoltaics into art, a technology known for converting light into energy, such as solar panels.

In complete contrast but also taking a tone of political comment, Nadia Hernández’s suspended textile has a placard quality to it, but it is liberated by its palette filled with optimism.

‘The work speak to the concept of protest and resistance through the lens of querencia – a Spanish word that relates to desire and the gathering of our personal sense of strength,’ she explains.

The artist developed this work with her Venezuelan mother and grandmother across borders and countries during COVID, at a time when the message to stay unified is most important, especially when oppression is so tenuous.

The other textile work in the show also carries strong narratives. Julia Gutman’s large scale embroidered tapestry features portraits of herself and the women in her life. It was created using offcuts of fabrics and materials donated to her by those represented in the work, and like Hernandez bringing the very personal into the universal.

Gutman interest in queer feminist dialogue use categorically a ‘feminine craft’ in order to force a more fluid language of representation.

Now in its 24th year at Artspace, the Fellowship continues to define new generations of contemporary art practice for both artists and audiences. This year it is a particularly good selection.