Fate arrives with a candle and lays out a path of pebbles for us to follow, or in this case, threads.
Melinda Keyte
[This is archived content and may not display in the originally intended format.] 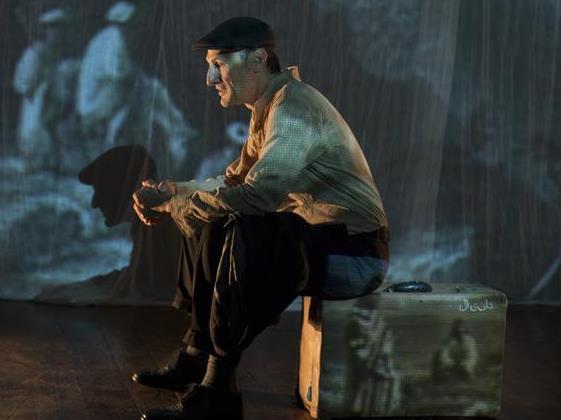 One of the many signature gifts the mysterious guide, deviser and solo performer, David Joseph presents at fortyfivedownstairs’ season of Deceptive Threads is that, ’you are the person you were intended to become.’

Joseph has a conundrum to solve about his family; his heritage and his understanding about where and how his family came to navigate their new home in the years since federation had passed. The strains of Lebanese oud and oriental sounds wrap themselves around the theatre as we climb mountains, board ships and see visions of both past and future all through Joseph’s powerful transformative skill. He tells us, ‘Hi I’m David and I’m here to tell stories’, and with that vanishes behind a curtain from which he emerges in multiple guises that pull us through history: what does it mean to be an immigrant forced to make sacrifices? An immigrant who has the right to both claim and keep their heritage as they navigate their alienating new worlds.

A master performer with a chameleon like charm, Joseph takes us on a rich, fascinating and deeply troubling journey of self discovery through his ancestral family line of the fathers. The sheer scope and detail of the storytelling is mind bending as he introduces stereotypes that are to be instantly discarded. Joseph deftly reveals his family’s real and extraordinary hidden past; thread by thread. It’s the unravelling of what is unseen, unheralded and cast off that director Karen Berger and Joseph successfully excavate. Multi-positioned voices makes Deceptive Threads so compelling to watch. Joseph’s heroes are funny and unexpected – a crooner of tunes at Melbourne’s Tivoli Theatre segues into shady corridors of those who harbour dark secrets.

There is one pre-recorded voice that suspends the action for a touch too long and breaks the atmosphere into something more stark than it needed – but it’s a minor criticism.

Some other stars of Deceptive Threads are the images and projections designed by Zoe Scoglio and Hisham Tawfiqi. They are so integral to the storyline and so beautifully crafted and directed that they simply become a document of storytelling in themselves. The rhythm of these images flowing in and out of Joseph’s narrative – creating breathtaking suggestions of both illusion and reality in a kind of suspended space between real life and the artificial construction of memory.

Joseph is asking us to be a witness and not avert our eyes from the erasure and subjugation of refugees and those fleeing the horror of places like Syria.This stretches back to the erasure and loss some of his own family suffered as immigrants in a wave of sound and fury.

A sumptuous lighting design by Bronwyn Pringle renders the shifting moods evocatively, through space and time, in both the physical theatrics and the minimal but highly effective set – made up mostly of a typewriter and very clever set of drawers – to the richly coloured tapestry of photo-journalistic light projections.

This is an assured theatrical triumph for Bowerbird Theatre and not to be missed. A poignant, deeply personal and moving performance that asks the question ‘is the past really the past?’ It challenges us not to look away from where are we are now in positioning those forced to leave their homelands in search of distant shores.

Rating: four stars out of five