An exploration and subversion of the conventions of Indian Kathak dance.
Megan Koch 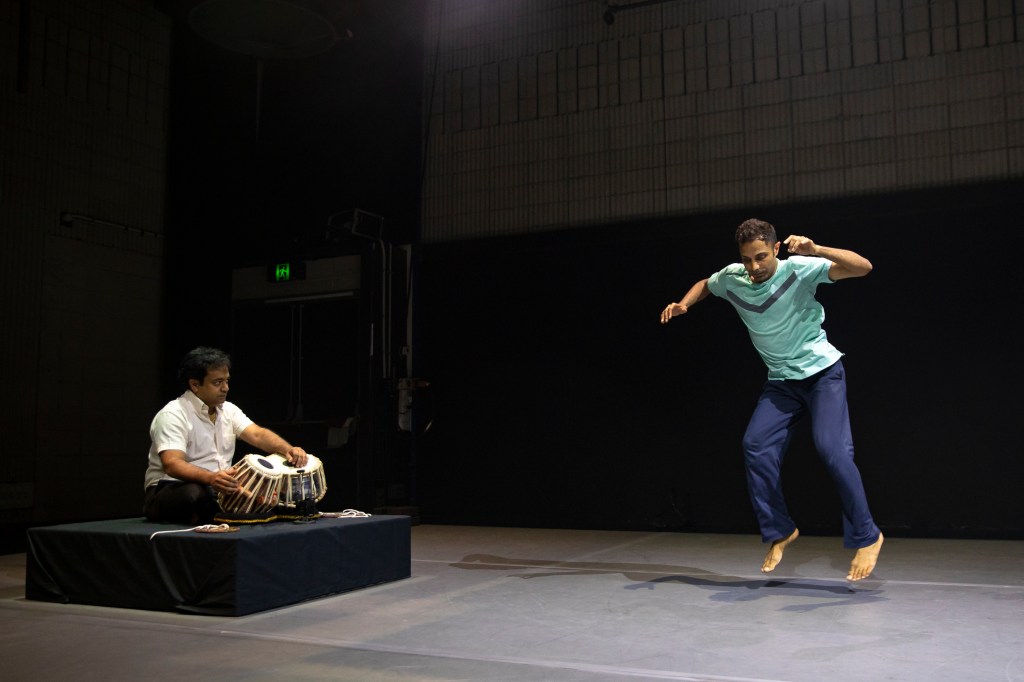 Maharshi Raval and Raghav Handa and their ‘refreshing approach to a traditional artform.’ Photo by Joseph Mayers.

As we file into the theatre and take our seats, Raghav Handa is already on stage, warming up. He stretches, paces across the floor, and examines the equipment strewn about the space. To murmurs from the audience, he picks up a stack of bricks, places them on his head, and wanders back and forth, rearranging the blocks into new formations with each turn. It’s a skilful balancing act, and an apt image for a show that from beginning to end has been carefully composed: a showcase of partnership and working in harmony, of negotiation and trust.

Two features the talents of Handa, a contemporary dancer, and tabla musician Maharshi Raval, who together explore and subvert the conventions of Indian Kathak dance. Snippets of storytelling throughout the show reveal that theirs is a partnership – and friendship – of many years. This dynamic allows the playfulness of familiarity to infuse what is also a polished and skilfully choreographed performance.

The show is structured in two balanced halves. The first, presented as a practice session, lets the audience in on everything from the set-up and tuning of the tabla drums, to the hierarchal tensions between musician and dancer, to the strict training routines – rigorous, precise, repetitive – that display the phenomenal technical skill of both Handa and Raval. The minimalistic setting of the Space Theatre is the perfect backdrop for this focused examination of the essential elements of their partnership.

A somewhat unexpected interlude involving a frame of flashing lights and some remixed Elvis Presley leads into a more colourful second half. Dancer and musician again work together, this time in a number of vivid, expressive routines. In one strangely captivating sequence, Raval sits on a small platform playing a solo piece while Handa pushes this platform around the room, making Raval turn and glide under the lights. Moments such as these exemplify the show’s characteristic mix of whimsical, light-hearted experimentation and deep respect for an established artform. It’s also a lesson in the beauty and significance of collaboration.

Two is a joyful show, displaying the artists’ appreciation for their craft and for each other. Moments of humour are woven into the performance at every turn, through stories, physical comedy, and playful repartee. It’s a surprising and refreshing approach to a traditional artform, executed with grace and a light touch.

Two was performed for one night only, 3 November 2021, as part of OzAsia.