An orchestra with electronic innovation and a flair for the dramatic.
Meg Henry 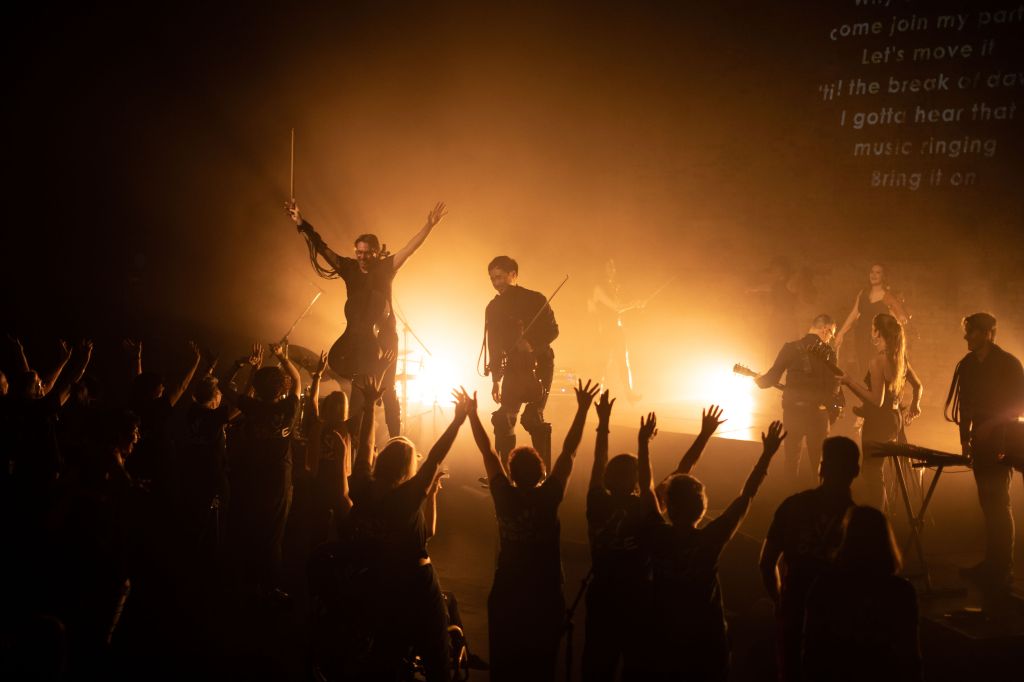 Supporting act K Mak, a creative enterprise by cellist Kathryn McKee, set the scene clad in netball uniforms and tutus, filling the repurposed 1920s tram power station which is Brisbane Powerhouse with synth heavy, string heavy, and emotion heavy electropop. Alongside Kathryn McKee, who took care of the vocals, keys, and soundscapes, were musicians Emma Hales on cello, Mimi Versace on violin, Elias Kokkoris on bass and Sam Mitchell on the drums. Their stunning performance set a precedent and I could feel the unquestionable hum of excitement K Mak generated as the audience eagerly awaited the rest of the night.

DeepBlue’s vision is to facilitate human connection through innovative and unique musical experiences. Throughout their performance, they revealed how COVID-19 became a catalyst for a period of discovery and reinvention, as their members – like billions of people across the globe – were plunged into lockdown.

DeepBlue used an Electronic Show Programme (ESP) to connect with both their audience in the auditorium and their online audience who were livestreaming the event. The ESP allowed individual members of the audience to access information about each piece of music and share their thoughts with the performers and everyone else watching.

Through this interactive feature, questions were posed prompting viewers to have their own moment of quiet contemplation, and if desired, to share their thoughts via the visuals in real time. It was through the ESP we learned that some audience members had seen DeepBlue’s very first performance in 2006 and had returned 15 years later for more.

DeepBlue’s opening piece, ‘Can You Feel the Sun’ (written by Zinia Chan) was hauntingly beautiful. As the swells of the music began, I looked around the audience and witnessed everyone in a state of total rapture, lost in the overlapping melodies, accompanied by recordings of birds and noises of the jungle slowly coming into consciousness. The ESP question accompanying ‘Can You Feel the Sun’ was: ‘What has been your silver lining?’ The responses that illuminated the backdrop of the show were sentiments like ‘sunshine and good friends’ and ‘the thought of retirement’. DeepBlue shared that it had been a quieter year for them than usual, but their silver lining was, ‘space for introspection, reflection and the time and energy to think about who we are and what we offer to the world’.

Some people may consider kneepads and high heels an odd fashion choice. Not DeepBlue, and it soon became apparent why. Dancing while playing a classical instrument is one feat, but throw a hula hoop, some stilts, and a bit of contortionism into the mix and that’s what makes DeepBlue unique. At one point, Wayne Jennings balanced his cello upside down and performed dizzying spins. He ended the routine by throwing his sleek black cello in the air.

I had the opportunity to speak with Jennings after the show, and I asked him how he feels when he sees the crazy antics of the band members playing next to him. He explained to me that when he sees someone radiating energy, it inspires him to reach new heights. And quite literally, nothing elevates a performance more than stilts.

Comparable to the zeal and mastery of Cirque du Soleil performers, DeepBlue’s performance brought the sexiness of Charlie’s Angels, the passion of Roman gladiators, and the knee pads of amateur skaters dropping into the bowl for the first time.

At times, the musicians appear to be duelling, bringing a ferocious and passionate energy to the stage, brandishing their musical bows like swords. They weave around each other as if controlled by the same puppet master. Narrowly but expertly veering away from violin bows, it’s a wonder members don’t take out insurance on their eyeballs. I could see the band exchanging knowing and confident smiles when they were in the shadow of the spotlight illuminating the soloist of the piece; violinist extraordinaire Evan Setiawan’s smile didn’t leave his face the entire show.

In other songs, the performers adopted auras which could only be described as maternal, cradling the audience with a delicate and fond tenderness. Words can’t do justice to the dissonant tones of Emma Hales’ cello solo in ‘Flying Dream’ by Iain Grandage. After this moving piece, a member of the band asked the crowd, ‘You like that?’ which prompted a collective and drawn out ‘YESSSSSSS!’

DeepBlue and K-Mak performed for one night only: 22 October 2021 at The Powerhouse Theatre, Brisbane

Meg Henry is a Brisbane-based student who likes to see as much live music as her university workload allows. As a third-culture-kid who grew up on the island of Borneo, she brings a unique lens to the arts, music, and performance scene. When she's not sprinting to make it in time for her 8am lecture, you'll find her at an Op shop, and hunting for 80s memorabilia.