Seductive and transformative, the siren's call is strong in this production.
Leila Lois 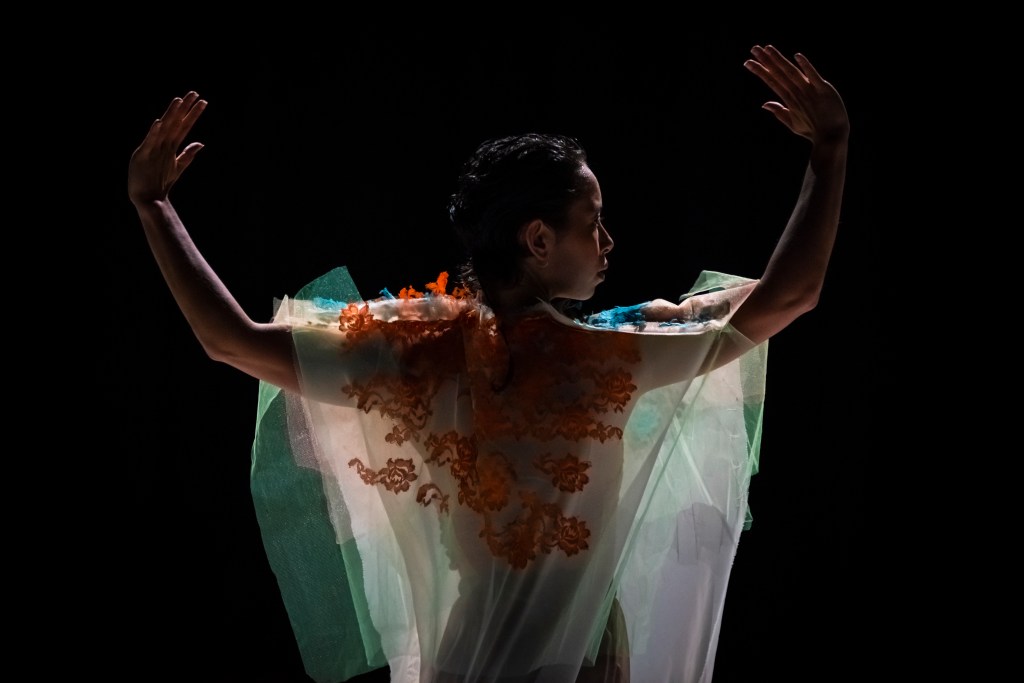 ‘Siren Dance seems to provoke us to consciously consider our gaze and our relationship with desire.’ Photo by Gregory Lorenzutti.

Siren Dance was an absolute maelstrom of a performance; it sucked you in, helplessly. Developed by Lilian Steiner over the past few years in Europe, Siren Dance has undergone a stunning remounting at Dancehouse and is a shining example of how cutting edge and exciting their program is. Steiner has used classical references and symbolism, the siren luring sailors, to give audiences a fresh and provocative look at magnetism and disguise in performance.

For the first section of the choreography, Steiner entered, Giselle-like, floating en pointe in lines across the stage, with occasional hand movements, like flicking water. She wore a ghostly gossamer creation by Geoffrey Watson and had her back to the audience. We were left hankering to see her face as she tantalisingly turned towards us with her hands in front of her eyes. There was a strong sense of play with the gaze, as she lured us further into her pelagic world. Latent in the piece was a sense of dread at being ensnared, being consumed by desire and all the pitfalls that come with it. As Steiner sat with her legs out to the side in a mermaid posture, batting her eyelashes rapidly at the spectators. Steiner mentioned in her program ‘a peacockish play of power’, something that she expertly embodied in her Helen of Troy-like stare.

The serenity of this first movement developed into frantic dancing with a tambourine, the pointe shoes became percussive and took over her body, reminiscent of The Red Shoes. UV light was used to enhance the eeriness, via lighting designer, Giovanna Yate Gonzalez. The piece played even further with voyeurism, as we watched Steiner undressing and changing from a railing behind the curtain. Her second costume resembled kelp and seaweed, as she swished across the stage, legs bound and body rippling like a mermaid. Her skin was iridescent with glitter and her wig bedraggled.

The sinuosity of Steiner’s movement, and seductive carriage of her arms was mesmerising. The final part of the performance entailed her wrapping her body in hessian and seashells, perhaps a nod to the selkie myth, discussed by feminist writers, of the way women have been coerced to denounce their power and shed their instinctual sealskin for the patriarchy.

The final scene saw the words of a hymnal, curated by sound designer Marco Cher-Gibard and featuring Aarti Jadu, cast luminously onto the black curtains. The mournfully beautiful words were sung and projected as Steiner gave her last gasps, dancing until she coughed a carefully concealed piece of bait (some sort of goo) from her mouth. We read the lyrics: ‘It is the voice of emptiness below that tempts us…’; we ‘fall (into desire) again against which we defend ourselves.’

Siren Dance seems to provoke us to consciously consider our gaze and our relationship with desire. It asks us to confront our fears of vertigo and falling into an abyss. Rather than apocalyptic however, Steiner presents a piece of work that is curious and mind-opening. Her ability to hold audience attention, transfixed, over the course of 50 minutes feels like a form of sorcery. It was a powerful piece that will stay with the viewer long after the performance.