Love and ballet play out on a tennis court in this new work choreographed by Scott Elstermann.
Lucinda Coleman 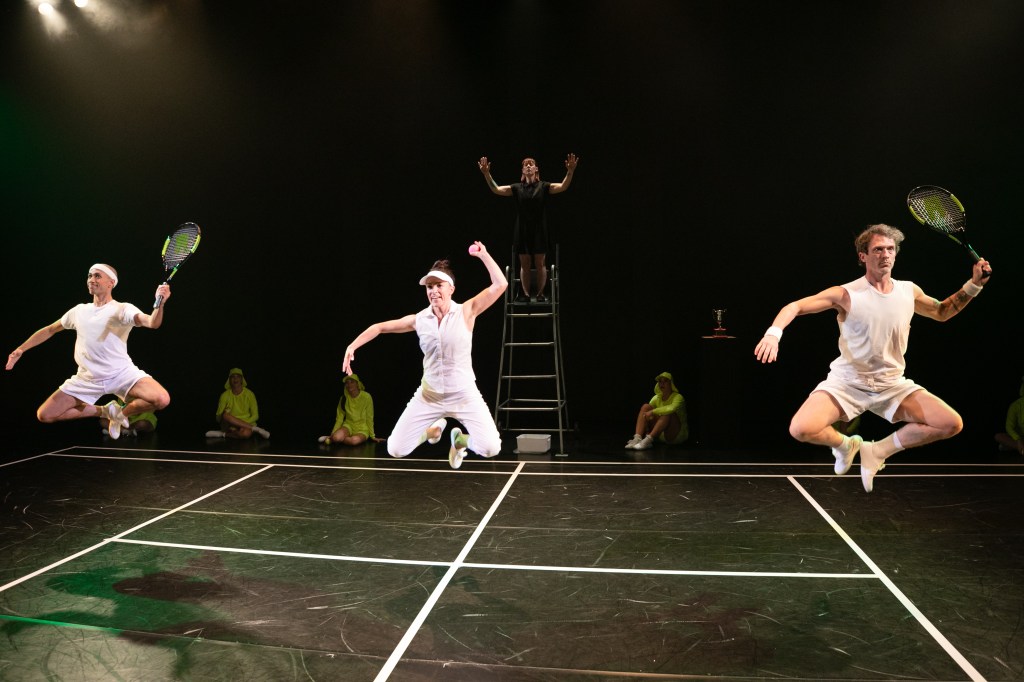 Petrushka tells the story of three puppets, the Ballerina, the Moor, and Petrushka, who are brought to life by the Charlatan during the 1830 Shrovetide Fair in Russia. Igor Stravinsky composed the orchestral score and developed the story with Alexandre Benois, who later designed sets and costumes. Michel Fokine was the choreographer. Vaslav Nijinsky performed the role of Petrushka in the Ballet Russes Paris season première. The work was hugely successful and has been ensconced as repertory in the classical ballet canon ever since.

Petrushka (Game, Set, Match) is a movement smorgasbord that interweaves gymnastics, ballet, contemporary dance, and pantomime. The 35-minute work is a quirky re-telling of the much-lauded story ballet in the form of a tennis match in which two players, Petrushka and the Moor, compete for the attention of the Ballerina, while a fourth figure, the Magician, manipulates the outcomes of the tennis match and of the relationships.

Elstermann responds well to Stravinsky’s musical score. His thematic material is ambitious for the length of the work as he aspires to draw from the series of four tableaux featured in the original production: in his words from the program notes, ‘Taking the core elements of the original ballet and transporting them to a tennis match.’

Molly Werner’s costume design is simple tennis clothing: white shorts, T-shirts, tennis shoes for the lead dancers, with lemon-coloured tennis clothing for the Ballkids while the Magician is dressed in black. Peter Young’s lighting design subtly enhances narrative through stage washes and spotlights which directs audience focus to various characters’ point of view. The set construction is stripped back to that of a tennis court.

In deconstructing set, costume, and choreography, Elstermann invites new perspectives on an old tale by envisioning a love triangle formed by the players involved in the tennis match, and in ‘match-fixing’ as the Magician determines the outcome of the game. The names of characters might also have been rigorously examined in a contemporary light, offering fresh perspectives on gender and race. The racially and culturally compromised representation of the Moor as a blackamoor puppet in the original Petrushka, calls for reinvention in contemporary theatrical contexts.

The lead dancers, Laura Boynes, Bernadette Lewis, David Mack, and Tyrone Earl Lraé Robinson, are experienced, focused, articulate performers. They are mature artists at ease on stage and invite engagement with story though their relaxed interaction and quietly confident performances. Mack’s dancerly quality as Petruska contrasts with Robinson’s athleticism as the Moor. Lewis dominates the space as the puppet-master Magician, directing the action on court. Boynes coyly smiles as she moves between players, toying with emotion as she takes the position of umpire of the game.

Elstermann’s choreography for the lead dancers is a strength of the work. In one instance, the Ballerina’s solo is reinvented as she is carefully supported by the three other dancers who lay side-by-side on their backs, legs vertical in the air, feet flexed to hold Boynes as she reconfigures shapes atop the six flexed feet.

Emily Coles, Briannah Davis, Jo Omodei, Bianca Perrone, Giorgia Schijf, Emily Tuckwell, execute ensemble work as the Ballkids with meticulous timing. The use of balls dropped and caught as part of the choreography seamlessly integrates props with movement design. In one suspended moment, the tennis players remain motionless mid-swing on court, as multiple balls arc through the air, curving from one end of the court to the other in a dance of their own.

Elstermann’s professional work ethic undergirds the rehearsal process. The outcome is a polished, well-rehearsed piece of dance theatre, cleanly sculptured to tell the story of an age-old tale of love, jealousy and competing affections. As a choreographer, Elstermann has a clever capacity to infuse humour into narration. He crafts stories through the construction of bodies in time and space, paying attention to humorous details which are relatable for audiences.

It needs to be noted that contemporary interpretations of classic works, such as Petrushka, are brave because inherent in the act of (re)making is an examination of past and present contexts for creating dance works and a contribution to the discourse on performance making. Re-making an old Russian ballet as an Australian sporting event (communicated in the genre of dance theatre) speaks to a uniquely Australian interpretation of the ballet story, a challenge to the ballet canon, and the unsettling of historic representations of peoples and places.

The provocation of such work is to raise questions about making dance theatre in Australia: how are our dance works new or inventive? What stories do we need to be sharing about our cultures, peoples, and places, at this current time in history? Elstermann’s response in Petrushka (Game, Set, Match) is to embrace storytelling with light-hearted humour and fusion of form.