A performance that parlays the many benefits of dance: escapism, connection, seeking a greater purpose.
Leila Lois 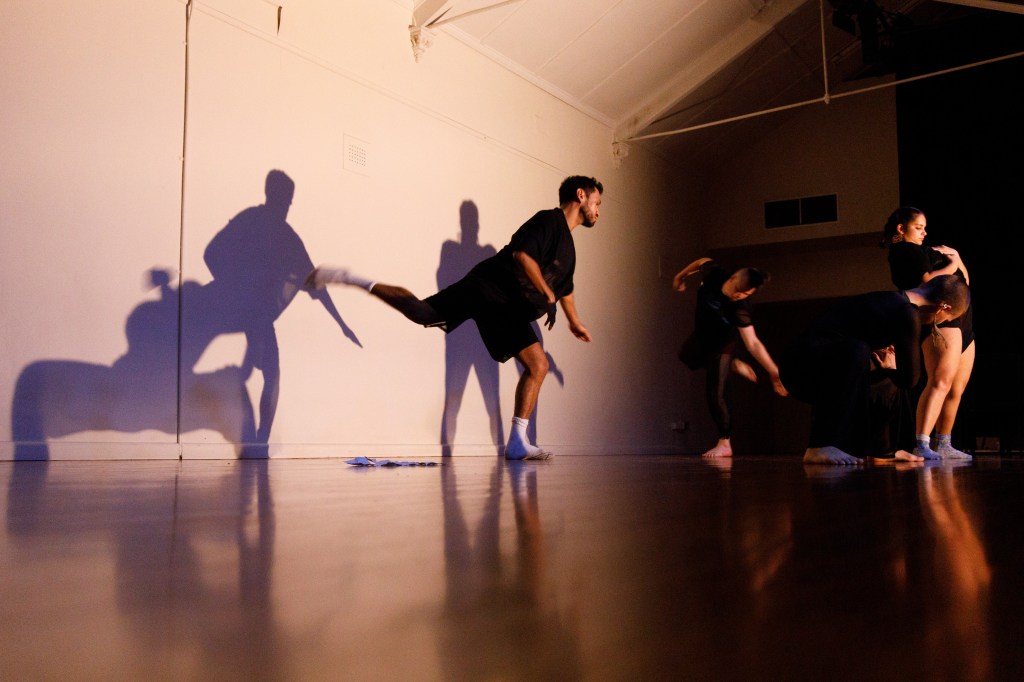 ‘The common thread in the stories was the level of devotion and connection each of the dancers felt through dance…’ Photo supplied.

‘Womenjenka, meaning come with purpose’, Ngioka Bunda-Heath announced at the beginning of the performance as she introduced Bridge, curated with three other dancers for Dancehouse’s season one. The piece followed four dancers, in cinematic elliptical movement as they danced and narrated the stories of how they found dance, or how dance found them.

There were moments of shared experience; as each read aloud a personal letter, mentioning encounters with shame and self-consciousness but also affection and belonging. This culminated in the final scene, with séance-like chanting of ‘being alone’, ‘failure’, and ‘loss’. Dance was proffered as an escape from these tragedies in life and a means of connecting with others, finding one’s identity and greater purpose.

The lighting by Lisa Mibus, was both comforting, with balmy gold tones, and populated with darkness, as stark shadows were cast on the wall, which the dancers played with in tableau. The score by Daniel Nixon was warm and melodic, with occasional moments of sadness, as the dancers recounted tender childhood memories of dancing. These included being taught dance moves to Michael Jackson by a brother; being laughed at by peers and dancing around the lounge room as a fairy. The common thread in the stories was the level of devotion and connection each of the dancers felt through dance, when faced with fear and tragedy.

Each of their monologues was followed by a mesmerising dance re-enactment of sorts. One of the most striking was a voguing pas de deux between Tamara Bouman and Joshua Twee after a recount of a moving experience dancing in a club.

Bridge moved from the absurd to the sublime with finesse, as Joshua Twee sat down beside an unsuspecting audience member and enacted a stilted conversation on a tram, prefaced with ‘How you going?’; highlighting the microaggressions and reactions he has received due to his hyphenated (Asian-Celtic) origin. His background in stage combat and martial arts really shone as he back-flipped across the stage with perfectly calculated abandon.

At many points in this show the words and movements burned and soothed as we were confronted with the prejudices and demons of our own and others’ worlds. The way the dancers smoothly tessellated and turned through their floor work, like dials of a clock or pendulums and over each others’ bodies was simply beautiful.

In Bridge, these talented co-choreographers and production team have achieved a masterful work that expresses the ineffable, and has the guts to face up to the darker aspects of being young and feeling different in a society which is still so mired in discrimination and self-scrutiny. It was a pleasure to witness this work and to be welcomed, with purpose, into the space.