Stompin's latest work was originally supposed to be presented in April 2020, and has benefitted from the extra-long development process.
Lesley Graham 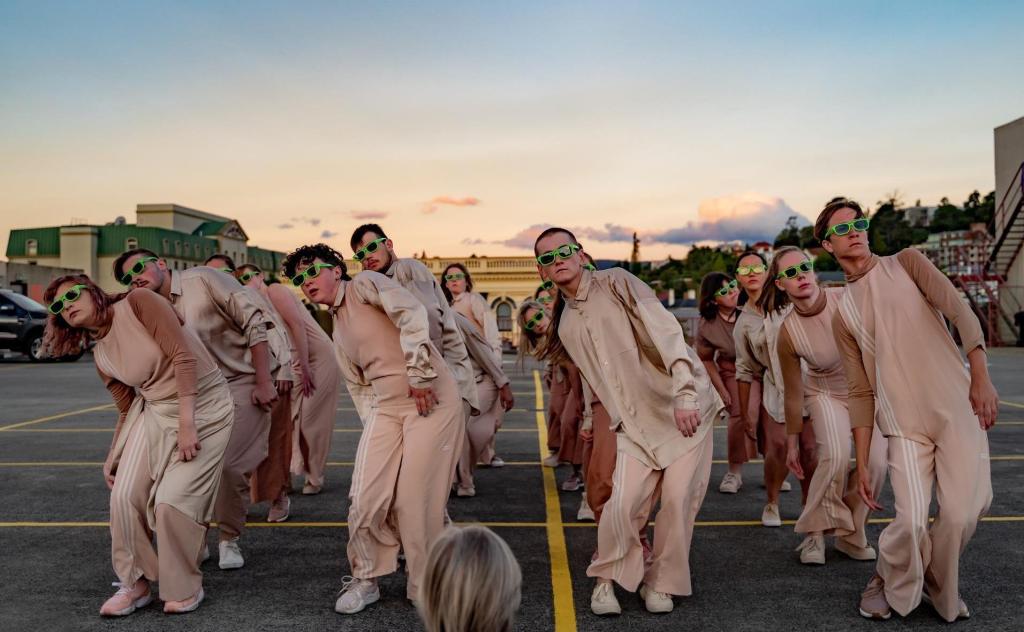 As one of MONA FOMA’s northern Tasmanian offerings, Launceston’s youth dance company Stompin finally gets to show a work originally developed for performance in early April 2020.

Clambering up the concrete chamber of Launceston’s Paterson Street East Car Park, we meet mannequin-like figures at each level of the staircase before being guided to seating options in parking bays on one side of the penultimate level. This is not the original site for this work as it has been raining; however, the atmosphere is strong with the additional concrete supports and chance positioning of parked cars, which I think I would now miss if we were on the roof top. In fact, the 18 young performers’ reactions to the placement of the audience, poles and random cars (yes the owners got quite a shock when they returned) offers delightful spontaneity to this work, much of which appears to be improvised between larger ensemble sequences and shorter duos and solos.

The gridlines of the parking spaces are a tempting pathway for a long section of catwalk-like parading. Sometimes cutting through and sometimes following the lines, the flesh tones of the costumes emphasise the bland gestures of the mannequins with equal parts potential and slightly creepy overtones. Individuals seem to reflect the angles of the space around them in a series of interactions with others and the concrete structures. At times crossing paths, they shape their limbs, set the pose and present. Production-line mechanics dominate the background groups, as the frequency of the audience-focused foreground poses builds.

Then a shift. The evenly spread out mannequins are adorned with pairs of sunglasses. This simple addition, along with a change in music, ignites an individual figure way at the back of the group and her solo ripples through the bodies until the group is corralled. A tight ensemble of sharp angles and turns confirms the repetition of motifs.

Up to this point the dancers have shown calm control, then two vehicles enter, and wheelie bins and trolleys are tipped over, spewing bundles of clothes, raining chaos. Figures throw themselves at the chance to grab, toss and drape themselves in what looks like haphazard combinations. Garments are swapped and pairs parade their creations. The floor is covered with consumer choice and then gradually cleared to the lyrics of ‘Let’s Go to the Mall’, making way for a solo accompanied by reference to synonyms of waste – excess, use, spend. As this dancer is egged on, his circular movements are echoed and usurped by larger and smaller groups in an exuberant sequence of following the lead of others.

The final key movement moment emerges when a duo breaks the fluidity by initiating direct contact. Their duet is mesmerising until literally squashed by the weight of everything around them.

A long time coming, this work shows the benefit of the combined input of Artistic Director Caitlin Comerford, with guest choreographers Jack Ziesing and Jenni Large as well as the reflection, refinement and even relocation (more than once) that has been imposed on it during the extra COVID-long process.