The singer takes us through four decades of his career with a set under the stars.
Ned Hirst 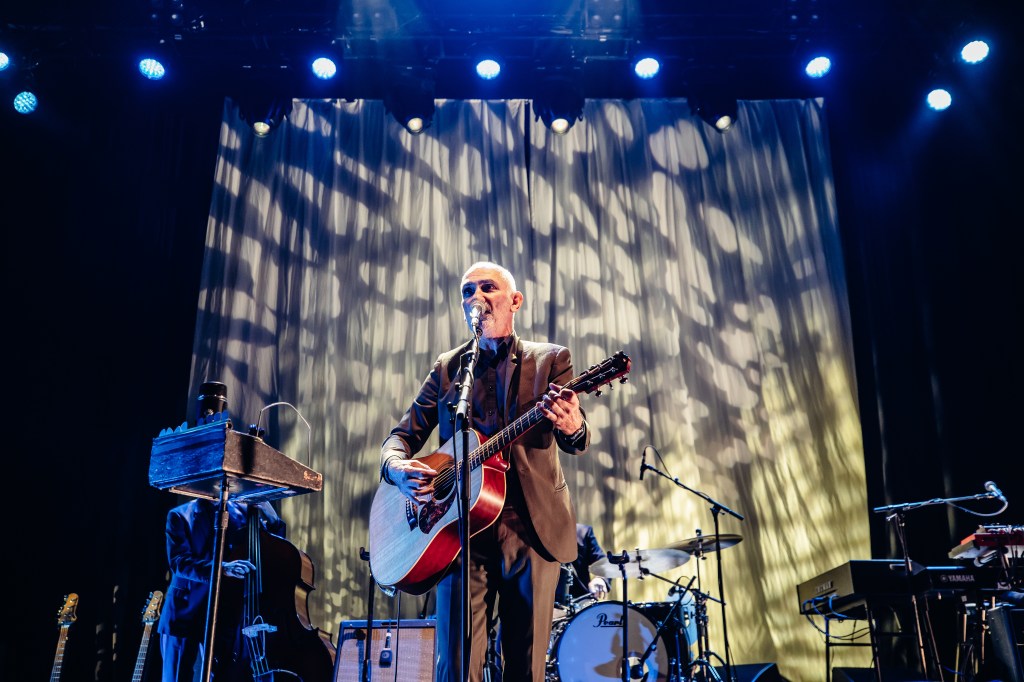 ‘For the most part, the songs sound much the same live as they do on the records.’ Photo by Jordan Munns.

As I am sure is the case for many Australians of my generation, it is impossible for me to say when I first came across Paul Kelly. He has always been there, like The Beatles, he just is. And over the past three or four decades of his omnipresence, he has seemed unchanging; an ageless seer of Australian culture.

As a Betoota headline puts it, ‘Paul Kelly Has Always Been 50-ish.’ So there is a slight irony in the theme of his Vivid show, Time and Tide: 4 Decades of Song. ‘Time and tide wait for no one,’ as his song goes but for all his lyrics on the topic of time inexorably slipping away, Kelly looks just like you expect him to and his voice is as clear as ever.  For the most part, the songs sound much the same live as they do on the records.

He starts, appropriately enough for the man sometimes called Australia’s answer to Dylan, with a cover of ‘The Times They Are A-Changin’, before drawing upon his own repertoire of songs on the theme of time. For a songwriter with a lesser or smaller catalogue, such a thematically restricted show might be very short or else involve a lot of padding, but for Kelly it is a chance to draw on some gems that might not make a greatest hits set, like ‘Randwick Bells’ and ‘The Pretty Place’ (in my opinion, one of his finest songs).

Though it should, in fairness, be noted that the theme is interpreted a little loosely – no one is going to complain about ‘To Her Door’ or ‘How to Make Gravy’ getting a run, but it would be hard to argue that time is the main theme of either song.

As with all shows at Vivid, the location is a drawcard and it is difficult to imagine a better spot in Sydney for an outdoor show. The stage is on what I learned for the first time is called the ‘Northern Broadwalk’, that is, on the tip of Bennelong Point between the Opera House and the Harbour with the Bridge behind the stage.

Apart from being a stunning vista, I found the sound much clearer than outdoor shows I have been to in the Forecourt, perhaps because it was more intimate, but perhaps also because the extra distance from the Toaster and its notoriously noise-sensitive residents liberated the sound engineers.

It would be remiss of me not to mention Thelma Plum’s supporting set, which was strong enough that she could have headlined in her own right. Her set finished particularly strongly with a Powderfinger cover and a rousing rendition of ‘Better in Blak.’

And (perhaps this should come with a spoiler warning) she joined Kelly and his band along with Ziggy Ramo and Russell Smith for a powerful and moving rendition of ‘From Little Things, Big Things Grow’.  The song, in Ziggy Ramo’s version, is a powerful call to arms and an exemplar of the way that Kelly’s songs have become a part of the national songbook. Musicians will be doing their own versions for years to come and there is no greater testament to their timelessness than that.