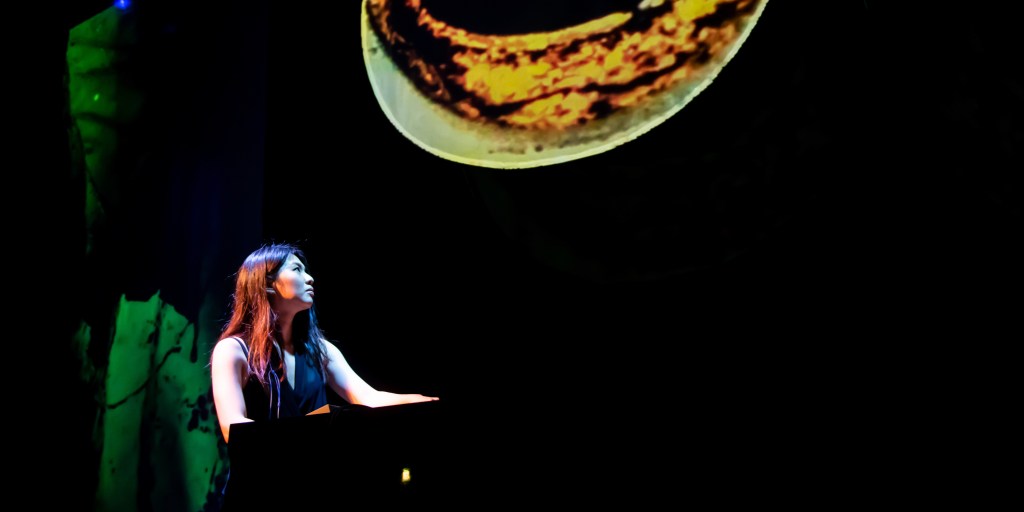 Belle Chen is ‘acclaimed for her new-wave approach to classical and world music and her imaginative compositions.’ Photo by Belle Chen – Photo by Lidia Crisafulli.

Pianist, composer and sound artist Belle Chen is indeed a citizen of the world. She was born in Taiwan, raised in Australia, and now resident for some time in London, where she is an associate of the Royal Academy of Music. These multi-layered cultural and musical influences can be heard in her eclectic compositions for keyboards and electronica.

On the opening night of the 2021 OzAsia Festival, Chen gave the Australian premiere performance of her latest work, Destinations, from the album and concert that were released in the UK last year.

Destinations opens on a black stage illuminated with just a light smoke haze that makes its presence felt at random moments during the performance. There is a piano centre-stage with a bank of synthesizers and other electronic instruments. Three large video screens fill the remaining stage space for the projections by artist Mario Radev and designer Nick Robertson with projectionist Jayden Sutherland.

On stage, Chen plays the piano and assorted electronica mixed with multiple soundtracks to create layers of sound. This sometimes makes it difficult to differentiate between live music and pre-recorded sounds.

The accompanying projections are visual representations of the natural world, with images of the sun and moon and a recurrent focus on the marine environment with its beachscapes, shifting coastlines and coral reefs. There are clear echoes in the orchestration of seascapes, rivers and waterfalls. This is a musical homage to the world around us and together with the projections, offers an engaging space for listening and reflection.

Belle Chen is acclaimed for her new-wave approach to classical and world music and her imaginative compositions. She has a strong online persona and an enthusiastic following for her creative work.

On stage, Chen doesn’t engage with the audience, she simply walks on stage and plays. There are no introductory comments, no explanations of the various instruments and electronica, and no insights into her playing and her creative processes. Combined with the lack of a printed program, this makes the performance unnecessarily obtuse and one only for the musically initiated. It would be much more meaningful if the audience was given a little more information about the performance.

Destinations feature some interesting and illuminating compositions, especially the final piece in the hour-long performance that is punctuated with some dramatic flourishes and rises to a satisfying climax before the stage goes to black and the applause begins.

Destinations played for one night only 21 October 2020 at Her Majesty’s Theatre, Adelaide as part of the OzAsia Festival.

Belle Chen gave a free masterclass at the University of Adelaide on 20 October 2021.