The welcome return of Zoë Coombs Marr to stand up after a year quietened by COVID brings more than just snappy one-liners in this personal show that delivers the laughs.
George Dunford 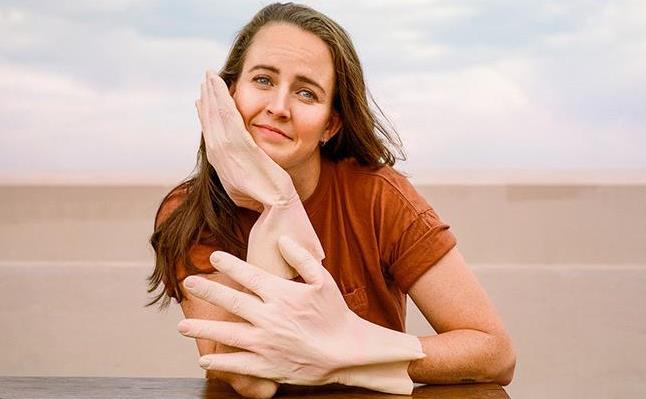 As soon as she comes on in tracky-dacks and a tie-dye tee, you know that Zoë Coombs Marr is committing to being herself. Gone is the neckbearded Dave character that scored her a Barry Award in 2016, replaced instead by the hilarity and heart of an LBQTI+ performer glorying in being back on stage.

This is joyous stand up after COVID limited Coombs Marr’s season of her Bossy Bottom show in 2020 (which ultimately found a home on Amazon as a comedy special). There’s a good succession of one-liners (2020 had her ‘doing more pivots than an under-8s netball team’) and she loves a daggy pun and wordplay as she unearths her high school diaries – like her take on the male gaze. As she talks about how she loves ‘crushing pussy’, Coombs Marr does it with the comedic gift of being at once knowing but bemused by the world. The Dave DNA in still present in Coombs Marr’s delivery, which could cut through any RSL crowd, and her parodic skills are razor-sharp. Some of the gags will be familiar from Stan’s Australian Lockdown Comedy Festival, but seeing them live gives them a fresh life. Coombs Marr is at the top of her game, zagging from a taxi ride to how pollution might affect penis size, surprising the audience with how we all got here.

But rapid-fire gags over an hour just distract from where Coombs Marr is really taking the audience. She lets you know early that she’s a lesbian from Grafton who was defined by playing the solo flute parts at band camp as a 13 year old. It’s not a coming out story but a Steven Bradbury moment which she illustrates with music, a slide show and some truly awful Wiki How artworks.

It’s a winding road – with diversionary laughs into Puppetry of the Penis and vegan boners – but by the end Coombs Marr lands with a powerful emotional note. She has done support shows for Hannah Gadsby in the US, so she laughs off the ‘patriarchal construct of linear storytelling … that mimics the male orgasm’ in its need for simple climax. Instead Coombs Marr brings it together with an ending for the isolated band camp nerds or teens working out their sexuality – not with an easy moral or sentimental inspiration but with a moment of coming together and the promise you will find your crowd.