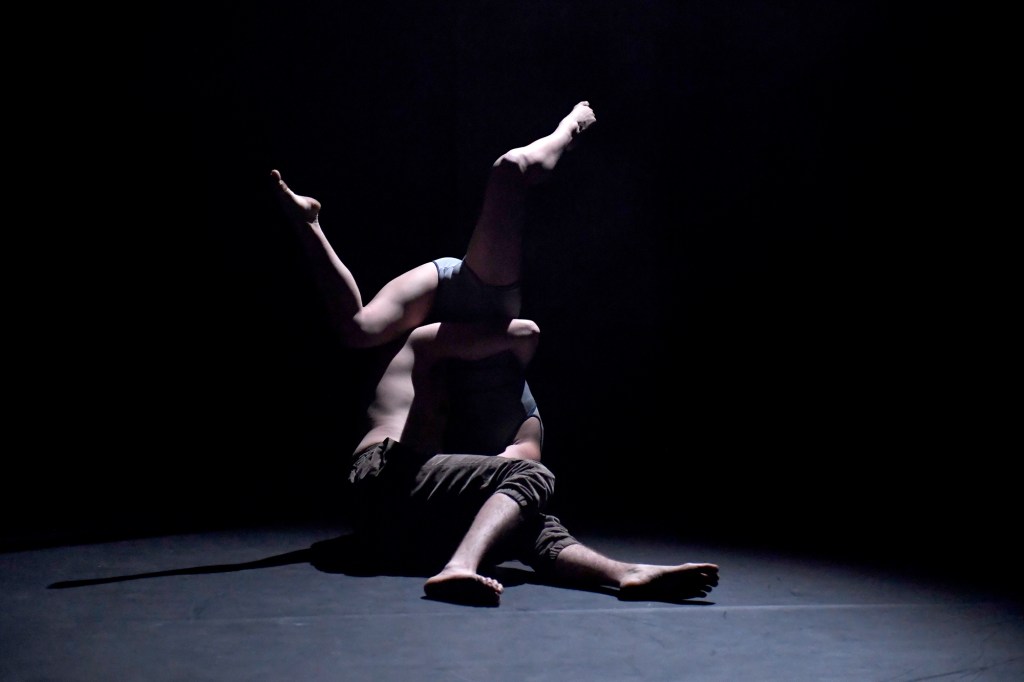 ‘The conflict between cultural approaches culminates as the two face off…’ Photo supplied.

Light dawns slowly on a pair curled up on the floor, locked in embrace. They unfold, almost like flowers, and together begin their choreographed routine, which is at once athletic and acrobatic, elegant and tender. Over the next hour, these two will move through pieces conveying a range of feeling, from playful harmony, to struggle, to acceptance. It is a thoughtfully crafted performance with layers of meaning to unpack.

Common Dissonance is presented by First Nations led company Na Djinang Circus. It is, naturally, an impressive display of physical talent, but it is also designed to be an exploration of how we reconcile traditional spiritual knowledge with modern scientific reasoning. Performers Dylan Singh and Isabelle Champagne-Chittick embody these ideas in dance-like acrobatic routines set to an evocative soundtrack.

The space is kept largely clear of props and equipment, with focus concentrated on the physicality of the two performers and on their relationship. When equipment is introduced, it is done with careful intention and to great impact. A highlight is Singh’s routine with aerial straps, which alternates powerful movement with configurations of poised stillness, in which he hangs suspended as if floating in water (or something more amniotic, perhaps). It’s as elegant as ever, but with a harder edge – a suggestion of a struggle for life.

Champagne-Chittick is just as adept: her sequence with a piece of string so mesmerising that when this symbol of connectedness is abruptly snapped, we feel the jolt of a sudden paradigm shift. As she moves to an electrifying routine using a single trapeze bar, the soft music turns to piercing mechanical noise, and she seems to be in the grip of something robotic and relentless. The conflict between cultural approaches culminates as the two face off, taunting and testing each other in a choreographed clash in which the strength and endurance of both performers is on full display.

The importance of the arts in this journey of thought is also highlighted. At one point, Singh uses traditional materials to paint on a blank sheet; later, Champagne-Chittick cuts harshly across this with a black marker. By the end of the show, a tentative sense of harmony has been restored as the two return to catching and holding each other while together they fold a paper boat.

It is exciting to watch a show that is both immensely satisfying in the moment, with its range of breathtaking circus tricks, and rich food for thought upon further reflection. In Common Dissonance, discussions of how we live and think are transformed from abstract concepts to heart-pumping, flesh-and-bone reality.

Common Dissonance will be performed until 6 March 2022