A sumptuous production that builds on the success of Le Noir and The Illusionists to recreate the grandeur of circus eras past.
Revelly Robinson 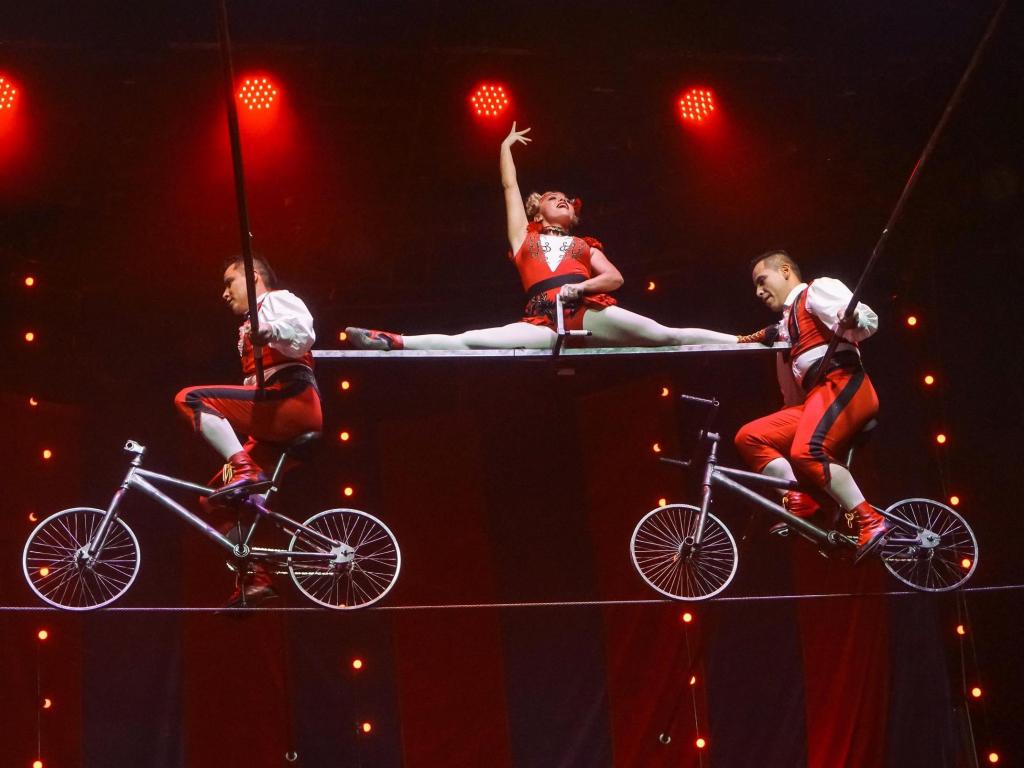 As the curtain opens on natural entertainer David Williamson (aka Ringmaster Willy Whipsnade) throwing packets of popcorn in the air, the audience is transfixed with the sparkle and glamour of a bygone era. Featuring splendid costumes and amazing effects, Circus 1903 recreates the grand days of the big top circus and dazzles with a polished production that will keep the audience truly and utterly enraptured. The global, all-star line-up covers the full gambit of acrobatic talents and each performer brings a spellbinding display of tact and agility to the stage.

It seems The Works Entertainment production team led by Simon Painter and Tim Lawson can do no wrong as each show they release smashes box office records in the theatre world. If anything, Circus 1903 only compounds this trend. With a family friendly format and opportunities for several audience members (including cutie-pie kids) to participate, the performance is two hours of non-stop entertainment. After a comedic primer featuring an adamant seven year old wringing out bill posters for the show, the first act begins with a choreographed dance featuring the Flying Fins. Catapulting themselves in the air with a makeshift seesaw the trio provide the perfect launching pad for the production.

Dispensing ​with a storyline in favour of a showcase featuring the general theme of circus glamour, the ensuing series of acts are stitched together with flawless choreography performed to an outstanding musical score by Evan Jolly. Bringing alive standard circus fair such as a balancing act by the Sensational Sozonov and the tightrope feats of Mexican family, Los Lopez, Circus 1903 nonetheless pulls off these achievements with such flair that it’s almost like watching these tricks for the first time. Even slight mishaps in these acts don’t dampen the enthusiasm of the audience; if anything the occasional imperfection seemed to endear the audience more.

Rolling up in the sideshow are an eclectic bunch of comedians including a bearded lady and man eating chicken. Hailing from Ethiopia, resident contortionist Senayet Assefa Amara twists herself into such hair-raising positions that it is easy to believe she may be part slinky. At one point, when she demonstrates her flexibility by walking her legs in a full circle around her head, which remains anchored on the ground, it’s like watching a scene from The Exorcist; an intriguing display of the human form. Matching the Elastic Dislocationist for sheer grace is the beautiful aerial ballet display by Lucky Moon. Magical to watch, the enchanting Elena Gatilova is the epitome of elegance as she twirls seemingly endlessly in the suspended hoop.

The highlight of the first act is undoubtedly the puppet elephants. As the mother, Queenie, and baby Peanut lumber onto stage the audience is transfixed by these gentle beasts. The puppeteers have captured the motion of the elephant walk perfectly with the elephant tamers lending a hand to manoeuvre the trunk where it needs to be. The simple set up of hessian draped over a metallic frame effectively mimics the contours of an elephant’s hide and creates a sense of wonderment.

The second act sees the elephants make a ​second appearance alongside the flamboyant return of the entire cast in a full parade. Juggling juggernaut the Great Gaston twirls the batons faster than can be believed, integrating horizontal and foot juggling techniques into his routine. In The Cycling Cyclone, Florian does things with a bicycle that should never be tried on at home. The sensational duo in the penultimate act create a visually stunning piece, balancing numerous spinning orbs effortlessly on every limb, with the other cast members assisting to provide a sumptuous backdrop in a white and blue theme. The second half culminates in the fantastic acrobatic deeds of Les Incredibles, another romantically entwined couple who complement each other perfectly to deliver a classic trapeze act.

Circus 1903 is a bonanza of acrobatics and entertainment that will be sure to delight even the most hardened circus cynic. Sound, costume, lighting and design combine to create an overall impression of a professional period production, tastefully wrought and nicely done. The show is well worth watching and with Canberra hosting its debut performance, there’s even more reason to celebrate the return of the circus.