An outbreak of exciting, dangerous theatre in Brisbane challenges the very nature of the current cultural, moral, philosophical and political environment.
Flloyd Kennedy
[This is archived content and may not display in the originally intended format.] 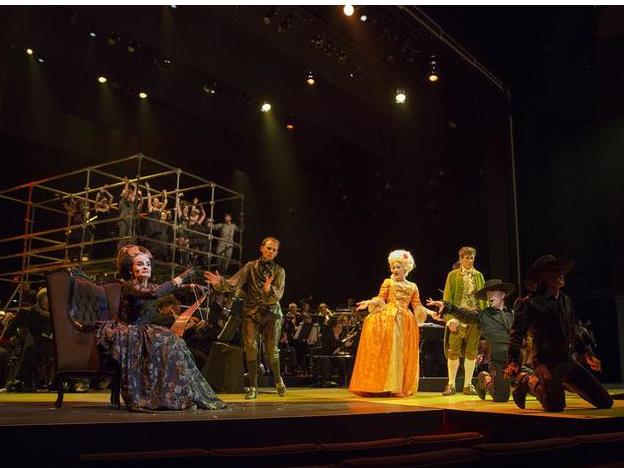 Suddenly, an outbreak of exciting, dangerous and possibly even political-with-a-small-p theatre seems to have broken out in Brisbane.

At QTC’s Bille Brown Studio, Wesley Enoch’s new production of Happy Days with Carol Burns as Winnie, is a textbook presentation of this. As one of Beckett’s most challenging plays, the production honours all of the playwright’s detailed instructions while simultaneously creating a delightful and painfully true evocation of a sad, aspirational woman who can never see the whole picture, and the sad state of Australian cultural life.

Meantime, over at the Playhouse, OperaQ gives us Lindy Hume’s exotic, wildly frivolous production of Leonard Bernstein’s opera, Candide. I say ‘opera’ because that was my understanding of Bernstein’s intention, and indeed I was fortunate to see Scottish Opera’s 1994 production, under the musical direction of Bernstein’s protégé, John Mauceri.

Bernstein, however, also wrote musical theatre – for example the score of the movie musical On The Town (1944), and the Broadway musical West Side Story (1957). Hulme and her collaborator, conductor Paul Kildea, have taken inspiration from this to make some inspired casting choices and to mix and match the vocal qualities of opera with those of contemporary music theatre. Apart from the slightly annoying, intrusive nature of the amplification upon those voices that don’t actually need it, the result is vibrant, fantastical and exhilarating.

Candide, the hero of the piece, is played and sung with a gentle naïveté by David Hobson, the bright sweetness of his voice a delicious contrast to the thrilling soprano of Amelia Farrugia (Cunegonde). She takes great delight in her transition from innocence to sophistication and finally, the acceptance of her fate. Brian Probets brings his rich comic energy to the roles of the narrator, and of Professor Pangloss, the philosopher teacher whose endless misguided optimism (‘everything is always for the best, in this, the best of all possible worlds’) is the source of much of Candide’s problems. He handles the patter songs with great dexterity and fabulous clarity.

The Old Lady with the unpronounceable name and only one buttock is performed by Christine Johnston. Also famous on the comedy circuit as one of the Kransky Sisters, Johnston has an extraordinarily versatile voice, and her iconic playing of the saw accompanied by the Queensland Symphony Orchestra is one of many strokes of comic genius that occur throughout this production.

Bradley Daley sings the roles of Vanderdendur, the Governor, and the dastardly people smuggler, another bravura performance both vocally and comedically. Other roles are undertaken by members of the Opera Chorus Ensemble, and the obvious joy with which they romp and gloat and dance and sing as the backdrop to the story and as Candide’s companions is deliciously palpable.

The Queensland Symphony Orchestra is on the stage, rather than under it, with maestro Kildea channeling Bernstein on the podium, as entertaining as anything else on view. The music simply sparkles and shimmers throughout, from the joke filled opening to the painfully redemptive final anthem. The set design (Bill Haycock, lit by Andrew Meadows) comprises a scaffolding tower and the occasional cut out tree that flies in and out to represent the flora of whatever part of the world we are now passing through. There is just enough room for the performers to establish a sense of place, and to allow the audience intimate access to the characters’ relationships and dilemmas.

Who would have thought, in a time of uncertainty of arts funding and potential political interference, that two major production houses would present work that exposes and challenges the very nature of the current cultural, moral, philosophical and political environment?

That is not to say that the producers actually intended their work to do so, blatantly or otherwise. It simply demonstrates that great art will always allow audiences to imagine and to dream, to examine their own inner philosophical landscapes and possibly find them wanting. Shutting down one sector of the arts industry will not silence dissent. It merely inspires it to shift its focus, and the audience-consumers of art will always interpret in the light of their own experience.

Flloyd Kennedy is an Australian actor, writer, director, voice and acting coach. She was founding artistic director of Golden Age Theatre (Glasgow), and has published critiques of performance for The Stage & Television Today, The Herald, The Scotsman, The Daily Record and Paisley Gazette. Since returning to Brisbane she works with independent theatre and film companies, and has also lectured in voice at QUT, Uni of Otago (Dunedin NZ), Rutgers (NJ) and ASU (Phoenix AZ). Flloyd's private practice is Being in Voice, and she is artistic director of Thunder's Mouth Theatre. She blogs about all things voice and theatre at http://being-in-voice.com/flloyds-blog/ and http://criticalmassblog.net/2012.