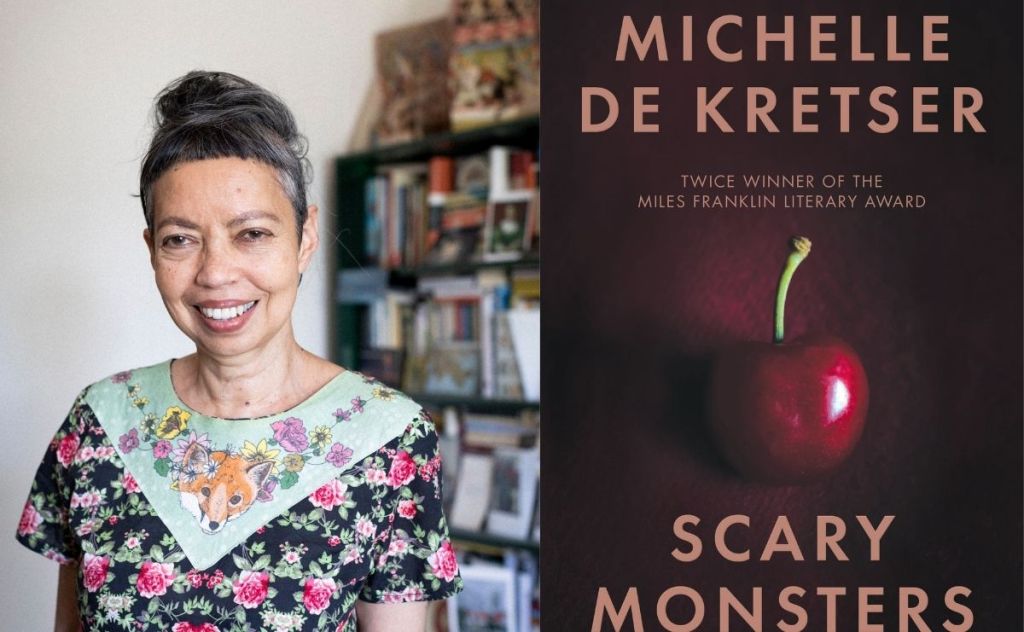 Michelle de Kretser’s sixth novel, Scary Monsters, divides itself down the middle with an unconventional double-front-cover. One side of the book belongs to Lili, and the other side to Lyle. Their two stories are distinctly standalone, yet thematically conjoined. Whichever way around the book is read, the reader will begin their journey with two quotes; one is a statement, and the other a question. Lili’s side of the book will lead the reader to a semi-historical French adventure, and Lyle’s to a post-pandemic Australian future.

Lili is a 22-year-old immigrant living in 1980s France, whose world centres around her friends, Minna and Nick, in a tense dynamic; symbolically reminiscent of Simone de Beauvoir’s 1943 work, L’Invitee. Lili encounters figurative and literal monsters in the world and the people around her as she strives to become a bold, intelligent woman, like de Beauvoir. The reader is prompted to reflect that one is not born with personality intact, but rather becomes the person they are. More literary historiography than typical historical fiction, this story exposes different ways of seeing (John Berger style), and expresses a conscious urge to create oneself, a la de Beauvoir.

Lyle’s story, on the other hand, feels eerily premonitory, and is set against a semi-dystopian Australia ravaged by bushfires, intolerance, and unself-conscious capitalism. This is a world in which human beings are named after brands, and bureaucracy takes centre stage in absurd Camusian form. Truth refusal and fractured identities highlight vapour trails of mundanity, in colours Hannah Arendt would undoubtedly detest. Lyle’s story reveals a hypocrisy so deep it might actually be a kind of irony. In this disturbingly familiar future, the elderly are othered and condemned for existing as non-contributors in de Kretser’s Kafkaesque landscape. The reader might ponder which qualities inherently encompass the utility of a person, and decide what a human life is worth. After all, what is human agency, compared with potential profit? What role does complicity play in justice? And why should anyone care?

Scary Monsters is an account of vulnerability, exploitation, alienation, and the construction of meaning from context. Using the dichotomies of fear/humour, light/dark, past/future, male/female, de Kretser subtextually explores the Beauvoirian concept of self and other, as well as Camus’ absurdity, both of which underlie these two distinct tales of subjective experience. Displacement, disorientation, and destruction are evident in de Kretser’s societal portrayal. She highlights the oppression of individuals and groups for the (ultimately arbitrary) reasons of race, gender, age, class, and other forms of weaponised difference, demonstrating the absurdity of life and history, without alleviating the awkward horror of unabridged human behaviour.

De Kretser, twice winner of the Miles Franklin Literary Award, writes with skilful emphasis on location and interpersonal observation. Her descriptions are ripe with sensory details, and her words hold the enviable weight of existential complexity. Like de Beauvior, de Kretser writes of situations teeming with ambiguity. Alongside overt allusions to David Bowie, courtesy of the titular album, other relevant artists and thinkers appear in the book’s silent soundtrack. Every reference is intentional. Just as Marxism and Existentialism experience instances of overlap, so too, do de Kretser’s stories and the works they self-reflexively reference.

Scary Monsters will resonate most with humans who enjoy a well-told-tale, especially post-modern feminists with a penchant for literary intertextuality.