Captain Sarcasmo digs deep into the murky world of big tobacco and the future of smoking.
Dr Diana Carroll 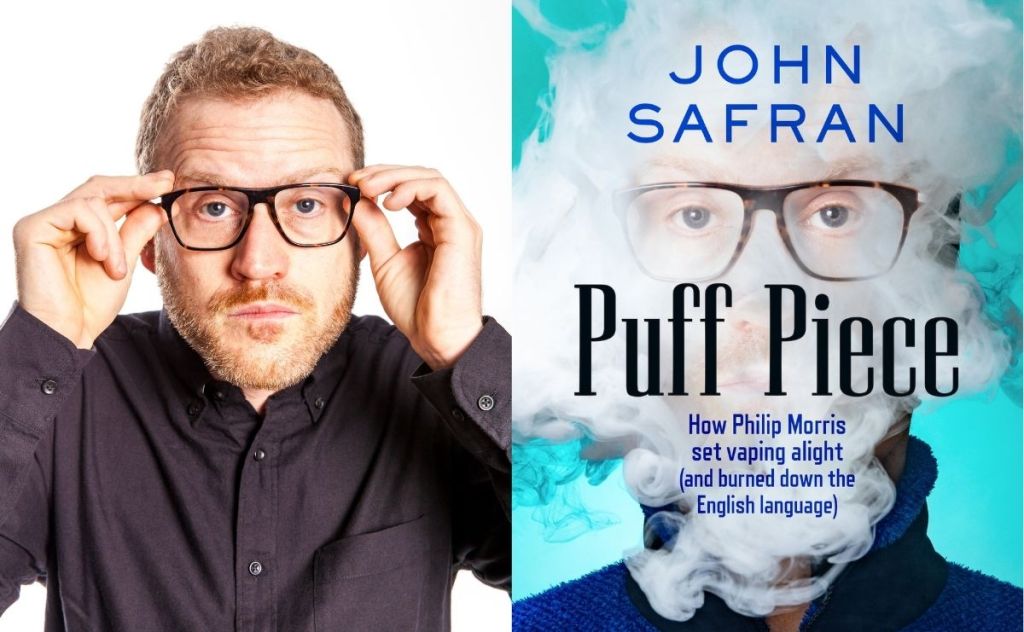 John Safran’s book is ‘More than a treatise on the future of smoking, this is a piercing look at corporate-speak and how nothing means what it appears to mean.’ Picture from Penguin Random House.

John Safran is certainly well-known to Australian audiences for his film and television work and his two previous books: Murder in Mississippi and Depends What You Mean by Extremist.

Never one to shy away from a tricky topic, Safran takes on big tobacco (in general) and the international behemoth Philip Morris (in particular) in his latest book, cunningly entitled Puff Piece.

And there’s a clue to his general theme in the book’s subtitle: ‘How Philip Morris set vaping alight (and burned down the English language)’.

You’ll have to read the book to fully understand the importance of ‘burning down the language’ but suffice to say that Safran loves words and takes them very seriously. He is not just a writer, journalist, and broadcaster who lives by words – he’s also a competitive Scrabble player and a collector of Scrabble dictionaries. So despite his Captain Sarcasmo demeanour, he is someone to whom the language really matters.

And that’s at the heart of this fascinating book about the future of smoking because for Philip Morris, and others like them, the language makes all the difference. In a world where smoking is becoming ever more unfashionable and unaffordable, there are now a few alternatives, including vaping and the Philip Morris IQOS (apparently pronounced ‘eye-kose’) Heat Stick. It’s a cigarette that isn’t a cigarette at all, or so they say.

More than a treatise on the future of smoking, this is a piercing look at corporate-speak and how nothing means what it appears to mean. Anyone studying corporate marketing and communications should read this from cover to cover for its revelations of the layers of obfuscation that are so skilfully applied to the messaging.

Safran tries to pin down some hard facts: what’s legal and what’s not; what’s considered smoking and what’s not; and importantly what is dangerous (or more dangerous…) and what’s not. He rapidly discovers that these seemingly clear questions have far from clear answers.

Some of Safran’s revelations are almost unbelievable. For example, a body called ‘The Foundation for a Smoke-Free World’ sounds all very noble, until Safran reveals that it is 100 percent funded by Philip Morris, the world’s biggest tobacco company and party to the deaths from smoking of some eight million people globally every year. But as Safran so astutely observes, ‘one death is a tragedy, a million deaths (or eight million…) is a statistic’. He even suggests that Philip Morris orchestrated the Australian Government’s Senate Enquiry into smoking, known as ‘Tobacco Harm Reduction’ in government-speak. Can that really be true? It certainly sounds so when Safran tells the story. Sir Humphrey Appleby would have been proud to come up with that one in Yes Minister.

It is clear that Safran has researched his topic obsessively from a range of sources from government and scientific reports to personal interviews. He buys shares in Philip Morris just so he can ask difficult questions at their Annual General Meeting. And he makes friends with the vaping community in Australia and New Zealand, largely the domain of smaller family-run businesses, to understand their rather precarious place in the new post-smoking world. Importantly, Safran highlights the glaring hypocrisy of a government that allows big tobacco while vaping remains clouded in legal uncertainty here in Australia despite the endorsement of the NHS in the UK that acknowledges vaping is far less harmful than smoking.

That John Safran is a professional contrarian is no surprise to anyone who knows his work and Puff Piece continues the great tradition of stirring the pot. There is a lot to admire in this book but Safran’s madcap pace and high-octane writing can be a bit wearying. It all becomes a bit much after the first 200-odd pages. A little more focus and a rigorous editor with a big stick would be a relief to the exhausted reader. Nonetheless, this is an entertaining and important book and highly recommended.