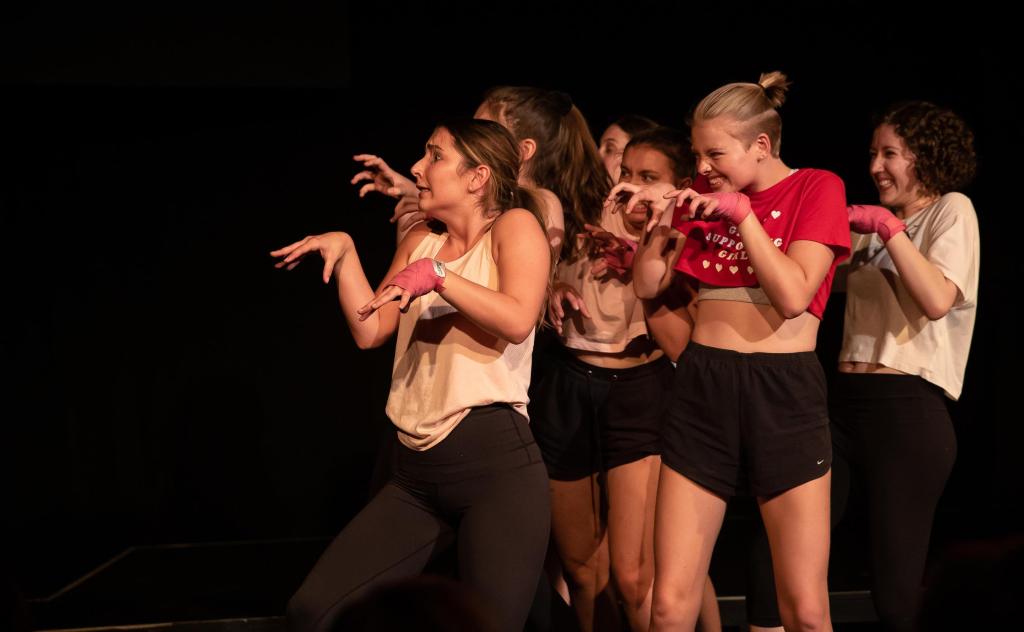 WA Youth Theatre Company’s diverse performers have collaborated to present four distinct and personal short works. With consistently smooth ensembles, each work clearly integrates the talents and interests of its young cast members, but beyond that the similarities fall away. Utilising two rooms at Fringe World’s Girls School venue, the Art Deco-inspired classic building itself plays a role as audience groups cross paths, passing the hundreds of lockers left from decades as a police licensing centre.

The Art Room hosts two unique, participatory pieces, Adrian’s Soul and ARCO. Inspired by the work of British artist Adrian Howells, director James Berlyn gently introduces company and audience members to the interactive performance experience in Adrian’s Soul, exploring the nature of interactions with strangers. Each guest is invited to shake hands, high-five, hug or pass by at each landing up the broad staircase, respecting individual comfort. With a loose and unconventional seating layout, the large cast uses the entire space. Stories shared with the room are punctuated by the cast’s physical responses before each participant is paired off into surprisingly intimate direct conversation with a single performer, provided with options on levels of engagement.

A change of seating leads into ARCO’s solo presentation, devised between Berlyn and performer Adam Kelly. Sharing his perspective as an ‘autistic gentleman’, Kelly’s disarmingly direct discussion is informative and entertaining. With good-humoured and well-timed physical demonstrations, Kelly overcomes social confusion and devastating, repeated rejections and exclusions with his irrepressible innate optimism. Kelly literally breaks out of the space and onto the columned balcony behind his stage, inviting the audience to join him in a celebration of triumphant optimism and the value of all bodies.

Will and Boxed In take turns on the Cookery Room’s black box stage. An all-male ensemble raises questions about who controls decisions about adolescent bodies in Will. A narrative told through others’ thoughts and texts, 11-year-old Will’s love of singing and natural talent are discovered through a viral video. Embraced by the classical musical community, Will expands his repertoire. The cast use simple and natural performance styles to portray rising Insta-accolades, an impressed classical music expert, parents enjoying extra income, an earnest school friend, a disillusioned pub band singer and Will’s cynical older brother. But the eponymous Will is left without a voice on stage, his silence contrasting with the cacophony of opinions and descriptions of his practice. His desire to retain his boy soprano range leads to Will’s parents asserting authority alongside loud opinions from myriad other parties, before an ambiguous end that leaves audience members to their own thoughts.

In Boxed In, an all-female collaboration led by director Phoebe Sullivan and assistant director Rebecca Riggs-Bennett shares stories of societal expectations around young women’s bodies. Set in a group boxing class, vigorous displays of explosive physical power contrast with tales of self-consciousness, discomfort, reproach and harassment. While acknowledging the very real and physical fears that women face, Boxed In concludes with a subtle message of strength and resilience.

Developing audiences as well as the artists, the four works in Body Rights cover intriguing topics in original ways. Each stands alone, but all benefit from the design ingenuity working around and embracing the limitations of the specific spaces, with Rebecca Riggs-Bennett (Adrian’s Soul and Boxed In) and Tristan Parr (Adrian’s Soul, ARCO and Will) weaving creative sound and supportive musical interludes. Parr brings subtle clues and expanded dimensions to Will, using music inspiring the character, such as On Broadway by Jimmy Scott, in an example of the consistently exquisite crafting and detail. Peter Young demonstrates versatility and sensitivity in his lighting design for each performance, and stage manager Anastasia Julien-Martial makes the most of specific spaces not easily adapted for theatre. Assistant directors Georgia Ivers (Adrian’s Soul), Hannah Davidson (ARCO) and Amelia Burke (Will) bring out the potential in the many developing artists. The performers themselves impress with their assured approaches to diverse styles, promising future personal and artistic growth and achievements.

With four distinct performances providing something for any audience, possible preconceptions about limitations of skills and subtlety in local youth theatre fall away in the process. A thoughtful part of the 2020 Fringe World program, WAYTCo yet again pushes performance and thematic boundaries through providing outlets for authentic young voices.

Presented as part of Fringe World 2020