SYDNEY FESTIVAL: A must-see, Beautiful Burnout is is a funny, honest and moving exploration of boxing culture that will appeal both to fans and haters of the sport.
Ildiko Susany
[This is archived content and may not display in the originally intended format.] 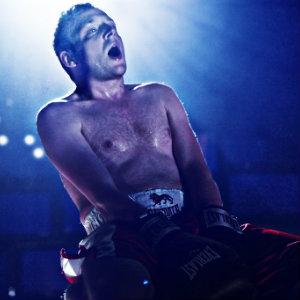 Beautiful Burnout goes to the heart of boxing – the glory, the passion, the power, the hunger, the pain and the pay-off. The production, co-presented by Frantic Assembly and National Theatre of Scotland, is the result of time spent researching boxing gyms around Glasgow and Edinburgh, to discern the “truths” that underlie the “blood sport”.

Following the lives of a group of young wannabe boxers at a local boxing gym in Glasgow, we get to know and understand the drive, dedication and challenges that fledging boxers face in order to achieve their dream. Some make it. Some don’t. Some learn of discipline and respect; others learn life’s lessons the harder way. In the end, we learn what it means to box – to have a dream and to go for it no matter the cost (and sometimes, the cost is dear).

The production harbours a fabulously Scottish flavour and energy, and while a play set within the boxing culture of working class Scotland may not seem appetising for a wide audience, the show is immersive and alluring; universal in its themes and insights, it’s striking for not only those who love and understand boxing but for those who detest it as well.

Set within a boxing ring and sporting an array of television screens as the backdrop, the set twists and turns and unfolds – transforming before your very eyes and churning out surprise after titillating surprise. The dialogue is cheeky, unassuming and revealing, with the gutsy actors matching the exceptional writing with punch and personality. Mixing dramatic performance with rigorous fitness choreography, the actors submit themselves to gruelling and extensive movement sequences, sweating and puffing as the audience sit wide-eyed in their seats, jerking and jolting in sympathetic rhythm. The lighting and sound is integrated perfectly with the production, creating a dynamic, edge-of-your-seat masterpiece that affects the audience to almost dodge the jabs and upper-cuts as the performers do!

Beautiful Burnout is a must-see at this year’s Sydney Festival. It is a funny yet incredibly honest and moving exploration into what is truly at the heart of the boxing culture. You need not be a fan of the sport to love this production! It’s a knockout!

Ildiko Susany is a Sydney based actor and writer. She graduated with Distinction from a Bachelor of Theatre Arts - Acting degree at the University of Southern Queensland in 2008 and has worked across Australia in both theatre and film. Ildiko's work has been shortlisted in Queensland Theatre Company's Young Playwright's Program and has played at the Brisbane Powerhouse for the 2high Festival. Ildiko is a proud member of MEAA.