Asking For It: A One-Lady Rape About Comedy, Starring Her Pussy and Little Else!

If you haven’t seen this show already, you should.
Brooke Boland 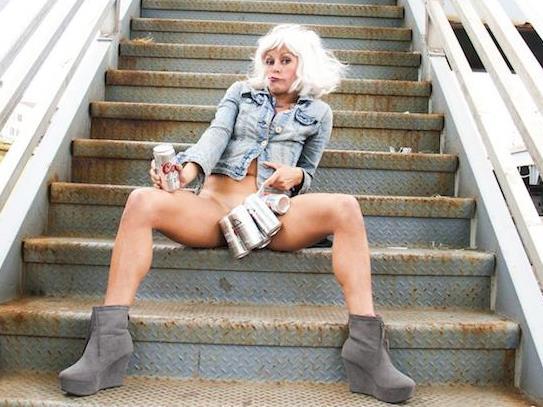 Adrienne Truscott dances onto the stage at the Howler in Brunswick. She is wearing nothing but platform shoes, a platinum blonde wig and a denim jacket. ‘Thank-you for coming – I bet you didn’t expect to hear that at a show about rape!’ Truscott jokes as she opens her show.  Her high energy and unbroken banter sets the tone for another successful rendition of Asking For It: A One-Lady Rape About Comedy, Starring Her Pussy and Little Else!

Truscott performs most of the stand-up routine naked from the waste down, an effective costume choice for this comedy show that has a sharp political edge. ‘Am I asking for it’? she jibes, as she drinks her gin and tonic and performs a few more dance moves before moving into the audience. ‘You all look terrified,’ she laughs.

Known for its risqué nature and confronting subject matter, Asking For It won both the Malcolm Hardee Award and Foster’s Edinburgh Comedy panel prize, and was nominated for the Total Theatre Award in 2013. If you haven’t seen this show already, you should.

At times Truscott directs her sarcastic criticism toward the very medium she works in, condemning the type of misogynist rape comedy often explored by other comedians, epitomised by the Daniel Tosh incident in the United States when the comedian responded to a female heckler saying, ‘Wouldn’t it be funny if that girl got raped by, like, five guys right now?’

Truscott redirects the comedic form to include the very propagators who incite laughs by ridiculing victims of rape, referring to this as ‘lazy’ comedy. This is a distinction that her show clearly makes: there is a difference between humour that challenges rape and humour that perpetuates it.

Subverting the gender stereotypes and ​rhetoric associated with rape, Truscott challenges a culture that constantly lays blame at the victim’s feet.

Truscott’s show is a nuanced comedy that audiences can enjoy for the many laughs it elicits and the challenge it poses for comedy, and society, to do better.

Asking For It: A One-Lady Rape About Comedy, Starring Her Pussy and Little Else!​
by Adrienne Truscott
The Howler, Brunswick