Ghostly figures made of shoes and motorcycle helmets charge at viewers in a installation that takes a look at the contemporary mob and truth of the protest.
Gina Fairley
[This is archived content and may not display in the originally intended format.] 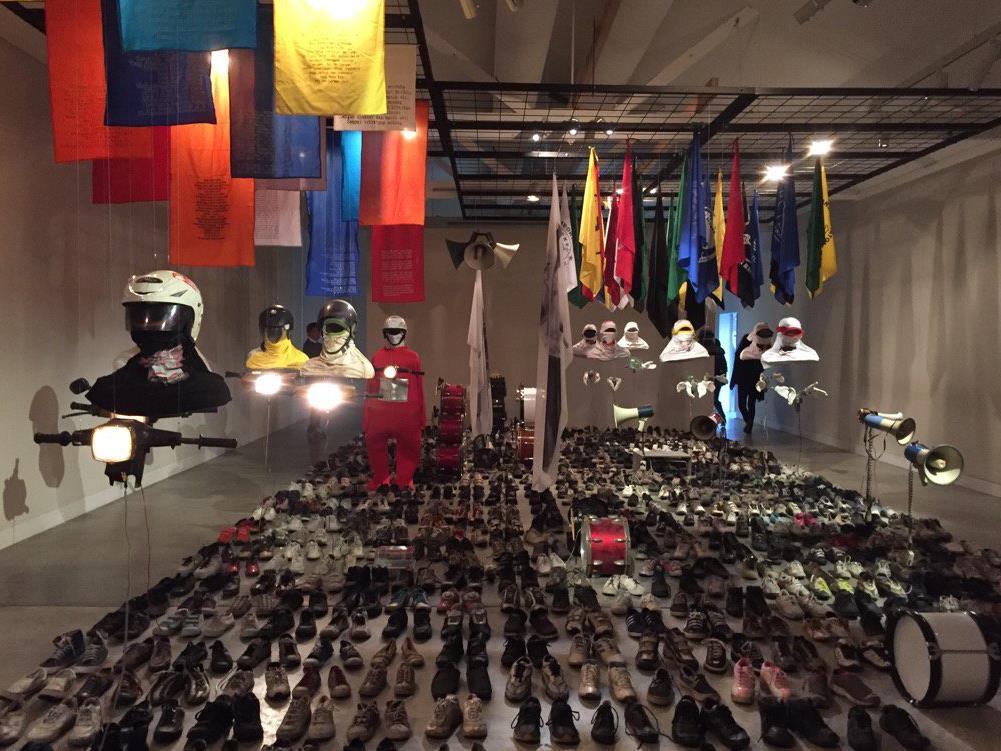 I first recall seeing one of Jompet Kuswidananto’s installations at the 2009 Jakarta Biennale, in Indonesia’s capital. What I didn’t realize then was that piece, Java: the War of Ghost (2008-09) was the first pivotal work in his celebrated Java’s Machine: Phantasmagoria series, and arguably tracks right through to this new installation at Sherman Contemporary Art Foundation (SCAF).

In it, fragments of royal army costumes were presented in regimented lines, their kinetic movements drumming in staccatoed gestures, backdropped by a silent film from an industrial age. It was mesmerising in the slightly mouldy colonial architecture – history was seemingly palpable.

While After Voices (2016) does take a thematic departure from that genesis – historic military costumes have been replaced by the dress of everyday protestors; the beat of a sentry drum with the rat-tat-tat of gun fire and frenzy of motocycles – the framework remains largely the same.

You are seemingly facing a mob moving at full speed in your direction.

It is a sensory overload. Colour, light, kinetic play, film, sound. There is little space to move in this chaos, or hysteria as curator Alia Swastika prefers to call it.

While Jompet’s earlier Phantasmagoria installations were staged with a celebratory pomp, this installation has an abrasive urban edge. The ghostly figures are less nostalgic and poetic; their contemporary costume alone posits the viewer within this urgency, and it is demanding.

The slogans on the t-shirts and flags all differ, messages vying – so many opinions, each so vocal and immediate. It is an interesting coincidence that this installation opened the week of our own national election, and the kind of hysteria that surrounds the contemporary bid for power.

It is this very internal noise that is the great departure in this work for Jompet, this structure of the random rant – protestors ‘on autopilot’ as Swastika adds.

Jompet explained in the catalogue: ‘After eighteen years of democracy, Indonesians are well trained in expressing and performing their political views. I think over these years Indonesia has been at the first stage of democracy, which provides a platform for political voices. But the Indonesian soundscape has degenerated into a cacophony where a voice has been devalued into a meaningless noise, and I think it’s important to distance oneself from that cacophony. Not voicing things as black and white is one way to open a deeper discussion and keep the quality of the voice.’

But does Jompet offer a way to cut though the volume? I am not convinced he does.

One can hardly be disappointed by this exhibition. It ticks all the boxes we expect and want of the artist – and more blatantly, an Indonesian artist – and Swastika’s deep knowledge of Jompet’s work and long friendship has ensured that this latest edition is totally on point.

I feel, however, there is a ‘but’ in my words. I struggle to find what that ‘but’ is; perhaps it is just that the work has moved little outside of this frontal, sensory, ghost formula over the past eight years since that Jakarta debut.

The nuances of this piece, however, are very different and to overlook them I would be doing this installation a disservice. We need to step back a little to fully understand the installation.

Born in Yogyakarta (Indonesia) in 1976, Jompet is typical of a generation of artists who witnessed firsthand and engaged with the protest movements of the 1990s that changed Indonesia’s social and political landscape. He studied at Indonesia’s oldest university, Gadjah Mada, which played a vital role in the early days of the Republic. Memory is inseparable from the student mob.

Jompet explains: ‘After Voices does not refer to one particular moment or event in time. Instead, it displays fragments of incomplete memories and different interpretations of historical events … [and how] ‘ordinary’ crowds function differently from those which operated during President Suharto’s 1966 New Order.

‘Propaganda methods have changed with the development of new technologies that distribute new ideas through social media and other platforms … The dynamics of mass movements have changed,’ he continued.

This is perhaps best played out in the film that is projected low on the wall at the rear of the installation. It is not immediately obvious what is going on, but it is the cornerstone of this installation in many ways.

It is a video re-enactment of a historical event that has been manipulated to glorify Suharto. That event was a major military offensive staged against Dutch troops on 1 March 1949. It is retold endlessly through annual re-enactments by regular punters, many of which are posted today on social media.

It was this very myth making and evolution of a narrative that interested Jompet, and through it, raised questions about a kind of loss of trauma.

We are left asking how reliant is the public account of history? We have been conditioned to question written histories for their political tint, but with social media turning us all witness to the mass protest, the need to filter has been punched into steroid proportions.

Swastika writes: ‘Monuments, myths and narratives were invented to reconstruct collective memory, robbing citizens of their potential to critically understand history. Jompet’s re-enactment reveals how the film’s subjects are able to see the event in a looser and more relaxed way: there is clearly a gap in the rigid notion of truth.’

At the end of the day we don’t have to be Indonesian to read this scene or to ascertain its truth. For Jompet it is a kind of wrestle with the tensions of social control and the complexity of mass psychology.

We have been conditioned to read mobs and hysteria by turning on the television every night. The flags and megaphones are global symbols of protest. We know the vocabulary of protest, regardless of whether we listen or not.

The words ‘trauma’ and ‘hysteria’ are used loosely and interchangeable in the catalogue essay, attempting to navigate their contemporary resonance. We largely live in a blanket of amnesia today, where information flows across us at great volumes and little is retained. For this reason, I don’t think this installation delivers that level of trauma its rhetoric suggests.

Is that response purely subjective given that I don’t hold those triggers for trauma in my own memories? And does that matter for a strong installation? I don’t think so.

After Voices washes over you with great impact and energy; it is impressive, sensory, engaging and questioning. Who did all those shoes belong to? It’s visually sticky… heck, it’s entertaining! It opens the viewer to a new world and a fresh engagement, and the ‘take away’ for each viewer will be as different as the opinions in a swelling mob.