A Behanding in Spokane 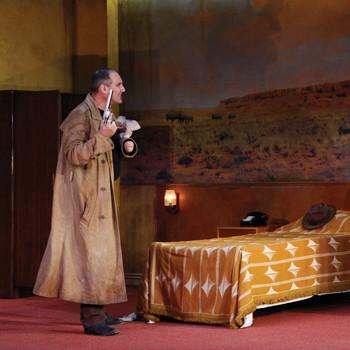 Best known for his magnificent, melancholy and blackly comic feature film In Bruges, and a series of plays which gleefully invert the clichés of the Irish character, A Behanding in Spokane is Anglo-Irish playwright Martin McDonagh’s first new theatre script in 15 years.

Unlike the two trilogies on which his early reputation was based (including The Lonesome West and The Beauty Queen of Leenane), set on Ireland’s rural west coast and written in a white-hot creative frenzy in 1994, A Behanding in Spokane takes place in the United States, and seizes on the familiar tropes of that all-American film genre, the Western – including bloody vengeance, vigilantism, and the quest for justice – in order to tell its tale.

In a shabby, run-down hotel room partially illuminated by the ruddy glow of a neon sign, we meet the hulking Carmichael (Colin Moody), a one-handed racist whose obsessive quest to find missing his left hand, severed and stolen by a gang of hillbillies, has carried him “across this sad, decaying nation” for almost 30 years.

Carmichael has come to meet a young couple, white trash Marilyn (Nicole da Silva) and African-American grifter Toby (Bert LaBonté) who claim to have his hand for sale. Also present is the strange and sardonic Mervyn (Tyler Coppin), a lonely hotel clerk who expounds upon his curious outlook on life in a rambling and imaginative monologue about lesbians, monkeys, and high school massacres that somewhat awkwardly occupies the play’s middle third.

What unfolds between these four characters on Christina Smith’s perfectly realised set provoked laughter, shocked gasps and some genuine surprises on the production’s opening night.

This pitch black comedy is not for the easily offended, with McDonagh’s expletive-laden script featuring enough racial epithets to shock even a Cronulla rioter, and an abundance of grand guignol humour. But for those with the stomach for the playwright’s playfully warped view of the world – typified by a speech late in the piece in which Carmichael screams down the phone at his equally racist mother in order to re-establish his white supremacist credentials – there is much to enjoy.

What the Other Critics Say

Crikey: “It won’t be everyone’s cup of tea … it’s about as far removed from a David Williamson play as you’ll get.”

The Age: “But the dialogue is snappy (if you can stomach the excess of filthy language), and the increasingly ludicrous plot generates a fairly constant stream of giggles.”