Inspiring, breathtaking, and moving – jazz at its finest and most diverse.
Katie Lavers 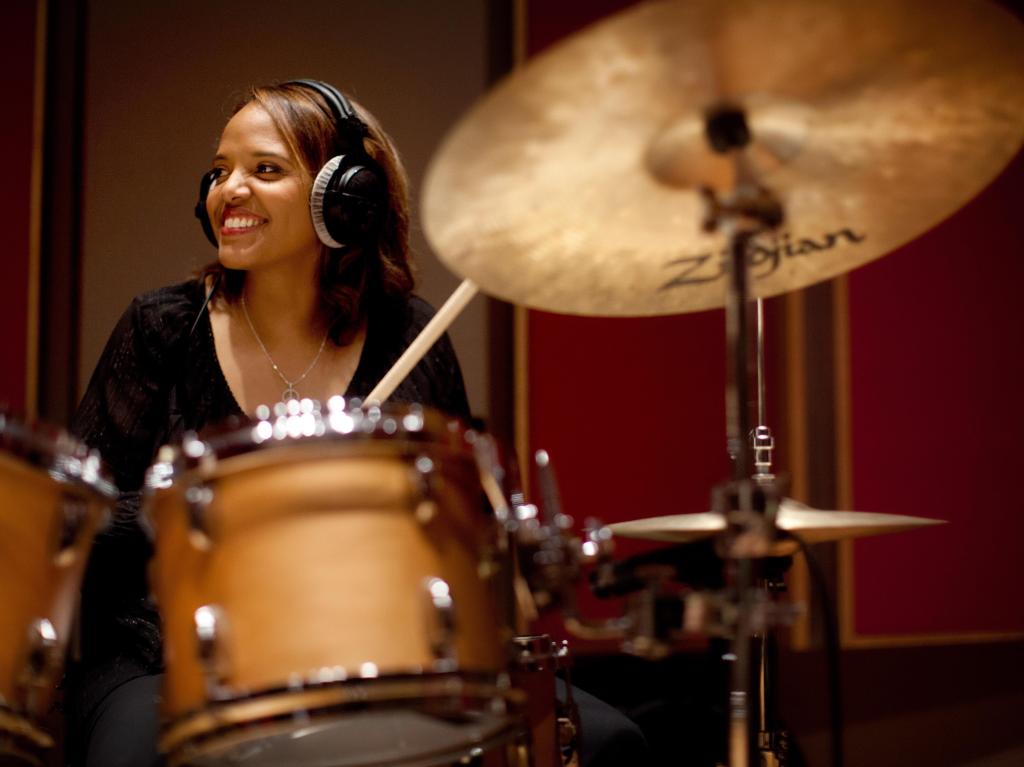 The range of work presented at the 2017 Sydney International Women’s Jazz Festival blew away any staid or conservative definitions of what ‘jazz’ is. This year’s festival broke down boundaries and created an absorbing, inclusive program of jazz at its most inspiring, breathtaking and moving.

The 2017 program from artistic directors, Zoe Hauptmann and Peter Rechniewski, is an extraordinary indication of the range, diversity and excellence in the jazz being played by women nationally and internationally.

Of the four international women jazz artists brought in to Sydney to headline the 2017 festival – Nadje Noordhuis, Jen Shyu, Terri Lyne Carrington and Silke Eberhard – each presented a very particular and different notion of jazz. And it’s these widely divergent ideas and approaches that gave this festival its own stimulating and inspiring ethos.

Nadje Noordhuis, a trumpet player, opened the festival with an evening of music performed with James Shipp (vibraphone). Her music explored long horizontal sweeps of sound that were evocative and cinematic in feel. The playing was understated (and could be described as almost anti-virtuoso) focusing on meditative sounds inviting in stillness, reflection and breath.

Jen Shyu, a multi-award winning artist and composer, presented a work called ‘Song of Silver Geese’ which focused on the themes of life and death, loss and grief. While it’s almost impossible to categorize this performance which moves effortlessly between musical styles and cultural traditions, Shyu herself describes her work as jazz, saying it stems from and is informed by an immersion in jazz artists and jazz music.

The music was linked together by found sounds including the recording of the last telephone call of friends who had been killed in a car accident. The sounds of their recorded voices acted as a sonic starting point leading into an extraordinary diverse range of music and musical traditions. Working with top musicians James Shipp (vibraphone), Veronique Serret (violin) and Simon Barker (drums), Shyu herself performed vocals from different traditions, dance,Taiwanese moonlute, piano, Korean gayageum and soribuk, and violin. Her performance included superb choreographed movement sequences and breathtaking Korean drumming.

Her presence, which brings an intensity, precision and virtuosity to the stage, has the energy and startling inventiveness to keep you on the edge of your seat for the entire concert. The performance also proved  profoundly moving, starting with the audience being invited to breathe together and listen to the sound of the breath, and finishing with a moment of focus in which the continuance of breath in the space became the only sound.

Terri Lyne Carrington is internationally acknowledged as one of the finest jazz percussionists in the world. She has played with Herbie Hancock, Wayne Shorter, Esperanza Spalding, Cassandra Wilson, Stan Getz and many others, and in 2013 was the first woman ever to win a Grammy for Best Jazz Instrumental Album. An inspiring legendary musician she currently holds the Chair in Performance at the Berklee Global Jazz Institute.

Terri Lynne Carrington’s drumming is extraordinary, and moves beyond virtuoso into an area of  complex, innovative and  breathtaking rhymic precision and inventiveness.

She played with Australian musicians, saxophonist extraordinaire Sandi Evans, Ben Hauptmann (guitar), Aron Ottignon (piano) and Jonathan Zwartz (bass). A memorable evening of jazz which showcased the talents of all the players to the best possible advantage.

Award winning German saxophonist Silke Eberhard showed dynamic tone, wonderful inventive melodic lines, a vigor and vitality in her playing, and perhaps most importantly in this context an inclusive generosity to the musicians around her. This created an environment for an evening of jazz that displayed not only her own very fine musicianship and improvisational skills but also the extraordinary inventiveness of the Australian musicians playing with her, Andrea Keller (piano) Sandi Evans (saxophone) Steve Elphick (bass) and James Waples (drums) The evening featured compositions by the three women musicians, Silke Eberhard, Andrea Keller and Sandi Evans and this proved an inspired choice as the works were diverse and surprising.

Andrea Keller, the Melbourne based pianist and 2017 Art Music Fund recipient, is an inventive musician whose jazz constantly intrigues with its experimentation into the potential of the piano as an instrument, moving effortlessly between a tightly syncopated percussive approach to playing, to sustained impressionist drifts of lyrical sound.

Sandi Evans, the Sydney based saxophonist, showed herself yet again to be a musician of the highest possible calibre whose high standing both as an improviser and composer is well deserved. Her playing was breathtaking and continues to serve as an inspiration to all female jazz musicians not only in Sydney,  but also throughout Australia and internationally.

Stunning awe-inspiring stimulating jazz of the highest calibre – The Sydney International Women’s Jazz Festival 2017 will be a hard one to top!