A community-focused approach to the arts in Singapore, coupled with unrest in Hong Kong, is shifting the focus of the arts world in our region – which has lasting ramifications for Australia.
Naima Morelli 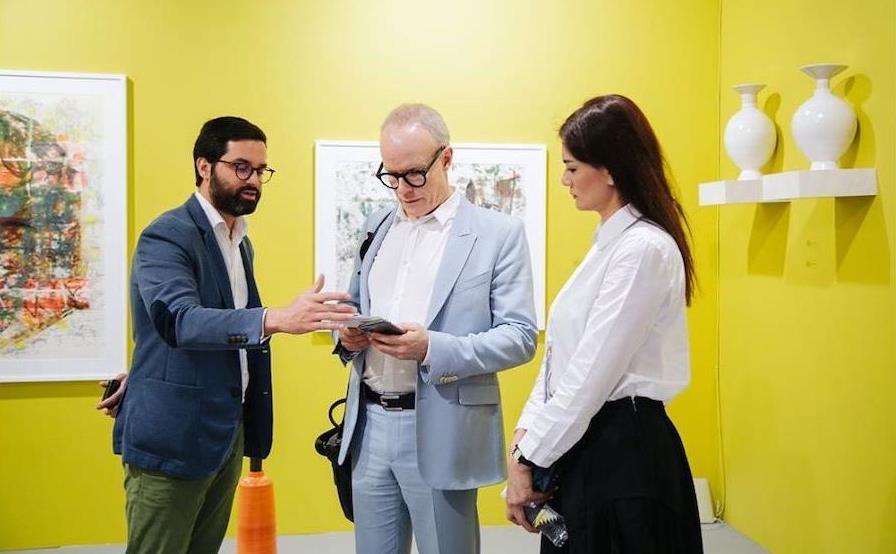 The last decade has seen a fast and significant development of Singapore’s position in the art world of Southeast Asia.

Gauging from the first art events of 2020, we can foresee a shift from a mainly government-led growth and larger-than-life ambition, to a much more sincere community-focused approach.

This happened unexpectedly through what initially looked like a major setback, namely the sudden withdrawal of the art fair Art Stage Singapore in 2019. Born as a supplement to its bigger sister,

ended up taking the centre stage. The new fair proved itself to be close to real heart and aspirations of local and South Asian practitioners, while also fulfilling a gap in the Southeast Asian art market.

‘I think the smaller, more regional approach is refreshing and is positioning Singapore as a place to come to see what is happening in the visual arts in the region,’ said Jan Manton, of the Australian Jan Manton Gallery, who participated in the second edition of S.E.A. Focus.

Indeed, in 2020 S.E.A. Focus became the anchor for Singapore Art Week, the much anticipated January event for practitioners over the past seven years. It has proved to be an excellent opportunity for visitors to engage with Singapore’s art scene, and visit the Singapore Biennale at the same time.

Themes such as sustainability and environment, as well as citizen participation have been core themes for the art exhibitions scattered around the city. Independent and ground-up arts initiatives have popped up in a scenario, which so far, has relied mostly on governmental incentives.

Singapore, Hong Kong and Taipei: enough room for everyone

There is no doubt that the equilibrium in the regions are shifting, especially due to the issues Hong Kong – the hub of the Asian art market – is facing right now, from fighting for freedom of expression, to new forms of censorship for the arts and now the folding of Art Basel Hong Kong due to public health concerns.

While Singapore has historically looked at Hong Kong as a “frenemy” of sorts, today the concern is more on supporting Asia’s larger arts ecosystem, rather than having one city and territory benefiting at the expense of another.

Emi Eu, Project Director of S.E.A. Focus and Executive Director of STPI hopes that the proliferation of activity across the whole of Asia – with regional art fairs, new museum openings, biennales and other major events – will be beneficial for the entire region.

This also included the fair, Taipei Dangdai, which took place in the same period of the Singapore Art Week. Rather than creating collision, the bigger art fair seems to have given international arts lovers an additional reason to stop by Singapore and the region.

‘Taipei is also just a short flight from Singapore, so we anticipated that international visitors – who have already travelled so far – would take the opportunity to visit both Taipei and Singapore, which they did!’ said Eu.

For Low Eng Teong, Deputy Chief Executive from the National Arts Council in Singapore, Hong Kong and Taipei are different markets altogether.  ‘While fairs like Art Basel Hong Kong and Taipei Dangdai cater to markets in the Greater China area, S.E.A. Focus looks to put a spotlight on art from Southeast Asia and beyond,’ he said.

‘S.E.A. Focus was born out of collaboration – to nurture greater appreciation and engagement with art and artists from Southeast Asia,’ Teong continued.

He believes there is room for a diverse range of visual arts experiences, and fairs like Taipei Dangdai and Art Basel Hong Kong have complemented the arts offerings in the region. ‘Such fairs inspire visitors, nurture greater arts appreciation and develop the commercial sector, especially those focused on Southeast Asian art.’

Furthermore, there is another new art fair looming on the horizon – namely ART SG, which will be held at Marina Bay Sands from 30 October to 1 November 2020 – created by the same founders that launched Taipei Dangdai.

In this scenario, one can’t help wonder what Australia’s place is in Singapore’s regional scope.

For many years, Australia and Singapore have enjoyed a strong bilateral relationship across many fronts, and in 2015 the countries two Prime Ministers signed a Comprehensive Strategic Partnership, intensifying cultural cooperation.

A recent example is the five-year partnership from 2017 to 2021 between the Singapore Art Museum (SAM) and the Queensland Art Gallery & Gallery of Modern Art (QAGOMA) for collaborative programming and research and co-curated exhibitions.

‘Australia’s multi-cultural character and relative proximity to Singapore makes it a natural partner for cooperation,’ notes Teong. ‘We share a similar approach and appreciate how culture can strengthen a national identity and serve as a bridge for communities to come together. Our strong ties have enabled us to enjoy the collaborative works between many Australian artists and institutions with Singapore counterparts.’

In terms of the market, Manton said building on the strong links Australia and Singapore have created over the years means there are great opportunities for the arts sectors of both countries to strengthen and expand.

One of the most interesting factors that has come to the forefront in the dawn of the new art decade is a market interest for the region’s young and emerging talent.

Half of the artists in S.E.A. Focus were indeed local and emerging, and by highlighting them Singapore is also taking the audience on a new journey.

Nurturing arts appreciation and offering experiences that cater to people of different background is what the Arts Council has been focusing on in recent years. ‘The diversity and richness of programmes for SAW 2020 signals a vibrant and thriving visual arts ecosystem in Singapore, and there is potential to grow,’ said Teong.

Eu also notes an increasing engagement with established and burgeoning collectors in the region. ‘Mostly we aim at fostering greater appreciation and engagement with art and artists from Southeast Asia. We feel this focus sets us apart and creates a unique experience that visitors will really value and want to return to.’

Naima Morelli is an arts writer with a particular interest in contemporary art from the Asia Pacific region and the emerging art systems. She is a regular contributor to CoBo Social, Culture360 and Middle East Monitor, among others, and the author of a book about contemporary art in Indonesia.