What the arts can learn from Black Lives Matter 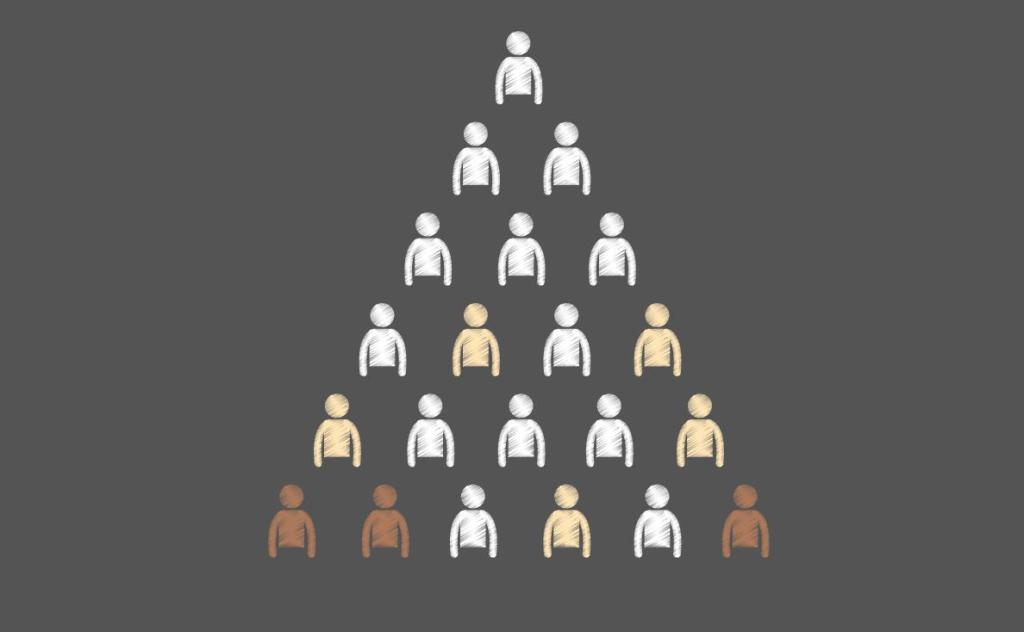 Detail of The We Value Inclusion and Diversity Corporate Structure…if it looks like this you are doing it wrong, digital drawing by Travis De Vries.

We have serious systemic racism issues in the arts industry in Australia.

In the recent past there has been a huge focus on having more First Nations’ art available for audiences, which is great, it should be our most cherished work. It is the most substantial part of Australia’s history and culture.

Until change on a structural level happens this isn’t enough.

Last year I made an artwork that was basically a very simplified organisational chart. It showed a pyramid of people. The lowest layer had people who were white, tan & brown in colour. The next layer up had a few less brown people and the layer up fewer again. At the top two to three layers of the chart all of the people were white.

I made the work after reading a statement from an arts company that said: “We value Diversity, Inclusion and Intersectionality at xxxxxx, we make it a core part of our business to do business with that in mind”. This artwork hit home for a lot of people. Why? Because we continuously see organisations making these statements yet not following through with any major changes in hiring practices particularly at the top level of the organisation. Organisations are not walking the talk and are using diversity as a marketing strategy.

You’ll often see the faces of BIPoC (Black, Indigenous and People of Colour) people servicing the arts and entertainment in entry-level production roles, as cleaners, wait staff or as front of house or in middle management positions with a focus of their job being community liaison. It’s incredibly few and far between that you see them at the head role of the organisation, or in a position where they control hiring or key financial decisions.

In artistic leadership positions we’ve seen Wesley Enoch as the Artistic Director of Sydney Festival and Brooke Andrews taking on the role of Artistic Director of the Biennale. Unfortunately Andrew’s NIRIN was scaled back due to COVID so we can’t see how amazing it would have been. How many other major festivals have we seen with some colour at the top? Wesley’s run as artistic director will soon be over and we’ll see Olivia Ansell coming in. I hope that Ansell’s program sees as much diversity as Enoch’s although I worry that Wesley was an aberrant three-year blip in what will be the history of the festival. First Nations (and other BIPoC) led takeovers of mainstream arts needs to happen.

I worked as a program assistant and then a producer for the Sydney Opera House between 2013 and 2018. During that time I was assigned (not asked) to be a part of the Opera House’s Reconciliation Action Plan working group. Whilst having a RAP is an achievement in and of itself and you can view the steps forward the Opera House has made with their RAP related projects (on their website, they will tell you all of the successes they’ve made in this space) I can’t feel like anything of meaning has been achieved when the executive end of the Opera House corporate structure doesn’t have any additional diversity. The people in charge of hiring don’t have any diversity. There is one BIPoC Head of Programming Stream out of the six programming streams: Rhoda Roberts. There is one BIPoC on the Opera House board: Deborah Mailman.

The unspoken idea that BIPoC and particularly Indigenous peoples have to work on and create art that focuses on Indigenous issues is one that particularly annoys me. Whilst working at the Opera House I applied three times for producer roles in the contemporary music team and ended up being successful when I applied for the First Nations producer role working with Rhoda. This showed where the organisation wanted my skills to be applied. As an organisation they signalled that their preference was for the blackfella to work on blackfella work.

Why do we as an industry continue to push BIPoC to only work on productions that have a BIPoC focus? Why are white people celebrated or viewed as white saviours for working on diverse productions, when a BIPoC person wants to work on a mainstream contemporary music program they are too often relegated to an entry level or mentee position or are all but turned away?

Even this publication is not without a need to learn and make change in this area. I was contacted via Twitter to potentially write an article about ‘protests and the recent toppling of statues’. When I expressed interest and we followed up the conversation over email the editor asked me rather if I would be interested in writing something substantial about art engaging with Deaths in Custody’. To be fair I was contacted after being recommended by another First Nations writer and ArtsHub is forthright about their need to do better in this space.

I am not particularly interested in writing about Deaths in Custody purely because it’s an issue that for me would come with heavy emotional baggage and it would be too hard to put myself through that. Whilst this is somewhat of a cop out, it’s been a long month (that feels like a year) of seeing an incredible groundswell of people-power in the form of the Black Lives Matter protests both here and all over the world followed by an almost complete backlash of negativity from governments and general population on social media and conversations in the street. I couldn’t write about Deaths in Custody because I can’t bring myself to focus on that, to think about that trauma on top of everything else.

When I (or another similar person) as a First Nations writer am approached and asked to write a review or an opinion piece about Opera Australia or a visiting international white superstar, or when we celebrate a First Nations artist for making art about something as ubiquitous as cats without a need for them to teach us something about the black experience, that’s when we will know that the change that needs to happen in this industry is finally getting done.

Due to the Black Lives Matter movement and protests lots of companies across the world are pledging to increase their employment quotas of Black and First Nations people. A board member from Reddit who was one of the co-founders recently quit his position on the board stipulating that it should go to a black man or woman.

General employment and board representation is great, what we also need to see is executives of colour as well. At the moment the people that benefit the most from First Nations cultural assets are not First Nations people.

Arts organisations in this country can be better. If you’re a white executive of a major arts organisation you should be preparing to vacate your position or at the very least right now mentoring a Person of Colour to take your place. We as an industry need to be better and hold ourselves accountable on the diversity marketing statements we make or someone else will.

Travis De Vries is a Gamilaroi creator of dark fiction, graphic artwork and fantastic worlds. He is a conceptual artist, performer, writer, composer and commentator genre spanning and boundary crossing creative work with a background in visual arts and Indigenous culture. Travis creates world within worlds, brings to life characters on the page and canvas from his ever growing, fantasy, parallel universe. Travis creates unique, narrative led large-scale exhibitions combining multiple forms; paintings, drawings, projections and experiential sculptures focusing on recreating and evolving Indigenous and Western Mythologies for a modern era. Storytelling is at the heart of his practice, through the use of fable, metaphor, symbolism and storytelling tropes he invokes a deep connection with audiences to explore a range of both personal and universal themes including; Indigenaity, violence, destruction, politics, love, death and relationships. All of this comes together to create an experiential style of work that is both unique and familiar.  Instagram: @travishdevries Twitter: @travishdevries