First Nations drama shaping us in the 1990s

The potency of drama in the development of our national story has been greatly under appreciated, argues Professor Julian Meyrick in his new book Australia in 50 Plays.
Julian Meyrick 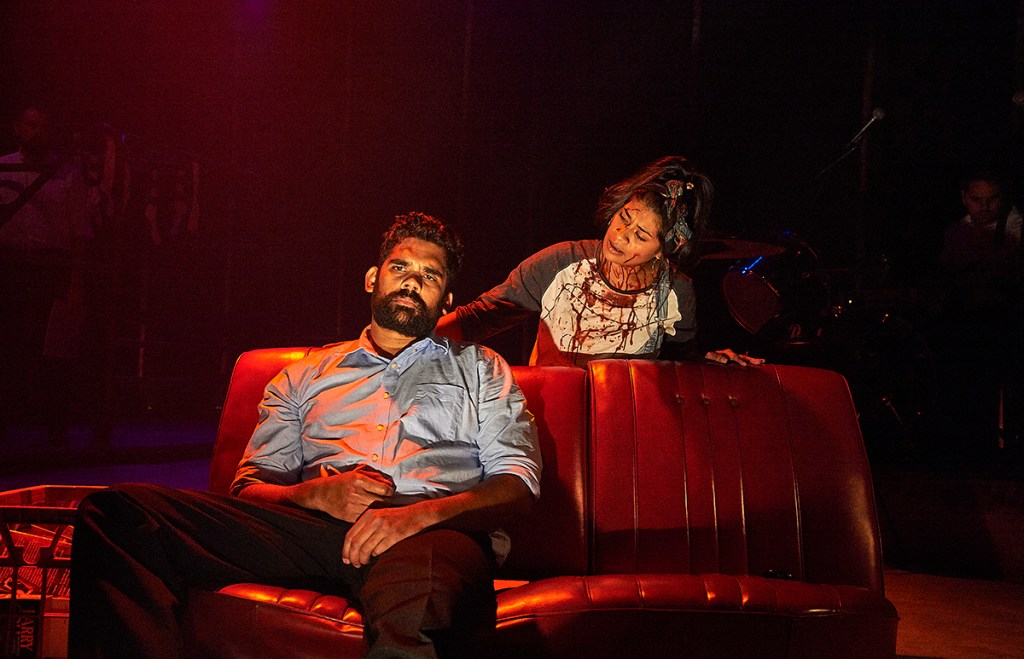 When is history over? When should we hold on to the past, and when should we let it go? And how? What happens if some people cannot remember what others cannot forget? Time, history and memory are closely interwoven. History defines our sense of time, and vice versa. Memory populates history and divides time into eras, naming them, the simplest denominators being ‘before’ and ‘after’.

What fateful consequences those two short words can signpost. Before 1788. After 1788. ‘The first step in the creation of our white utopia was brutal and relentless’, writes Julianne Schultz in her recent book The Idea of Australia, reflecting on our white history:

‘It depended on the humiliation and elimination, by design and neglect, of the million First Nations people who in 1788 still called the continent home as they had done for countless generations with an elaborate, ancient patchwork of languages, social relations, trade and lore… [B]y the time the 3.7 million new arrivals became Australians in 1901, the First Nations’ population had been reduced, systematically and deliberately, to about 90,000 people.’

Some things do not get better with the passage of time, they get worse. As historians continue their work of constructing factually accurate accounts of Australia’s colonisation, other domains deal with its moral, social and political implications. Drama is a serious register of collective address. It is not only an aid for a nation looking to speak of events in the past in a different way. It is sometimes the only means by which a nation can speak of such events at all.

The companies involved in producing these and other First Nations’ plays – particularly Ilbijerri Theatre Company in Melbourne and Yirra Yaakin Theatre Company in Perth – are as crucial to the development of this body of work as the Nimrod Theatre and the Australian Performing Group were to New Wave drama 20 years earlier. In retrospect, it looks like a creative contribution waiting to happen. At the time, it was a difficult struggle for recognition and resources.

Carl Jung coined the term ‘shadow self’ to describe parts of our personality we excise from consciousness because they threaten our preferred identity. Encountering the shadow self is an important challenge for those who want to live an integrated life and involves acknowledging aspects of ourselves we have previously refused to accept. Stolen, Black Medea and Conversations with the Dead can be thought of in this deeper way. They are not simply additions to the national repertoire: they open up a new dimension of dramatic experience for Australian audiences.

This dimension is painful to engage. In the case of Conversations with the Dead, about the trauma involved in investigating Aboriginal deaths in police custody, overwhelmingly painful. Here, the entertainment function of drama is necessarily secondary to its educational function, and it is no surprise that two of the plays, Stolen and Conversations with the Dead, were connected to government inquiries.

It is worth contrasting the reports with the plays. In the tonal range and power of their speeches and dialogue, their imaginative action, images and kinetic moments, the plays act as a shadow self to the official documents. The truths of a nation are not only to be found in its record-keeping, but in the cultural responses they provoke.

History dominates these plays in a highly particular way. The past is not distant, but oppressively close, pressing down on the characters like the stormy skies that dominate the environments they inhabit. Inherited trauma is a hurricane force, generations torn apart by events that have previously happened, and what threatens to occur again. This impacts not only at a narrative level – in stories that show the reproduction of racial and gender violence over time – but at the inner level of character.

Jack, the central investigator in Conversations with the Dead, Jason and Medea in Black Medea, and the five institutionalised children-come-adults in Stolen – are scarred by being treated for what, rather than who, they are, unable to escape the political implications of being Indigenous in a society that responds to them on the basis of race. As this view is coercive, constricting and abusive, it bequeaths a legacy of disempowerment. The challenge is how to escape it.

Structurally, Stolen, Black Medea and Conversations with the Dead draw on the poetic strain in Australian drama; thematically, they draw on the realist strain. They continue the trend towards scenic fluidity observable from the 1950s onwards. There are passages in all three plays where present action and past memories commingle, and ‘real’ and ‘imagined’ exchanges achieve functional equivalence. However, their political messaging reaches a new intensity of purpose.

Building on plays like Robert Merritt’s The Cake Man (1976) and Jack Davies’ No Sugar (1981), these plays assay events not previously seen on the national stage. The dialogue is light-touch in construction, but biblical in its feeling of ultimate reckoning. As in all encounters with the shadow self, there is a sense that what lies beneath surface appearance is coming out. Nothing can be repressed forever. Justice will be served. More than perhaps any others in this book, these plays leave audiences with a question about what they will do after they have left the theatre.

Tackling the three plays together reveals their homophonic qualities, the way they echo each other. Stolen premiered in 1998 after a long period of research and collaborative development. In May 1995 the Australian Human Rights and Equal Opportunity Commission began its Inquiry into the Separation of Aboriginal and Torres Strait Islander Children from Their Families. Almost two years later it handed down the Bringing Them Home report. Workshops for Stolen, it should be observed, started three years before this.

A government inquiry also provided the backdrop for Conversations with the Dead, while the drama shows what is at stake in human terms. Jack, the central character, is the alter-ego of Richard J Frankland, the gifted and polymathic playwright of the Gunditjmara people of southwestern Victoria. In 1988 Frankland was appointed to the Royal Commission into Aboriginal Deaths in Custody that ran from 1987 to 1991. The Commission was charged with investigating the deaths of Indigenous persons while under arrest, being pursued by the police, in pre-trial remand, in prison or in youth detention. Frankland dedicates his drama ‘to anyone who has seen too much grief either through their own eyes and soul or through the dreaming path of others’.

In the professional, cultural and political scope of these plays there is renewed emphasis on drama’s truth-revealing power, its capacity to offer general views of, and to, the nation. Australian drama’s stylistic techniques continue to expand, reflecting the exploratory growth of different dramatic strains inherited from earlier periods. But its intellectual and emotional engagement becomes more concentrated.

Drama’s value as a mode of inquiry increases, even as its messages become harder to bear.

This is an extract from Julian Meyrick’s Australia in 50 Plays available through Currency Press.