Extraordinarily human: training the next generation of circus artists

Anni Davey joined the Flying Fruit Fly Circus as its new Artistic Director in July. She reflects on a mid-career shift from freelance director to the artistic leadership of a nationally treasured youth circus.
Anni Davey 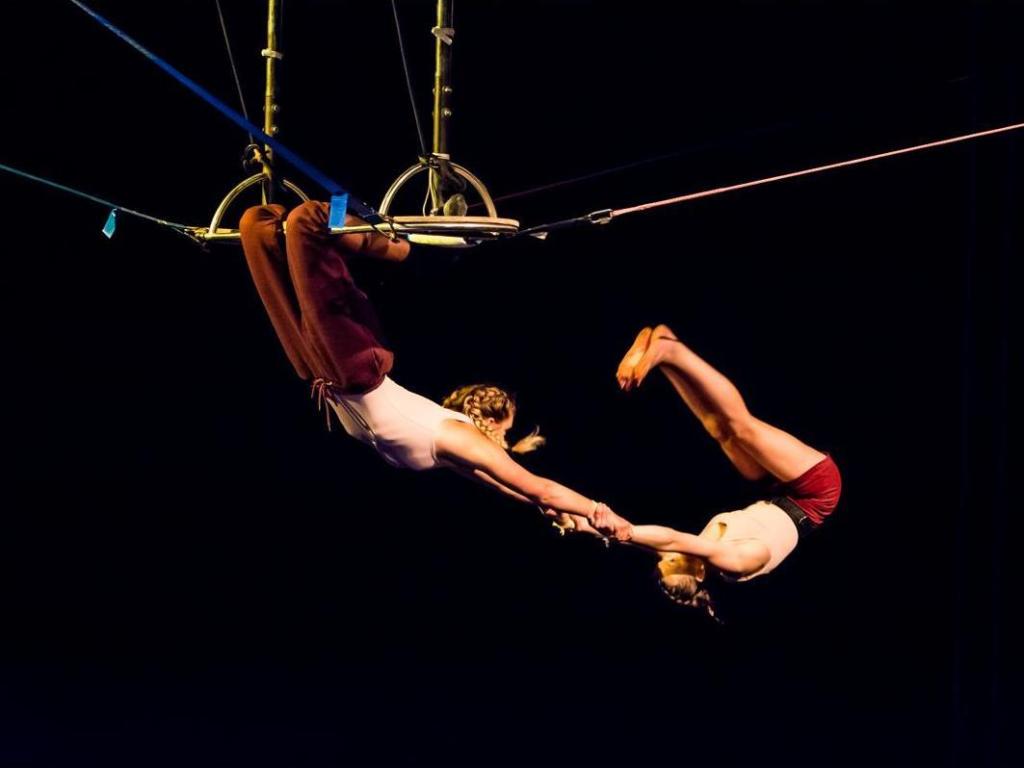 I have been working in circus since the late 1980’s when I joined Circus Oz as a performer. Back in those days there was almost a symbiosis between Circus Oz and The Fruities. Oz performed in the Fruities’ pink and white candy striped 600 seat Big Top, which had been designed and made for them by Tim Coldwell, a grand old man of Oz (who was grand but not so old back then). It would be difficult to pin point a moment when there wasn’t a Fruit Fly in an Oz show. It was expected that if you were passing through Albury you would drop in at the ‘Y’ (now Hot House Theatre) which also housed the offices of the Murray River Performing Group (MRPG), whose 1979 school holiday program gave birth to the Fruities.

Together, Oz and the Fruities were like an extended family. I watched kids grow up and emerge into the industry where they became my peers and companions on stage. And I watched my elders, the pioneers and developers of this new circus grow up and older, moving out of the industry and into academia, or community theatre, or event direction. There was no, still is no, well-trodden career path for a contemporary circus performer that I can follow, but some new paths have been carved, and some roadblocks and obstacles have been identified and dismantled by those going before.

Circus has been and continues to excite me more than any other art form. I believe that as circus performers we have an opportunity to authentically engage with our audiences in a way that is not possible in other art forms. The theatre requires us to suspend our disbelief, to disregard contrivances and conventions and pretend that we don’t see the box around the performers. In the circus we require that our audience believes what they see. We are really doing the thing which is really high in the air, or impossibly and intricately difficult or unusual. We are not super human! We are resolutely and completely and extraordinarily human.

When I was encouraged to apply for this job I realised that this was an opportunity to affect the shape of the future circus. As an independent artist I have been at liberty to leap nimbly from project to project, performing here, directing there, teaching a bit. The thought of focussing on one single organisation for the next few years is daunting.

I want to articulate and develop career paths, and to forge inroads into international circus communities. I want to develop Australian circus by striving for excellence both in skills and apparatus development, and by driving the conversation around the art of circus.

These young artists that I now find in my charge will be the next generation of circus artists. They will achieve and develop skills that I could never have dreamed of. They will innovate and surpass us. I am determined that this future circus is one that is curious and interrogative, that acknowledges its responsibility to develop the art alongside the skill. That engages with the communities that we live in, geographic, social and digital, prodding and poking, questioning status quo, jolting us from complacency. What it will look like? I no longer regard that as my responsibility. I want to guide young artists to be prepared and willing to take that on. To make the circus that they inhabit and create reflect their ideas, their aspirations, their artistry.

The Flying Fruit Fly Circus is in a really good place right now. Jodie Farrugia, my predecessor, has led the artistic development of the company for the last four years from strength to strength, with her latest show JUNK receiving awards and accolades all over the country. On the business front our funding allies, local, state and federal are strongly supportive. I wake up at night concerned that I could bugger it all up! But I hope I don’t!

In the future I hope that circus in Australia is a normal part of the cultural fabric of society. Just as it is normal to be able to swim in Australia, I would like to see every kid able to do a back flip, juggle three balls and climb up a rope.

Australia has an opportunity to be a world leader in the circus arts – these ordinary kids who are the Fruities will lead that charge.

Anni Davey joined a youth theatre company, SWY, in Fremantle WA in 1983. In 1985 she joined Death Defying Theatre and began on a performance path trod by acrobats and activists, through traditional agit-prop and feminist street theatre to international stages. She joined Circus Oz as a performer in 1987 and has continued working there in many different capacities ever since, including as Guest Director, Assistant Director, Operations Manager and Acting General Manager (1998 and 2009). She was Technical Coordinator on the construction of their new building in Collingwood (2011 – 2014), and directed the annual show TWENTYSIXTEEN in 2016. In the early 1990s Anni was involved in the formation of two independent performing companies, both highly regarded as creating seminal works in circus and in musical theatre. Club Swing toured their aerial shows APPETITE and RAZORBABY around Australia and internationally from 1994 to 1999. Crying In Public Places toured three a-cappella theatre shows (CRYING IN PUBLIC PLACES, JUMP! and SKIN) around Australia and internationally until 2001.   Anni’s directing practice, in development since 2006, includes a fruitful collaboration with Sarah Ward as Yana Alana. Their shows together have won nine Green Room awards for Cabaret including Best Director (twice), and Best Diva, and a Helpmann award for Best Cabaret Artist in 2014.  The latest show QUEEN KONG premiered at the 2018 Adelaide Cabaret Festival. Anni also directed Maude Davey’s retrospective MY LIFE IN THE NUDE which has played to critical acclaim in Melbourne, Perth and Hobart. Anni directed Circus Oz’s acclaimed show TWENTYSIXTEEN, the USA tour of STRAIGHT UP (2017), the Australian regional tour of MODEL CITIZENS (2017, 2018) and the education show STACKS ON and TIN TOP (late 2017). In 2016 Anni spent a month in New York City as Guest Director with Brooklyn’s LAVA, a dance company with a circus repertoire, on the development of their 2017 show A GODDESSEY. In 2015 Anni and her twin sister Maude joined forces to create RETRO FUTURISMUS, a cabaret prognostication which has played three sold out seasons at fortyfivedownstairs in Melbourne (2015, 2016 and 2018) and featured at the 2017 Sydney Festival, 2017 Darwin Festival and the 2018 WA Circus Festival. Anni has directed three Sandfly Circus productions in Broome, TOTAL REBUILD in 2015, NIBJLM in 2016 and COME FLY WITH US in 2017. Anni sat on the Board of Melbourne Fringe for ten years including two years as Chair (2006, 2007) and was Chair of the Australian Circus and Physical Theatre Association (ACAPTA) from 2010 until 2017. Anni started her new job as AD of the Flying Fruit Fly Circus in July 2018.