Creating a future for opera 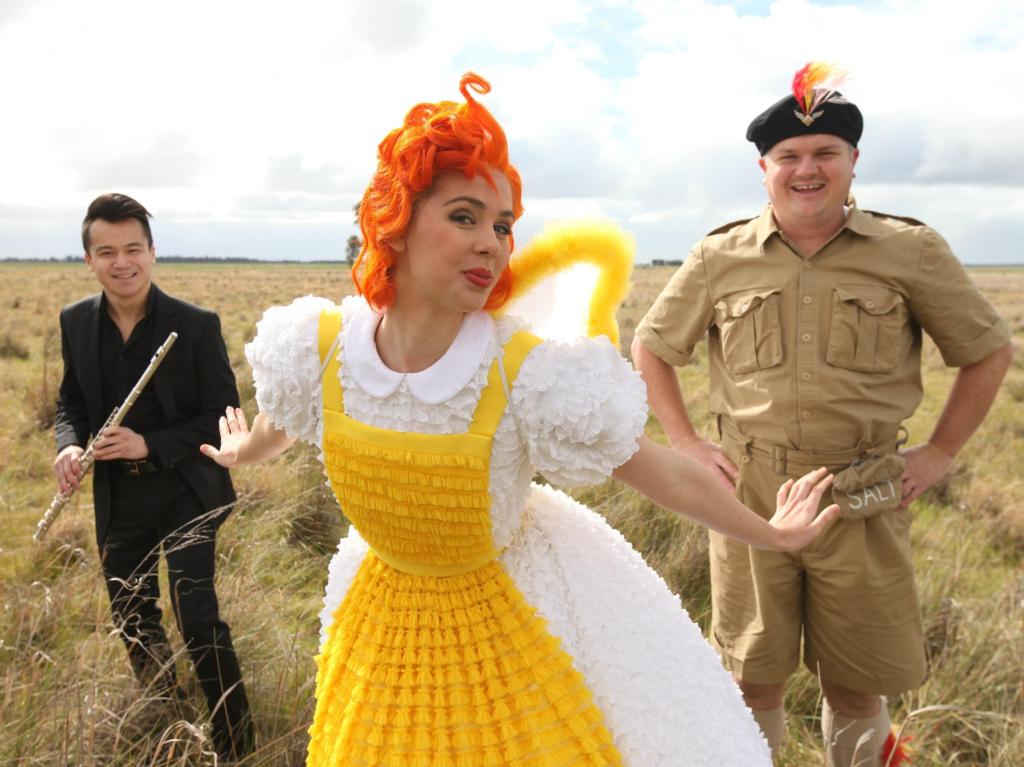 While city-dwellers have had their pick of opera and music theatre performances at the Sydney Opera House and Arts Centre Melbourne this year, out in regional Australia, touring shows have brought some musical magic to some unusual venues.

Opera Australia’s new production of The Magic Flute – a family friendly, Indiana Jones-inspired, shortened, English language version – has been on tour, taking over stages as diverse as a pig shed in Morundah, an arts centre in Wangaratta and the Theatre Royal in Hobart. And this year, it’s not just about Opera Australia’s singers – it’s also about the community getting involved.

For the first time, in 2014 local children had the opportunity to perform as part of Opera Australia’s annual Regional Tour (formerly known as Oz Opera). More than 470 kids across four states and territories learned parts in The Magic Flute, and then performed on stage with Principal Artists from the company in a fun, Indiana-Jones inspired version of Mozart’s classic quest opera. They’ve been known as the Regional Children’s Chorus.

Opera Australia has been touring regionally since 1996, and this year, the company sought out new ways to engage local communities.

‘It was important for us to find ways to engage with local communities over a longer period of time,’ said Craig Hassall, CEO of Opera Australia. ‘Touring can be a fly-in, fly-out experience. We wanted to increase our engagement with whole communities leading up to the show.’

Over the years of touring, Opera Australia has run workshops in local schools and with local musicians, performed alongside indigenous bands and even streamed performances into remote communities, but this year, the new Regional Children’s Chorus project took community engagement to a new level.

A travelling Chorus Master visited each town a few days ahead of the opera to work with a choir drawn from local primary-school aged children. The children had already been getting the hang of their parts while also learning about Mozart and the art of opera. Before the performance, the kids were fitted with costumes and rehearsed the opera on stage with the cast and the orchestra.

The pilot program was such a success – ‘The kids stole focus in every show,’ laughed Hassall – that it will run again next year.

‘If we want people to come to the opera, as audience members, we have to introduce them at an early age,’ said Alpha Gregory, who directs the Woden Valley Youth Choir that performed in Canberra.

Opera Australia also offered a Regional Student Scholarship for the first time this year. More than 100 young aspiring opera singers applied for the scholarship, which will see 10 secondary students travel to Sydney for a week in January, attending Opera Australia rehearsals, performances and coaching sessions from coaches and repetiteurs.

These new initiatives – the Regional Children’s Chorus and Regional Student Scholarship – have been a long-time dream of Opera Australia, and although it added a new layer of logistical challenges to an already complex tour, the experience was utterly worth it, said executive producer Sandra Willis.

This year, 25 choir leaders, 46 chaperones, 1 schools coordinator and 1 Children’s Chorus master joined the team of people who work to make the tour happen. On the road, that’s 12 Opera Australia singers, nine musicians, two conductors, three mechanics, and one stage manager, tour manager, truck driver and bus driver. And behind-the-scenes, there are many more.

Despite the challenges, the Regional Tour is a vital part of Opera Australia’s commitment to reaching diverse audiences. ‘We believe distance shouldn’t be a barrier to experiencing great live performances,’ said Hassall. ‘We changed the name of our touring and outreach arm from Oz Opera to simply the Opera Australia Regional Tour to reflect this in 2014. Our touring shows command the same kinds of input and attention as our seasons at the Sydney Opera House and Arts Centre Melbourne. The only concessions we’re prepared to make are ones of scale – we have to fit the show into a semi-trailer.’

For the performers, and the team behind the scenes, the greatest reward comes not from the packed-out theatres and civic centres, but from the audience feedback after the show.

One audience member from Wollongong, wrote to Opera Australia that it had challenged his snobbery about opera. ‘The fun detail and spirit of The Magic Flute overcame my bigotry so much that I experienced the music and the vocal expertise of the first time … it was cathartic! The experience ignited something in me that has been dormant since the mid-70s – passion about music.’

The tiny Riverina town of Morundah is proof-positive that opera can be for everybody. When Opera Australia returns there, they will perform not in a pig shed, but in a new venue. In a town of just 20 people, the audience for the bi-annual Opera Australia performance has outgrown its shed, and Morundah is raising money to build its very own opera house.

By the time the Regional Tour finished up in Tasmania in late September, more than 16,000 people had seen The Magic Flute on stage in Australia’s southern states. Next year, the tour will continue on the second of its two-year path – its ‘hot’ leg, taking in Queensland, the Northern Territory and Western Australia. From Alice Springs to Esperance, hundreds more children will be given the chance of a lifetime: to make their opera debut in their own home town. And thousands more will be entertained with a night of opera close to home.

For Opera Australia, seeing opera live and breathe across geographic and generational borders is at the core of giving it a life and a future in the 21st century.