2019 is the year of Indigenous Languages, so get talking

First Nations artists and arts workers offer advice on how to embrace the International Year of Indigenous Languages.
Gina Fairley and Richard Watts
[This is archived content and may not display in the originally intended format.] 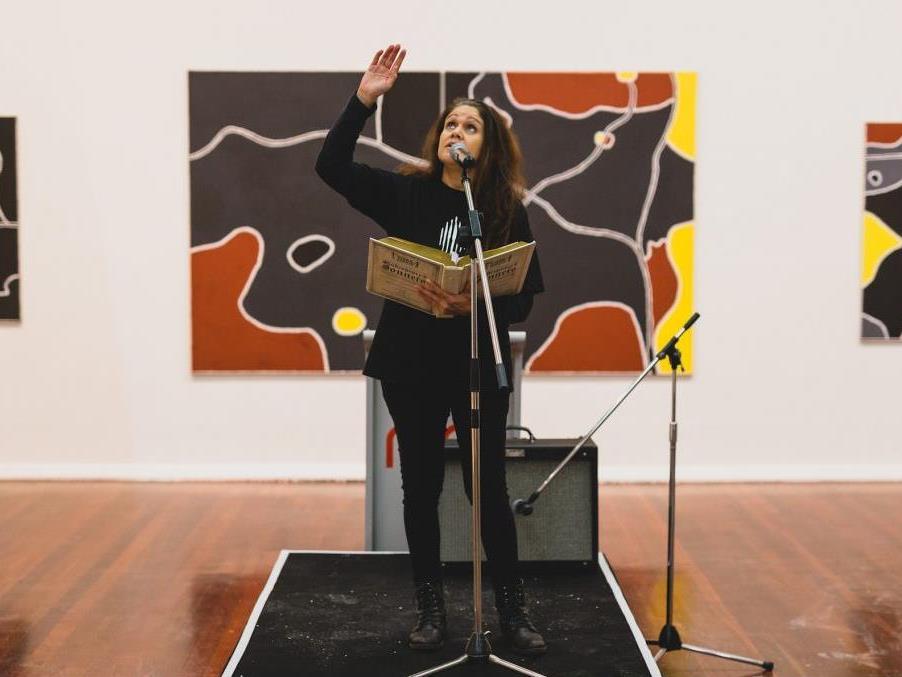 In Australia, of the estimated 250 Aboriginal and Torres Strait Islander languages spoken prior to British colonisation, only around 120 are still spoken. Of these approximately 90% are endangered.

The Federal Government’s Indigenous Languages and Arts (ILA) program provides over $20 million annually to Australian community-based organisations for projects that support participation in and maintenance of Indigenous culture through languages and arts.

This money is used to support:

In August last year, ahead of IY2019, the Federal Government announced it would fund 96 projects at $15 million through the 2018-19 Indigenous Languages and Arts program.

IY2019 is an opportunity to continue raising awareness and take further actions to improve the preservation and promotion of Australia’s Aboriginal and Torres Strait Islander languages.

ArtsHub spoke with a number of stakeholders within Australia’s First Nations communities to garner what this year of focus on language means to them as cultural workers.

Why is this year of Indigenous Languages important?

‘In my language – Nyoongar – for example – the word for land is “budja” and the word for being pregnant is “budjari” – so closely tied is the cultural idea that you give birth from Country. In my language also there is not strictly a word for “art”. We have words that express the holistic notion of culture – and thus language expresses the thought processes underpinning the way we hold knowledge. The re-positioning of the criticality of language is a political act that allows those who have lost language and those who want to deepen their articulation of it a mechanism for cultural revitalisation.’

Nici Cumpston, Artistic Director TARNANTHI and Curator, Aboriginal and Torres Strait Islander Art, Art Gallery of South Australia (AGSA) told ArtsHub: ‘For artists who speak their traditional languages it is very important that we all work hard to enable them to be able to express themselves in their first language. Raising awareness of Indigenous languages will also give the general public an opportunity to learn more about the cultural diversity of our many different language groups across Australia.’

The MCA and AGSA have recently partnered on the exhibition John Mawurndjul: I am the old and the new, which includes bi-lingual texts and a website that remains an ongoing resource for the interconnection of language and art. Visit www.johnmawurndjul.com for details.

Wesley Enoch, Artistic Director of Sydney Festival, notes that Indigenous Australia is on the cusp of a major generational change.

‘The number of Indigenous young people in this country will soon outnumber old people … so we’re about to see this generational shift as older people die off, and one of the great losses will be the cultural diversity of language,’ he said.

‘And for me, Indigenous language in this country is a way of explaining the world around us, remembering that Indigenous languages often give you cultural insight into the land that you live in – so if you lose the language you also lose ways of connecting with the land.’

Enoch explained with a practical example. ‘Where I come from there’s very limited use of adjectives in the language, so there’s this complex metaphor established that connects the environment to language. So for instannce if someone’s a tall person, they’re not tall, they are a tree – and if you don’t have language around the tree you lose the nuance of how you can create meaning. And for me that gives a connection to landscape and a responsibility to it, so to me it’s also an environmental movement – language is the way of connecting all these topographical features and flora and fauna and everything into the way you explain yourself in the world.’

Artist and Artistic Director of the 2020 Biennale of Sydney, Brook Andrew believes it’s not just this year that’s important in terms of witnessing and preserving Indigenous languages – every day is important. He said: ‘Language strengthens culture and our self-commitment to remember who we are and our ancestors. The sad reality of linguicide in Australia and internationally requires visibility, celebration and programs supporting and strengthening Indigenous languages.’

He continued: ‘Complexity of languages allows for different world views and understanding of our universe, otherwise humanity becomes conflated. Article 13 of the United Nations Declaration on the Rights of Indigenous Peoples states that we have the right to sustain our language which also supports our sovereignty.’

Carly Lane, curator of Indigenous art at Art Gallery of Western Australia (AGWA) makes the point of the role of language in uniting Aboriginal people. ‘Language is an important expression of self, community and culture and is sometimes the only word or phrase that best captures your expression and worldview as an Aboriginal person. Whether it’s traditional language, Kriol or Aboriginal English – these languages unite us as Aboriginal people,’ she said.

‘To First Nations people, learning our language can help reaffirm who we are and our responsibilities. For non-indigenous people, a better understanding of the First Nations language of the land they are on may foster a greater respect of the knowledge that maintained balance and sustainability of the local ecosystem for tens of thousands of years,’ Sentence said.

What is your advice to people to best embrace this year’s theme?

Nici Cumpston‘s advice is simple: ‘Learn a few words in the language of the traditional owners where you live and work and when you travel, find out who the local Aboriginal or Torres Strait Islander people are so you can acknowledge their sovereignty and ongoing connections to Country.’

Brook Andrew agreed with Cumpston: ‘Many Australians can learn an Indigenous language that are often provided in local schools and courses. To learn more Indigenous languages is to empower ancient cultures and to act in humanity to see the world through a difference lens, lenses that are rich, empowering and fulfilling.’

Carly Lane takes it a step further: ‘Feel confident to use language, if people don’t understand it, they soon will. It will soon change the way, namely enrich, the way we connect with each other.’

Keeping language alive through art is key to Yirra Yaakin’s The Noongar Shakespeare Project, a long term cultural and creative endeavour celebrating Noongar culture and language which commenced in 2012.

‘You can never under-estimate the importance of keeping a language alive through the power of theatre,’ Kift said. ‘Not only will we be seeing blackfulla faces on the stage, but we will be hearing a play written by the world’s greatest playwright re-imagined using our endangered Noongar language. A great deal of the time, we only hear Noongar spoken at Welcome To Country’s. This play will be a world first and celebrate one of the greatest plays being performed in a language which is only spoken fluently by less than 400 speakers within the Noongar Nation. Throughout the creative development period our artists are not only learning or improving their language skills, they are re-connecting to the cultural significance of the language, They will be performing it to a much wider audience, who normally would not have the opportunity to experience the beauty and poetry of the Noongar language. It’s going to be an amazing experience for everyone involved in this incredible project!’

Wesley Enoch advises people to begin by learning about the language of where you live or where you were born. ‘What are the languages, what are the naming words of that place? That way you can at least start to understand where you come from and who the local people are so you can acknowledge them.’

For the third year in a row, Sydney Festival is running classes for locals seeking to learn more about the languages spoken by Sydney’s First Peoples. Bayala (‘Speak’) classes are run in several locations, and reflect the linguistic complexity of the region.

‘In the Sydney area, is it Dharug, is it Gadigal language, is it Eora, is it Dharawal? It’s very contentious territory … and what we do through these language courses is start to bridge some of the different discussions so people can come together. And we’re even thinking that in 2020, after three years of doing these language courses and pulling different groups together that we’ll then hold a language Symposium to look at clarifying and documenting a little bit more of the language,’ Enoch said.

‘It’s really about saying “What’s the long term plan here? Is there curriculum development? How do you start to rename things or use dual names for things? How do you grow the use of the language as a way of connecting to our longer history?

‘This is very early days, it’s just testing waters. By raising these questions we have been able to start to create a bigger network of teachers and speakers – the next question is how do we keep growing that in the future? Not just doing classes in January, which are pretty easy low-hanging fruit if you like, but then going, okay, what’s the next step, and the next step? That’s what we’re going through now,’ Enoch concluded.

Clotilde Bullen told ArtsHub: ‘There are many Aboriginal and Torres Strait Islander land councils and other groups across the country who offer, usually for no charge, language classes. Sometimes these are offered through schools. Singing songs in language is a fun way to learn and can be done with children also! There are a collection of Aboriginal and Torres Strait Islander songs online, from all around the country.  If you go online also there are a number of excellent language resources – although its nicer to hear it spoken. The South-West Land and Sea Council in WA has a fantastic online language resource, for example. The MCA offers spoken words and explanations online as part of our John Mawurndjul: I am the old and the new exhibition, where John and his family have been recorded speaking important words, which are then supplied with an explanation.’

Nathan Sentance added that many First Nations peoples have led and controlled language revitalisation initiatives. He continued: ‘To coincide with this, it would be good for people to learn history better, and to recognise that the loss of First Nations languages was the result of past government policies to disrupt First Nations identity.’

He added: ‘Also, remember that a lot of places, plants and animals local to your area have a name that predates the ones they may have now and the loss of those First Nations names and words mean a loss of a connection and an understanding.’