The Yirrkala community lost a bold and individual talent with the passing of Ms D. Yunupiŋu.
Gina Fairley 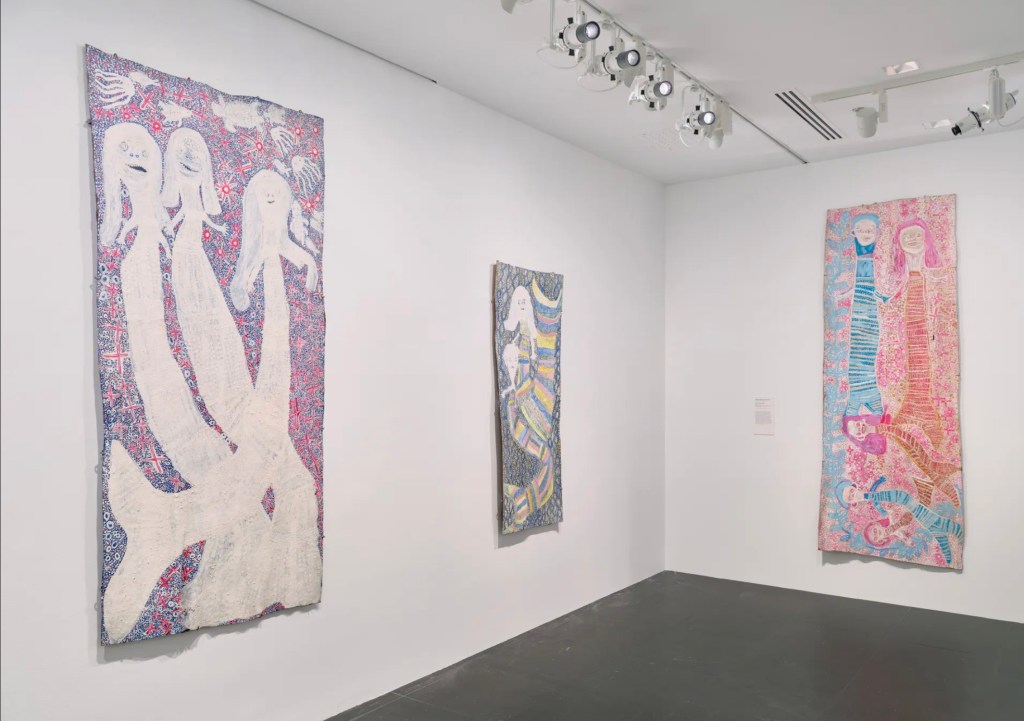 Ms D Yunupiŋu (c.1945 – 2022) had a whirlwind of successes in the last two years with her vividly coloured, highly distinctive – and somewhat whimsical – bark paintings that captured the eye of curators and audiences.

She was announced as a finalist in both the 2021 and 2022 Telstra National Aboriginal and Torres Strait Islander Art Awards (NATSIAA) at the Museum and Art Gallery of the Northern Territory, Darwin, and became the first artist to ever be selected with a portrait on bark as a finalist for the Archibald Prize at the Art Gallery of New South Wales, in 2021.

That same year, she was also featured in Bark Ladies: Eleven Artists from Yirrkala at the National Gallery of Victoria (NGV) International in Melbourne, and the 2021 Tarnanthi exhibition at the Art Gallery of South Australia.

One needs to remember that Yunupiŋu only began painting in late 2019. Before 1970, no Yolŋu women painted sacred themes on bark or larrakitj (bark poles) in their own right. But Ms D Yunupiŋu was among a number of women artists who, in recent years, have become ‘renowned both nationally and internationally for daring and inventive works that challenge tradition,’ writes Russell-Cook, for the NGV.

She was a highly respected Yolŋu elder based in Yirrkala in the Northern Territory, and widow of community leader Roy Marika. She was born on Inglis Island in East Arnhem Land.

Her works are created using a unique combination of natural earth pigments with reclaimed toner ink from discarded printer cartridges, giving them their pop of colour in pinks and blues, also placing her within a community of artist working out of Buku Larrŋgay Mulka Centre, known for their experimentation and fresh energy.

Nici Cumpston OAM, AGSA Curator of Aboriginal and Torres Strait Islander Art, told ArtsHub: ‘Renowned for her free, expressive paintings on bark she incorporated earth pigments and recycled print toner to depict powerful images of herself as a mermaid. Her works emanate her joyous personality and were a highlight in the 2021 Tarnanthi exhibition.’

While she was not the first artist to paint with toner ink – that was Maḏarrpa artist Noŋgirrŋa Marawili – her paintings on bark and timber board were extremely individual. Like most Aboriginal artists, Ms D. Yunupiŋu drew on personal stories – in her case her conception.

Her paintings describe how her unborn spirit visited her father in the form of a mermaid, and how her father tried to spear the mermaid, believing it to be fish. He then fell asleep and upon waking, Yunupiŋu’s mother confirmed that she was with child.

Family was everything to Ms D. Yunupiŋu. Her Archibald finalist work was titled Me and my sisters. She said of the painting (statement translated): ‘We sisters are like stars. We don’t want to lose each other. And that’s why we are called stars. Because we are one. We share our love with our kids and bring them together. We are not separate. This is how family life goes on in Yolŋu way, Yolŋu culture, in Yolŋu attitude, Yolŋu everything.’

With the sisters dying within the space of twelve months, it has been an especially deep loss for the Yirrkala community.

‘It was my great honour to get to know the lady who paints mermaids, Ms D Yunupingu. I first met her while putting together the exhibition Bark Ladies: Eleven Artists from Yirrkala. Her visionary painting style and audacious compositions were a highlight of the exhibition. The show, and the accompanying children’s exhibition The Gecko and the Mermaid would not have been possible without her deep generosity and guidance. On behalf of everyone at the NGV, we send our sincere condolences to her family, and to the Community at Yirrkala,’ continued Russell-Cook.

In April 2021,  she presented her first-ever solo exhibition, I am a Mermaid, at Alcaston Gallery in Melbourne, which was a sellout show.

Alcaston Director Beverly Knight said in a formal statement that we farewell ‘an artist of great joy and optimism. Ms D. Yunupiŋu leaves an immense artistic and cultural legacy; both as a gifted and celebrated artist and as a respected leader of her community.’

Ms D Yunupiŋu’s passion for community is also demonstrated in her love of language. She also learnt weaving from her mother and is said to have had a wonderful voice and enjoyed singing, especially in Yolŋu Matha, the language of Yolŋu people.  Her brother is Yothu Yindi, lead singer Mandawuy Yunupingu.

In the children’s learning exhibition The Gecko and the Mermaid, she worked in collaboration with award-winning Yolŋu artist, author and filmmaker Siena Mayutu Wurmarri Stubbs, who is also the granddaughter of the Yunupiŋu sisters.

‘Siena’s voice can be heard throughout animations inside the exhibition, helping children to pronounce words in the Yolŋu Matha language, explained the NGV. ‘We hope the work of the two sisters and artists will inspire the next generation of young artists, and foster a deep and continuing connect with First Nations culture,’ added Director Tony Ellwood.