The 11-year making of a ‘people’s dictionary’ for Australia

Youse wouldn’t believe it: Roslyn Petelin takes a look at a new book that charts the making of a ‘people’s dictionary’ for Australia.
The Conversation 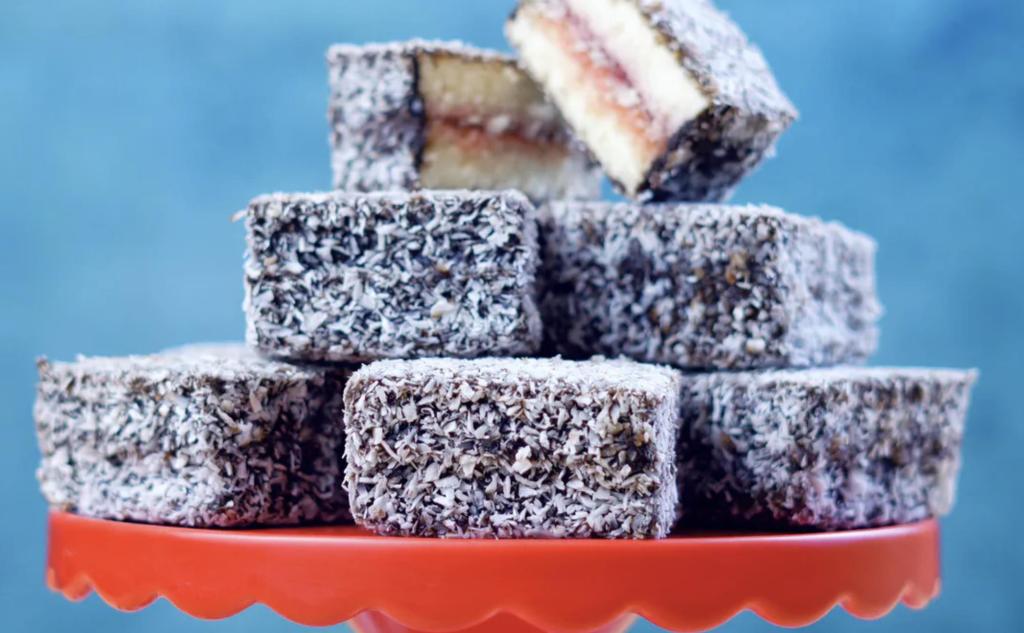 In 1973 Pat Manser answered an advertisement in the Sydney Morning Herald seeking a research assistant to work on phonetic transcriptions for a dictionary of Australian English.

Now, nearly 50 years later, she has published her monumental account of the making of this dictionary, which in the words of Thomas Keneally, ‘paid the Antipodean tongue the great compliment of taking it seriously’.

If you’re a word aficionado, you’ll love this book. I could not put it down until I had read through to the end of the final section, which contains the wonderful launch presentation speeches for all eight editions of the Macquarie Dictionary.

John Bernard, a chemist who was appointed Associate Professor in the Department of English and Linguistics at Macquarie University in 1966, had published a paper in Southerly in June 1962 about the need for a dictionary of Australian English. He argued that we need:

…a dictionary of our own because our idiom, usage, invention and especially pronunciation are sufficiently different from those of other Englishes.

In December 1969, Brian Clouston, who had founded Jacaranda Press in Brisbane, agreed to fund a dictionary that would be

…aggressively Australian, not to be encyclopedic, not to be illustrated, to be in one volume, and to be ready in two years.

Bernard’s colleague at the university, Professor Arthur Delbridge, was appointed chair of the editorial committee to compile the book. He argued for a ‘people’s dictionary’ that would ‘hold up a mirror directly to contemporary Australian speech and writing’.

Should the new dictionary describe how language was used or prescribe its use? Image: Shutterstock

However, the Macquarie editorial committee was ‘adamant that its dictionary was to be descriptive’, a move now standard in English language dictionaries. The committee wanted as comprehensive a dictionary as possible, so spoken as well as written words were included.

The Macquarie lexicographers had started work in 1970; the first edition was published in 1981. The 8th edition, published in 2020, and its thesaurus contain more than 300,000 Australian words and definitions.

It is no surprise there were controversies to contend with in the years it took to compile the first edition.

The test for inclusion of words and expressions is currency. How often do you hear people say, ‘I’ll see youse later?’ That particular Australianism is included in the dictionary because, as an entry explains:

English you does not distinguish singular from plural. The form youse does provide a plural, contrasting with singular you, but there is strong resistance to it, in spoken as well as written language, and it remains non-standard.

Other tests include whether a word is accepted by the language community, whether it’s used extensively, or whether it’s too individual or specialised. Is it likely to stand the test of time? Is the entry well supported by citations?

Language is forever changing, so the challenge for a dictionary is its capacity to remain up to date. Manser amusingly illustrates the growing acceptance of ‘literally’ to be understood as ‘figuratively’ with a quote from Amanda Vanstone:

But I can assure you that we are literally bending over backwards to take into account the concerns raised by colleagues.

As the recipient of elocution lessons in my early education I was fascinated to learn about the dictionary’s engagement with spoken English pronunciation. Then there is the fraught question of the description of iconic foods. Should Lamingtons be dipped only in thin chocolate icing and coconut? Not necessarily. There are pink jelly lamingtons and, more recently, Tokyo lamingtons, which have apparently landed with flavours of matcha and black sesame.

Manser’s least favourite word is mansplain, Word of the year in 2014. She hoped it would be ephemeral … but it was recently just nudged out by ‘fake news’ for word of the decade.

The dictionary was launched on 21 September 1981 as The Macquarie Dictionary because it would “add prestige to the dictionary to be associated with a university”, as the Oxford one was.

A special cocktail, the Macquarie, was created to mark the occasion: ‘Champagne, mango juice, Bitters, Grand Marnier, and a whole strawberry to float on the top’.

The reviews were glowing, except for one condescending and scathing review by the editor of the second edition of the Oxford English Dictionary. Robert Burchfield, a New Zealander, accused the committee of a ‘charming unawareness of the standards of reputable lexicography outside Australia’.

The new dictionary sold very well: 50,000 copies in its first year and another 50,000 copies over the next 18 months. Within ten years there were 23 spin off editions. 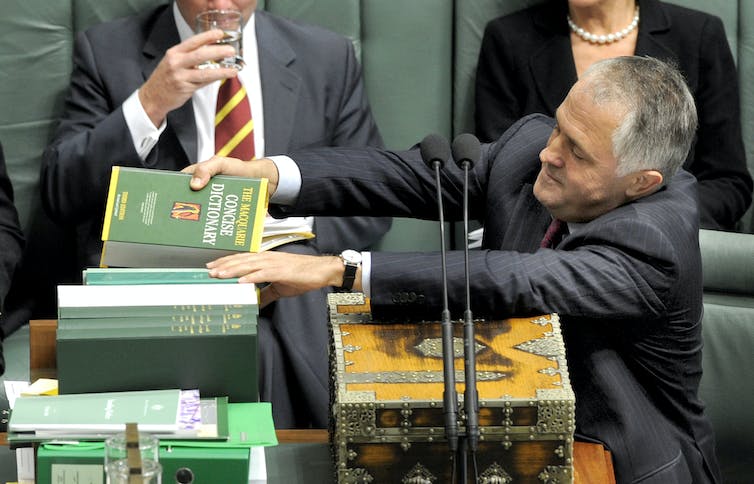 Malcolm Turnbull avails himself of a dictionary in 2008 during parliamentary question time.
Alan Porritt/AAP

Currently, there are more than 150 spin offs. There was even a Macquarie Bedtime Story Book for Children. There are, of course, other dictionaries of Australian English, such as Oxford University Press’s Australian National Dictionary, a dictionary of Australianisms first published in 1988. There was also an Australian version of the Collins British English Dictionary, which the Macquarie staff regarded as essentially British.

In 1976, the Macquarie offices moved to a former market gardener’s cottage on the campus of Macquarie University. Called ‘the cottage’, it sounds reminiscent of James Murray’s scriptorium in Oxford, where he oversaw the creation of The Oxford English Dictionary. In 1980, Macquarie Library Pty Ltd became the publisher and has held the copyright ever since, though Macmillan bought the dictionary in 2001.

Manser, who went on to become a high-level public servant, has done painstakingly detailed research for this book, with great support from former colleagues.
It is well written in short chapters. I would have liked to see an index and a time-line, but I hesitate to quibble in the face of such a splendid historical document.

Review: More Than Words: The Making of the Macquarie Dictionary by Pat Manser (Pan Macmillan).