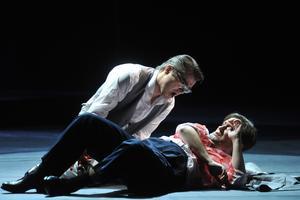 Members of the audience were alarmed from the beginning of an adaptation of Wagner’s Tannhäuser when a group of singers appeared in a glass box that slowly filled with a white fog, which was said to represent the infamous Nazi gas chambers.

While the holocaust remains a topic constantly investigated in the German arts, some felt that director Burkhard Kosminski had gone too far in this production.